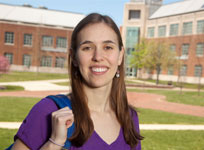 Hannah’s Biology studies have not only led to her induction into the Beta Beta Beta National Biology Honor Society, of which she was the secretary, but they have also resulted in her pursuit of various off-campus opportunities. Locally, she fulfilled a Physical Therapy Allied Health Internship with the Meadville Medical Center, helping her to gain insight about careers in healthcare. 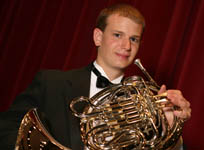 It isn’t all bacteria, microbes, and viruses for biology major Brian Herman. Although he spends much of his time in the lab doing research, he also minors in German. And he still finds time to play French horn in the Wind Symphony and Wind Ensemble. An Eagle Scout, Brian volunteers as an assistant scout leader with a local troop. He also likes to backpack, canoe, and go rock climbing with the Outing Club.