My research focuses on the action of the hormone auxin in plant growth and development and in the interaction between plant roots and soil microbes.  My students and I have been characterizing the role of auxin in mycorrhiza, an agriculturally and ecologically important symbiotic association between plant roots and fungi.  We have also begun to explore auxin as a communication signal between plant-protective bacteria and the roots these bacteria colonize.  These projects have implications for organic agriculture, because the fungi and bacteria we study reduce the need for toxic fungicides and fertilizers.

The methods my students use to study auxin responses include genetics, molecular, biochemical and physiological experiments.  As long as you enjoy working with plants, fungi, or bacteria, there are lots of different experimental approaches to choose from.  Even if you may not be interested in staying in plant research in the long term, you will find valuable techniques and analysis methods to learn here that transfer to other systems.

My general research interests lie in the area of interfacial chemical kinetics.  My investigations of interfacial kinetics utilize assembled systems such as Langmuir-Blodgett (LB) films and self-assembled monolayers (SAM).  These films consist of well-ordered mono- or multilayers and can be fabricated from almost any amphiphillic molecule.  The ordered nature of these films provides a unique opportunity to study reactions in organized media.

My primary interest is in reactions between the surface of the film and molecules from the solution or gas phase.  In this case only one reactant is “organized” or constrained while the other reactant is free to move in three-dimensions.  An understanding of this class of reactions is important when designing chemical sensors or biosensor technology.

RNA plays a crucial structural and catalytic role in a variety of important cellular processes. They are synthesized as single-stranded chains and must fold into defined complex structures, like proteins, to accomplish their diverse functions. Structural versatility is a challenge for most RNAs due to the difficulty of reaching the native folding state. Hence, protein cofactors are usually necessary to stabilize or modulate RNA folding. One type of RNA protein cofactors are the ubiquitous DEAD-box proteins. DEAD-box proteins are essential in all aspects of RNA metabolism including pre-mRNA splicing, ribosome biogenesis, RNA interference, translation, mRNA transport, and decay. These motor proteins modulate RNA-RNA, RNA-protein, and/or protein-protein interactions by utilizing nine conserved motifs to convert RNA binding and ATP hydrolysis into distinct conformational changes. As part of the helicase superfamily 2 (SF2), DEAD-box proteins are formally putative RNA helicases. However, ATP driven unwinding of RNA duplexes has only been illustrated for few proteins. The main focus and motivation of my research has been to biochemically understand the structural interactions and the role that proteins play in RNA catalysis and folding in eukaryotic RNA metabolism.

Though virtually all cells in an animal contain the same DNA sequences, different cell types (e.g., muscle cells and nerve cells) have distinct physical properties.  These differences are achieved during growth and development of the organism by switching on and off specific sets of genes within the common DNA sequence.  My research focuses on identifying and characterizing the DNA sequences that control when, where, and at what level gene expression is switched on and off in the developing animal body.  The long term goal of my research is to understand the mechanisms by which Hox proteins, involved in shaping the head-to-tail patterning of all animals, regulate their target genes.  We use the fruit fly, Drosophila melanogaster, to examine the DNA sequences that respond to the Hox protein Ultrabithorax and either activate or repress gene expression the Drosophila hindwing.  The lab uses molecular biological techniques to generate variants of sequences shown to be important for gene expression, and then tests the function of these variants in transgenic animals by looking at fluorescent reporter gene activity.  In addition, we are interested in identifying the genes that are important for morphological differences between insect species so that we may understand evolutionary changes that occur in the developmental processes that produce animal shape.

My research focuses on the obligate human pathogen Haemophilus ducreyi, the causative agent of the sexually transmitted disease chancroid.  Like other genital ulcer diseases, chancroid facilitates the acquisition and transmission of HIV.  The long term goal of my research is to understand host-pathogen interactions between H. ducreyi and humans.  Projects in my lab examine this interaction from the bacterial side of the interaction, including defining differences between the recently described two classes of H. ducreyi.  Class I and class II H. ducreyi are known to differ in outer membrane components, but not much is known about genetic differences.  Students in my lab discovered that the two classes have multiple point mutations in key virulence genes (pal, wecA, lspA2) as well as a gene commonly used to understand phylogenetic relationships (recA).  When these genes are used to generate phylogenetic trees, the class I and II strains split consistently into two groups.  Future research will focus on studying phylogenetic relationships using housekeeping genes and mutli-locus sequence analysis.

Research in the Murphree group focuses mainly on synthetic methodology, particularly through the use of sulfones. For example, the sulfone-based reagent 2,3-dibromo-1-(phenylsulfonyl)-1-propene, or DBP, reacts with 1,3-diketones to form 2,4-disubstituted furans, a structural motif found in some naturally occurring products of biological and industrial interest. 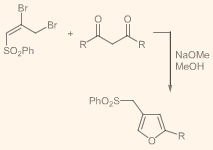 Ongoing projects are exploring the synthetic utility of this methodology, as well as the chemistry of other novel sulfonyl-substituted small molecules.

An additional research interest involves the development of more environmentally benign modifications of classical industrial syntheses through the use of catalytic methods.

I am interested in the way in which signal transduction pathways allow cells to interpret and respond to external cues during development. My research is currently focused on the role that two proteins, FbxA and FbiA, play in the development of Dictyostelium discoideum. FbxA is a member of an evolutionarily conserved protein family that regulates cell behavior by targeting specific components of signal transduction pathways for degradation. Malfunctions in this degradation system have been implicated as a potential causative agent in several human diseases, including Alzheimer’s disease, Parkinson’s disease, and cancer. Data from former comp projects suggest that FbiA may be a target of FbxA-mediated degradation. Proteins homologous to FbiA are found in a wide array of eukaryotes, including fungi, plants, C. elegans, Drosophila, mice, and humans. The function of these FbiA homologues is, however, unknown. Hence, further characterization of FbiA’s role in Dictyostelium development may shed light on the function of this conserved protein family.

Work in the near future will address questions such as: (i) when and where the FbiA protein is expressed, (ii) what signaling pathway(s) are responsible for the complex, developmentally regulated pattern of fbiA RNA expression, (iii) why the absence of FbiA disrupts pattern formation, and (iv) whether FbxA & FbiA interact in a biologically relevant fashion. Depending upon the project you choose, you might employ any of the following techniques: restriction digests, agarose gel electrophoresis, plasmid & genomic DNA preps, PCR, introduction of recombinant DNA molecules into cells (bacteria, Dictyostelium), cell propagation and sterile technique (bacteria, Dictyostelium), protein purification, protein gels, Western blots, histochemical staining, phase contrast microscopy, immunofluorescent microscopy, bright-field microscopy (stereozoom scope), and digital photography.

Research projects in my lab cover topics in molecular signaling, cell biology, genetics and cancer biology. Overarching theme of my lab is to understand cellular communications elicited by genome instability and their implications in cancer. One such communication is through a type of post-translational modification called sumoylation. Currently, there are two major goals in my lab:

1) To understand the biological significance of proteins sumoylated in response to genome instability. To this end, we use molecular biology, genetic and biochemical tools compatible with a simple model eukaryote, Saccharomyces cerevisiae. We generate mutants that cannot be sumoylated or are constitutively sumoylated to determine if altering sumoylation dynamics changes cells’ sensitivity to genotoxic agents.

2) To characterize the role of a ubiquitin ligase that targets sumoylated proteins for proteasomal degradation in the context of genome stability. We use molecular and cell biology techniques to understand if the ligase causes double-strand breaks and other forms of genome instability. These questions are addressed using both S. cerevisiae and human cancer cell lines.