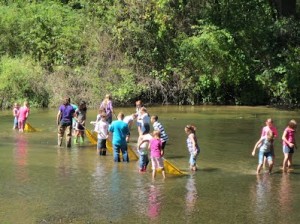 In 1995, the French Creek Environmental Education Project was founded by two Allegheny College professors with the hopes of building a successful collaboration between Allegheny and local public schools. Dr. James Palmer, Departments of Environmental Science and Biology, and Dr. Mark Lord, Department of Geology, decided to use the environmentally important French Creek and its surrounding watershed for this investigative, environmental education project. With initial funding from the Toyota USA Foundation and Palmiero Toyota, Inc. of Meadville, the project began with 6 schools. In its second year, 15 schools began water monitoring different sections of the French Creek Watershed. By the 1998-1999 school year, 22 schools and 28 teachers were involved, 6 of which were from Pittsburgh area schools.

Building upon the success and transferability of FCEEP’s watershed education model, decisions were made to expand the project for the 1999-2000 school year to include 14 additional schools in the Pittsburgh area, and a few more teachers in the French Creek Watershed. With the total of 33 schools and 44 teachers in two different corners of the state and New York, the project outgrew its name, and became Creek Connections in August of 1999. However, what has not changed is the project’s mission of bringing regional public schools an authentic natural science research experience and an appreciation for local waterways. Today, there are over 40 secondary schools and classes of over 50 teachers participating in Creek Connections.

Why the Project Originally Focused on French Creek?

French Creek is renowned as one of the most important streams in eastern North America: one that is rich in biological diversity and has outstanding water quality. The creek begins in western New York and flows south through northwestern Pennsylvania where it joins the Allegheny River. The Nature Conservancy has identified French Creek as a globally significant watershed.