Ellie Davies is the widow of Lew Davies (Allegheny Class ’40) and was married to him for 55 years until his death in 2003. With her sons, she continued to be deeply involved with the Davies Community Leader Program, established in 2004 and funded by the Davies family in memory of Lew Davies. Coordinated with the Allegheny Gateway, dozens of students have provided project-driven services to over 20 different agencies. Ellie Davies took a personal interest in the local activities of the Allegheny College students who carry on the Davies legacy of community service. She hosted biannual gatherings with these inspiring young people.

In addition to her involvement with Allegheny, Ellie was active in other community activities for many years. She was President of the Hospital Auxiliary and chairperson of the Charity Follies – appearing in most bi-annual productions. She was a charter member of the “Friends of Probationers” and for ten years participated in “Meals on Wheels” every week. Ellie helped organize the D.O.V.E. Volunteer Program at United Methodist Nursing Home (now Wesbury) and served on the Intermediate Care Facility Expansion Program. 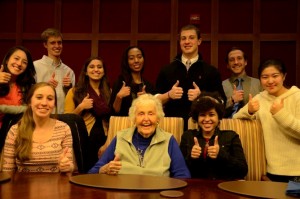 With her husband, Lew, she ran two successful United Way Campaigns, headed the Advanced Gifts Division and, in 2006, was named Honorary Chairperson of the United Way. Ellie also supported the Meadville Area Industrial Commission in 1968 by taking charge of the Speakers Bureau for the Industrial Drive. More recently, she gave a speech at their 2005 annual meeting called “Rails and Rallies” about the early days and accomplishments of the MAIC (which was founded by her late husband). Other community involvement included acting as the Chairperson of the M.A.Y.B.E. Committee that organized activities for Meadville’s Bicentennial.

Ellie also served a four-year term on the Meadville Area Recreation and Park Board at the time the Recreation Complex was planned and built. She was active in fund-raising for Conneaut Lake Institute’s Carousel Ball, the Crawford County Heritage Foundation and the Block Party of 2008 to benefit the Downtown Meadville Project. Her contributions were recognized when she received the 2007 YWCA award at the “Tribute for Women” for civic/community leadership and the 2009 Gov. Raymond P. Shafer Award for Distinguished Community Service in April of 2009. At the Cleveland Clinic’s Pulmonary Dept. Annual Research day in 2003, she was awarded an “Honorary Membership” and plaque for her speech on “A Patient’s Perspective of TB – The Way It Was”. She continued her writing with the publication of several poems about travel and family.

Graduating from Shaker Heights High School, Ellie attended Katherine Gibbs in Providence, R.I. Prior to moving to Meadville in 1943, she worked at the Sherwin-Williams Co. in Cleveland, Ohio for five years. She married Lew Davies in 1948 and is the mother of three sons – David Bainer of Barrington, R.I., Steve Davies of Brooklyn, N.Y. and Jack Davies of Washington, D.C. In addition, she has four grandchildren and one great-grandchild.

Ellie Davies passed away in May 2017 at the age of 97. Her passion, spirit, and legacy lives on through her family, the Davies Leaders, and the Meadville community.