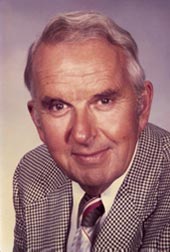 John Llewellyn (Lew) Davies graduated from High School in Sharon, Pa. In 1940 he graduated from Allegheny College with the double major in business and economics. Having worked his way through college, he formed close contacts in downtown Meadville – the basis of his enduring dedication between the community and the college and the Davies Community Service Leader Program.

Enlisting in the U.S. Navy in 1942, Lew saw active duty in the Pacific and left the navy as a Lieutenant Commander after the war. He returned to the Meadville community where, in 1948, he married Eleanor (Ellie) Bainer.

He was General Manager of an automobile dealership until 1950 when he started Davies Pontiac, which later became Lew Davies Enterprises after he acquired Jeep, American Motors, and Allegheny Rent-a-Car. He was President of the Pittsburgh Pontiac Zone Council, the Detroit Regional Council, the Pennsylvania Automobile Assn. and elected to be representative to the Pontiac National Dealer Council. In 1968, Lew received both the Pennsylvania and the National Quality Dealer-of-the-Year Awards based on good citizenship, community service and contribution to the automotive industry. After selling the car business, he expanded Lew Davies Enterprises into commercial development and partnerships in many business enterprises, as well as concentrating on his family and the betterment of the Meadville Area.

Lew was director and co-founder of the Erie-Pittsburgh-West Virginia Highway Association (I-79) and President of the N/W PA Chamber of Commerce. After co-founding the Crawford County Industrial Development Authority, providing financing to businesses through banks, he helped establish and was Chairman of the Meadville Area Industrial Commission (MAIC) to bring industry here. When it was low on funds, Lew served as Executive Director for three years at a pay of $1 a year!

Lew initiated Greater Meadville Area Day and the Winslow Award, receiving it in 1978, as well as the Keystone Award for his contribution to the economic growth in the area. He received citations from the Pennsylvania Senate and House of Representatives for his civic achievements. Lew Davies was Chairman of two successful United Way Drives. Also, he led successful fundraising campaigns for Allegheny College, the Erie Presbytery, Red Cross and YMCA, where he served on the Board. As a member of the PA. Council on Aging in Harrisburg, he co-founded and was the first President of Active Aging located in the community building on Park Avenue, named in his honor. Lew was an involved trustee at Allegheny College and was honored with the Chamber of Commerce/Raymond P. Shafer Award for Distinguished Community Service. The next year he was recipient of the Allegheny Gold Citation and, in 2000, the prestigious Alumni Medal for his outstanding loyalty to the College.

After his death in 2003, Lew’s family, wanting to honor his life, inspiration and legacy, established the Davies Community Service Leaders Program at Allegheny. They fund this project-driven program and show continual interest in the activities of the students in countless organizations in the Meadville Area where they serve.