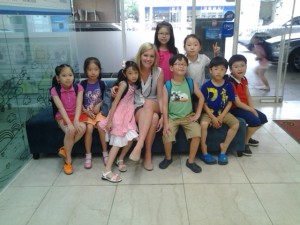 When Trista Szocs ’10, Recruitment Manager for Teach for America (TFA), chose Allegheny College, she was unsure of what career path she would follow. Allegheny’s liberal arts structure, which allowed her to explore a wide variety of disciplines, simultaneously brought her to realization and prepared her for her passion of advocating for equitable public education.

Hailing from North Ridgeville, Ohio, she dove head first into her interests, along the way discovering a love for writing, journalism, and law.

“I became interested in a variety of topics because of the many breadth of classes I was able to take. At Allegheny, you become part of a community of people who are all exploring different subjects and disciplines, generating a space to grow into your own and become a thoughtful, passionate citizen.”

In Spring 2010, Trista discovered the highly competitive TFA program through one of her sorority sisters. She applied and was accepted.

“I have always been an advocate for the underdog, but I didn’t know how that would translate into a career. There would be no intense inquiry into education if it hadn’t been for Allegheny. I chose to apply to TFA because I believe our educational system is unfair. TFA gave me an avenue to work for disadvantaged populations.”

Upon graduating from Allegheny, she spent the next two years teaching middle and high school math in New Orleans. During her time, she was promoted to instructional coach and spent half her day in the classroom, half of it coaching.

She spent the following year teaching English in South Korea. Internationally ranked as #7 in education, Trista was curious to learn more about the country’s successful system and gain perspective about how the United States might adopt some of these practices.

Seven months later, she was recruited for her current position of Recruitment Manager at TFA.

In addition to handling all TFA recruitment efforts in Louisiana and Florida, she continues to spread the word about inequality in education and the mission of TFA.

“The message I try to bring out is that our educational system is broken. We live in a country where your zip code predicts your educational opportunities. I received an incredible education. I was privileged because I went to a good public school. Everyone should have the opportunity to go to a top college, like Allegheny, and not be held back by a lack of resources in a public school. I want everyone that I meet to know that all people don’t have same opportunities. Being aware is very important. Awareness will create systems that are more fair.”