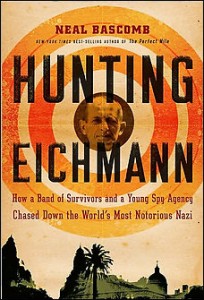 Adolph Eichmann, architect, planner, and executor of “The Final Solution” for the Jews escaped to Argentina at the end of the World War II.  It took 15 years before Mossad and Shin Bet operatives for the young state of Israel discovered his whereabouts, kidnapped him, and returned him to Israel for trial.  That trial placed the Holocaust on the world stage.   From the start of the book to its final page Bascomb lets the facts speak for themselves.  Without over dramatization he recounts the words of Holocaust survivors who have become defenders of the new state of Israel.  They explain their plans and the risks required to kidnap a Nazi on foreign soil.  Simultaneously, Eichmann provides his twisted explanation of the need to eliminate the Jewish people.  The Spartan account is chilling and riveting.