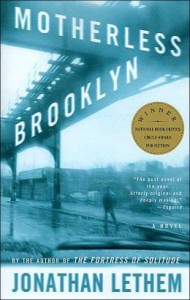 Lionel Esrog, along with three friends, is plucked from a Brooklyn orphanage by Frank Minna, a self-made detective and small time Brooklyn nogoodnik.  Early in the book, Minna walks into a trap leaving his four offspring to solve the mystery of what happened to their boss.  Lionel lets you know in the opening lines that he has Tourette’s Syndrome.  He obsesses on numbers and patterns, word tensions explode in his mind and burst from his lips:  EAT ME, BAILY!  As he works to solve the mystery, Lionel becomes a full human being, far deeper, funnier, and more intelligent than we, or anyone around him, gives him credit for.  His fellow Brooklynites refer to him as FreakShow, and we do, too, until slowly we recognize how automatically we have categorized Lionel because of his ticks and squirms.  The supporting cast, including the entire borough, are superbly rendered.  Every voice retaining its original Italian, Jewish, or out-of-city origins with precise adjustments for the age of the speaker.  The mystery is fun and funny enough, but Motherless Brooklyn is a must-read because its characters and sense of place  lodge in your head like one of Lionel’s numerical obsessions, a friendly itcth that cannot be ignored.