In the closing days of WWII, as the Allies are conquering northward up the Italian peninsula, the Germans are beginning to retreat, and their Italian allies are bumbling.  Venice, though under German occupation still, is spared American bombing runs.  In the lagoons beyond the city, Cenzo, an insightful, witty fisherman, finds an 18-year-old Jewish girl, Giula Silber, floating face down, but still alive.  Giula and Cenzo must outwit Nazis hunting for her, black marketeers willing to trade in everything from human cargo to peace initiatives, Italian Fascists, anti-Fascist partisans, Cenzo’s dubious older brother, and his indomitable mother. The writing is spare, occasionally too lean, so that some characters and a few of their actions are veiled in a Venetian mist, and yet, in sum, the disorder imposed of a World War on the daily lives of bartenders, fishermen, backwater diplomats, and indulgent Italian mothers emerges with the piquancy of fresh polenta. 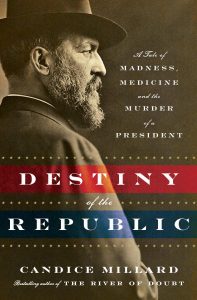 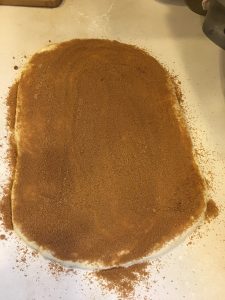 My friend Jen came over for a sticky bun bake off.  I went for a sourdough, pecan sticky bun and Jen prepared a sourdough cinnamon bun with cream cheese and butter frosting. Baking these pastries involved two conflicting dramas for me.  On the one hand, it meant I had to carefully follow a recipe, not one of my cooking attributes.  On the other, I love pecan sticky buns, and ever since having eaten a sourdough sticky bun at Arizmendi Bakery in San Francisco that changed my life, I knew I had to give it a try.

Once the dough had risen, I rolled it flat, painted its surface with melted butter, and covered it in brown sugar and cinnamon.  I rolled the dough into a tube, sliced the tube into small cylinders and laid each one on a bed of chopped pecans. 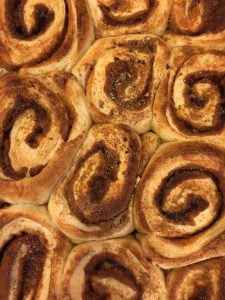 Here they are in the pan, but you are looking at the bottom.  They have to be flipped and then they look like THIS.

The funny thing is because I followed the recipe and cooked the buns for precisely twenty-two minutes at 400 degrees, they came out undercooked in the middle.  The dough was still a little creamy.  Next time I bake at 325 degrees (like a challah) for forty-five minutes and leave space between the buns so the outer crust of each one gets crisp.

Here is what Jen’s cinnamon buns looked like.  Pure awesomeness. 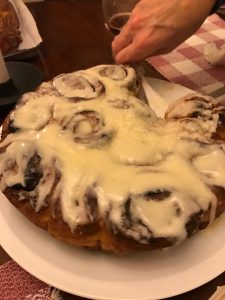 It was an excellent dessert to follow on a vegetable-infused pasta smothered in a tomato sauce that Isaac prepared with seared disks of homemade sausage, halved brussel sprouts roasted in the sausage fat, and red wine.  He reduced the sauce until it was thick as a cassoulet and dark as burgundy.

While we are on the subject of Isaac’s kitchen creations.  Here are a couple of rosemary, olive oil fougasse that he made (left)

and some bagels he helped prepare. 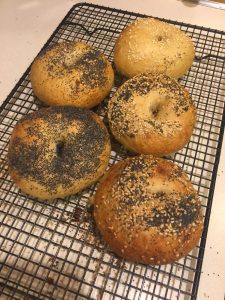 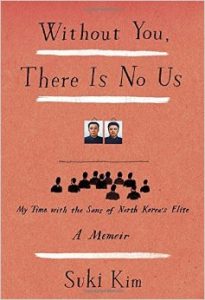 Suki Kim spent six months teaching English to the sons of elite North Koreans enrolled at Pyongyang University for Science and Technology (PUST), an evangelical college in the world’s most secretive nation.  Kim is neither a teacher nor a practicing Christian and yet maintained her cover despite being entrapped on the campus — there is no free travel in North Korea — and watched round the clock by North Korean minders.  What strikes Kim as most frightening is the total dependence of North Koreans on their Dear Leader who provides for jobs, food, beliefs about their past, their relations to others, and their future.  Free will has been utterly squashed.  Until she attends a Sunday morning prayer session with the Christians who run PUST and recognizes that entreaties of administrators and missionaries are virtually the same as what is broadcast on North Korean television.  She needs only to exchange the names of Kim Jong Il and Jesus.  She laments the inability of her college students to access the Internet, convinced that if only they could understand how much knowledge there is in the world each one of them would be free.  She wrote the book just two years before American Evangelicals, Fake News and post-truth politics cherry-picked from the Internet by his supporters led to the election of Donald Trump. 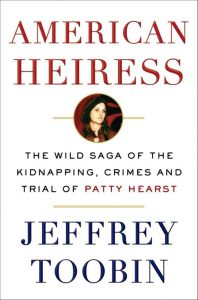 Patty Hearst was the daughter of one of the wealthiest and most influential media men in American history (think Fox News) when she was kidnapped in the early 1970s by a shadowy radical group called the Symbionese Liberation Army.  During her months of captivity, Patty Hearst came to sympathize with her anti-establishment captors, going so far as to rob banks at gunpoint, and firing weapons at innocent bystanders.  Toobin does a reasonable job of setting the context of the period: the Vietnam War was refusing to come to an end, African Americans were raging against oppression, women were recognizing their own restrictions, drug use was up, domestic bombings by radical groups against symbols of government and police brutality were in the thousands, and the country was divided between blue-collar supporters of law and order and youthful proponents of peace and equality.  A lot like today’s red-blue divisions. Toobin’s fundamental question is whether Patty Hearst’s law-breaking escapades were the result of her kidnapping and fear for her life if she did not act in accordance with her kidnappers, or whether, as the historical record indicates, Patty voluntarily switched allegiances, moving from far right to far left, and was responsible for her own actions.  The question of the extent we are responsible for our own behaviors or are swayed by larger societal forces is a great question, but unfortunately, it is buried for most of this book as the moment-by-moment details of the kidnapping ordeal are laid out. 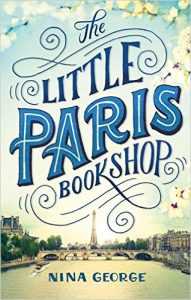