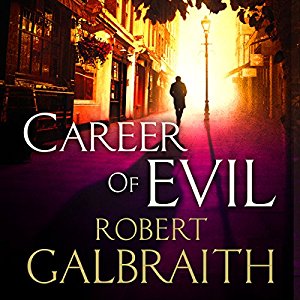 This is the third in the Cormoran Strike series of murder mysteries written by J.K. Rowling under the Galbraith pseudonym.  In this case, a psychopath murders women, pulls apart their bodies, and as the book opens, he hand delivers a severed leg to Strike’s assistant, Robin Ellacott.  Four potential suspects immediately come to the mind of private detective Strike.  While  Strike and Ellacott investigate four bad men have a motive for wanting to ruin Strike by accosting his assistant, the British police bumble about like Keystone cops. Meanwhile, what was obvious to us in book one, now dawns on Cormoran and Robin: they are in love with one another.  Unfortunately, Robin prepares to get married to her long-time fiancee and Cormoran dallies with a sexy, but not very interesting girlfriend he has picked up on the rebound from his last relationship.  Rowling’s strength lies in her observations.  She lands her protagonists in a town, and I know now, after having been to some of the places described in this book, describes every important storefront and unusual curve in the road with delightful accuracy.  She hears every dog bark, recalls what everyone she met along the way was wearing beneath their overcoat, and reproduces accent and dialogue with impeccability.  For sense of place and character she is a fine read.  This mystery was gruesome, the budding love affair formulaic, and her lengthy descriptions were sometimes tedious.