James Boylan, a college classmate of mine, and chair of the English Department at Colby, at the age of forty could no longer bear the pressure of living in the wrong body and became Jennifer Boylan. With an ample supply of good humor and equal dose of pathos, she describes what it takes to change genders even after being married and fathering two sons. She’s one of the few people to know what women talk about in public restrooms and what men don’t say in the men’s room, and to compare the ease of purchasing dungarees in the men’s department versus the insuperable challenges of buying women’s jeans. Which is all to say she supplies a credible voice for what it takes to be a woman in America even for someone not women-born. October 2005 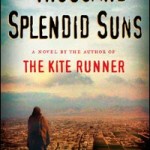 A bottomless well of hopelessness, despair and background warfare in Afghanistan from the Soviet invasion of the 80s through the American invasion post 9/11. Seen through the eyes of two women who lose nearly everything they can imagine either blown to bits around them or whose common husband senselessly beats them. And yet. Hosseini’s crystaline writing and, in my case, Atossi Leoni’s heart wrenching reading simultaneously suffocated and repelled me. I wanted to stop the pain, but could not turn away; instead I lay awake for nights praying for salvation for Leilo and Miryam, two women who endured. December 2007

Both of my parents, and the critics, raved about this book, so take my review cautiously. The story revolves around the meticulously described single day of a neurosurgeon in London as he wrestles the inner demons we all face — self doubt, fatigue, the challenge of ageing, parenting — and the external terroristic demons of the post 9/11 world. The author provides exceptional insight into the protagonist’s state of mind while playing off a turbulent backdrop of an anti-Iraq-war protest in London. A squash game covers a dozen pages and is described so accurately you can hear the ball pop off the front wall. In fact, you’ll be breathless and perspiring by the fourth of five games. On the upside, too, the main characters are all nice people. The neurosurgeon’s family, in contrast to the depressing majority of recent publications, is entirely functional. Perhaps, it was my mood, however, but all the detail left me impatient for action. At least for the first half of the book, the part I read, not much of consequence happens. It’s just one long day, Saturday, in the life of a doctor. Obviously, if you’re in the right mood, this book could be a winner. July 2005.

Christopher Boone has Asperger’s Syndrome and Haddon’s book is the best portrayal of what goes through the mind of a young teen who is simultaneously a brilliant mathematician and incapable of comprehending facial expressions, other people’s emotions, or jokes, to name just a few symptoms. The book follows Christopher’s attempts to write a mystery book about a murdered dog and does an astonishing job of describing what a wonderful kid he is and how unbelievably challenging it is to live with him. January 2007.