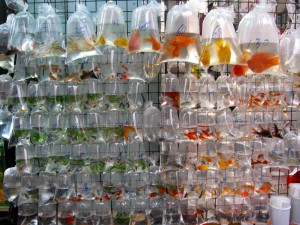 Hong Kong, March 11, 2010
The weather in Hong Kong on my last day fit my mood.  Light rain and mist.  Less than a tenth of an inch of precipitation, but enough to soak my clothes and my psyche.  After twelve days of travel in six airplanes, two trains, two vans (neither with seat belts), several taxis, an old Chinese-made car, two ferries, a bamboo raft, a bicycle, and never more than two consecutive nights in the same bed, I didn’t want to get out of mine this morning.

I holed up in my hotel room watching badminton championships on TV and the medically assisted birth of a baby zebra hailed as a veterinary breakthrough by one of mainland China’s news programs.  In the last four days I’ve floated in a two-person boat on the Li River, hiked from the top of a mountain of rice terraces to the river valley below, an elevation drop so great my half-filled water bottle collapsed under the changing air pressure, and pedaled my way through countryside so removed from urban China that farmers and their pigs share cesspools.  I had to force myself to face the city of Hong Kong. 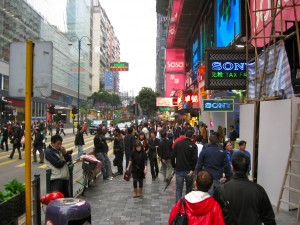 I got myself to the tourist bureau to get directions for a walking tour.  I wanted to take the tram to the top of Victoria Peak.  The panoramic view of the city is supposed to be spectacular and who wouldn’t like a tram ride up the side of a mountain?  But as I made my way toward the ferry to cross from Kowloon to Hong Kong, I noticed the top of the city skyline was already obscured in fog.  Maybe later.

Changing my plans, I walked north on Nathan Street, instead, doing my best to fend off pamphleteers and street hawkers.  “Hey,” says an Indian, “I can get you a great price on a suit.  Pure wool.  Tailored, fitted, very quick.”  He sticks to my side for half a block.

This isn’t like my solo hike up Moon Hill.  I didn’t like being alone there, either.  My mind was walking faster than my feet.  I wanted to say judgmental things to Sue about how loud and critical all the Americans on the trail were.   I had wished she were by my side to help me make sense of the old village women hauling water to the top of the trail for foreign hikers.  I wondered what she would have thought about the quality of the handicrafts being sold now in Yangshuo the tourist town.  I wouldn’t be surprised if I were talking aloud while I climbed. 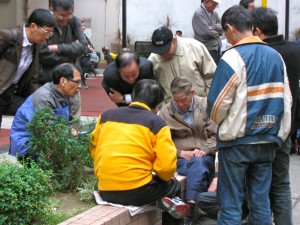 Walking the crammed urban byways of Kowloon, I have the added burden of having to wear my city face.  The more I appear hesitant the more likely I am to be targeted by insiders looking for outsiders.  So even though I haven’t the sense of direction to find my way to the bathroom of my own house if you spin me around, I walked Kowloon intentionally like I had a destination.  My stern demeanor seemed to keep the suit sellers at bay.  The same for the pamphleteers pushing eyeglasses, video cameras, and Buddhism.

I walked for hours discovering the ladies market and the dildo market.  They’re different.  The first sells blouses and pajamas to women and the second sells some of the largest plastic gadgets I’ve ever seen to men who must think women like them.  I found the laminate flooring market and four blocks of tropical fish for sale, electronics stores and a dozen kitchen supply stores.  Not one carried a tofu press.  I guess you can buy fresh tofu in Hong Kong so why make your own.  I went around the flower market and didn’t linger at all in watches and jewelry.  There were a lot of leather belt sellers.  By the time I was headed home the night market was gearing up to sell tsotschkes to Australian and American tourists hunting for bargains.

Still, I must have looked very tense all afternoon, like I would rather have been anywhere else but here at this moment.  I don’t know how else to explain the continued attention I received block after block from young women offering me a massage.  It’s really a very thoughtful city, after all.

One Response to “Dildoes”