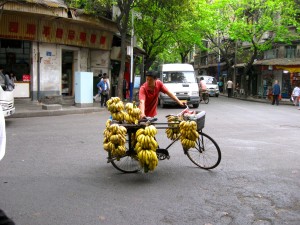 Bananas for sale the old fashioned way in Qingping market

At the outdoor market I can still find live scorpions and buy meat hacked in inch-long segments with huge cleavers starting at one end and continuing until you are out of tail.  There are herbs and mushrooms and a long list of things on my tape recorder, but there weren’t any shoppers.  True it was a Thursday morning between 9 and 11, but no one was buying.

I always visit markets.  They are more interesting to me than museums.  That’s true in rural Ghana or in Portland, Oregon.  In one you find everyone selling mangoes because they are ripe on everyone front yard and they only sell for a penny or two  because supply is so much greater than demand and no one has a car to bring them to another market.  In the other you can find organic, sustainably produced, locally made with a hand drawn sticker on the returnable bottle, pressed wheat sprout juice (filtered water, of course.)  You learn about societies by their markets.

Our driver, John, they choose their own names, the other driver chose Air Jordan, said the Qingping market is out of date.

In Qingping you pick meat up with your hands, ask for a knot of live eels, get handed a dried snake (you pick whether you want it straight as a stick or coiled like a LP record).  In Jusco, the upscale grocery store in the ten story mall, every orange was wrapped in its own plastic wrapper.  Kiwis wrapped in plastic.  Soybeans are vacuum packed in plastic and then overwrapped in a second layer.  Even the organic ones (what in the world is Chinese certification for organic? And what is it worth if the air is totally polluted?  And the water?  And the soil has more heavy metals than a car factory?  Are we grateful at least there are no pesticides?  And the carrots are individually wrapped in plastic produced at a plastics factory with no emissions controls?  Maybe this is progress? 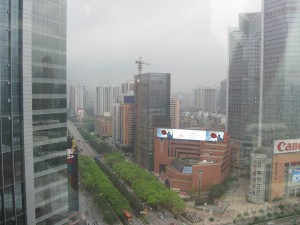 Organic only showed up in China markets last year and now Allyson can find it almost any store in Guangzhou where upscale Chinese moms can come to Jusco to purchase organic produce to bring to their Ai-ee to cook for their one child.

Other thoughts.  I was supposed to register with the Guangzhou police within 24 hours of arriving in the province because I am not staying in a hotel and the police need to know where I am.  Turns out when we went to the local, not the regional police station, and I was only going to be in the complex for 24 hours, then in Hangzou, then back for 24 hours, then in Yangzhou, then back for 24 hours, then back to Hong Kong the police said they’d let me go this time.  That took four phone calls from the complex’s police office, where they had a full cabinet displaying female contraceptives, to finish the transaction.  That means I am a fugitive living with an international bread smuggler married to a the acting chief consular officer for the Mexican government to China.

One Response to “Qingping Market”