Austin Cosgrove ’15 and Cailyn Lingwall ’15 recently presented research at the Undergraduate Research at the Capitol conference held in Harrisburg. Austin’s project was titled “Meadville’s Community Health Needs Assessment: A Retrospective Secondary Analysis of the ER Records.” He conducted this research last summer with Assistant Professor of Biology and Global Health Studies Becky Dawson. The project was funded by the Meadville Medical Center Foundation. Cailyn presented her senior project research, titled “An Evaluation of Physical Activity among Preschoolers at an Income-Eligible ‘Pre-K Counts’ Program in a Rural Northwest Pennsylvania Community.” Cailyn is working with Associate Professor of Environmental Science and Global Health Studies Caryl Waggett during her Senior Project. Austin’s and Cailyn’s conference travel expenses were supported by a grant to the Global Health Studies program from the Howard Hughes Medical Institute. 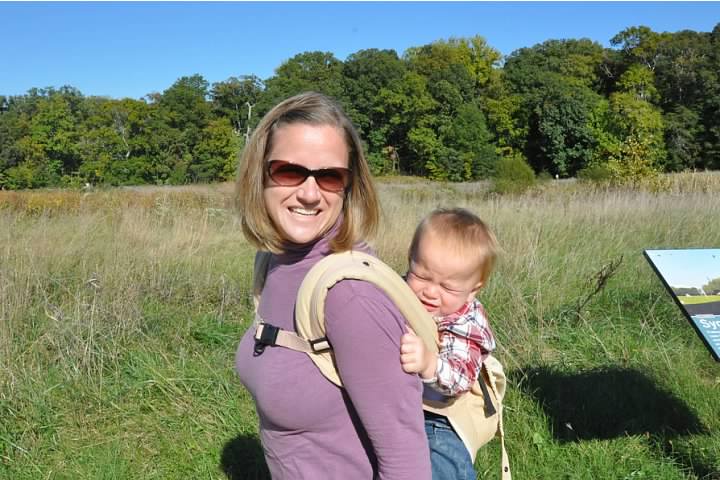 Rebecca Dawson, Allegheny College assistant professor of biology and global health studies, has been named to NerdScholar’s list of “40 Under 40: Professors Who Inspire.”

According to NerdScholar, the professors were chosen based on “their ability to captivate and engage students in the classroom, their outstanding involvement on campus and in the community, and their overwhelming passion for their subject matter.” Nominations were collected through student, alumni and faculty recommendations following an open call to several hundred colleges and universities across the country.

“Receiving this award is such an honor,” says Dawson, a native of Allison Park, Pa. “It is so very special to me because my nomination came from my students. They are what make this job so great; to know the feeling is mutual is priceless.”

Senior Erica Bryson, one of Dawson’s students who nominated her for the award, says you can tell by Professor Dawson’s enthusiasm and energy in class that she loves the material she is teaching. “Professor Dawson is a practice-what-you-preach type of person as a result of her passion in epidemiology, and she encourages those around her to do the same,” Bryson says. “I know she puts 100 percent into everything she does, and I am honored to have her as a professor and mentor.”

Sophomore Matthew Zaborowski, another student who nominated her for the honor, agrees. “Being an Allegheny College alumna, Professor Dawson is very passionate about the liberal arts and the environment and atmosphere that each student displays while attending Allegheny. She is a true inspiration, a great role model and a wonderful professor who is caring, committed and passionate,” he says.

In August 2014, she collaborated with a professor at George Mason University to publish the first undergraduate textbook on epidemiology titled “Understanding Epidemiology: Concepts, Skills & Applications.”

About NerdScholar
NerdWallet is a consumer finance website that helps people make better decisions when it comes to their money. NerdScholar is the higher education branch that offers advice and resources specifically for students. 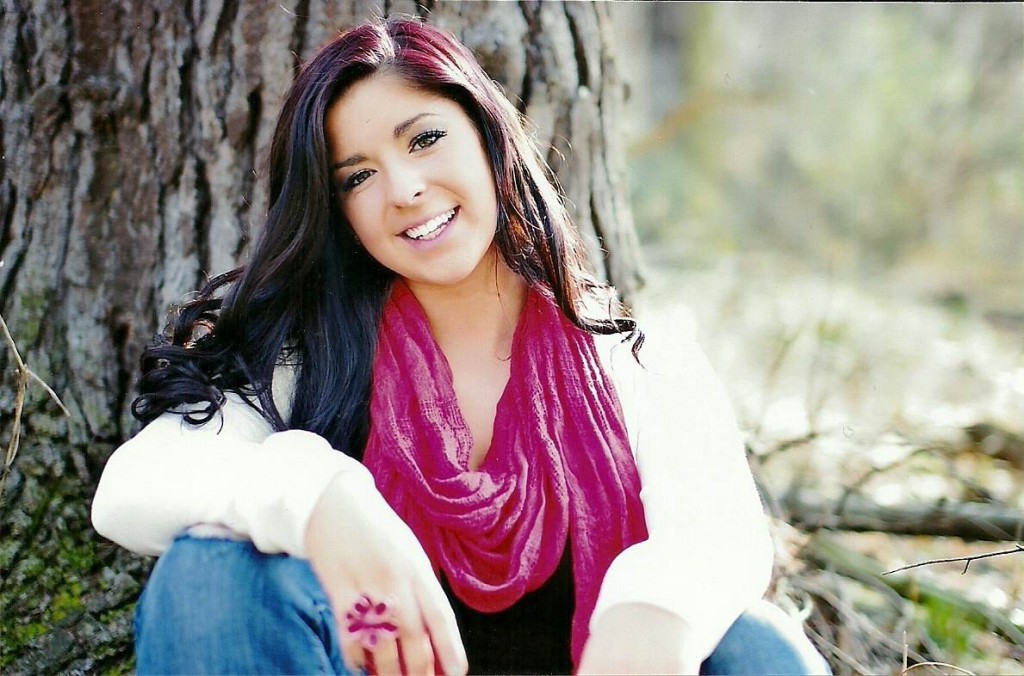 Almost anyone can make a meal out of what they dig out of their fridge and pantry, but not everyone has Madison Monahan’s flair for making it look scrumptious.

Maddie, a senior at Allegheny College, is pursuing a degree in Global Health Studies with a minor in French.  She spends much of her free time in the kitchen, pursuing her passion for cooking and then sharing photos of her creations online through her Instagram account. Here you’ll find dozens of Maddie’s home-cooked meals from Spaghetti Squash Boats to Spinach and Feta Chicken Roll-Ups.

Her family, particularly her father, inspired her interest in all things culinary, Maddie says.

She started helping her father around the kitchen around the age of 6. “I always wanted to help my dad and he would say, ‘You can help by watching,’ and I would get really mad because I wanted to get involved in the cooking. But in the end it is the watching that helped me the most.”

Cooking will always be a “cool hobby” but probably nothing more, Maddie says. “I love what cooking does to me. It really relieves my stress,” she says. “I don’t really have serious intentions with it in the future, but I love having cooking be part of my life, even if it’s just a hobby.”

It is this relaxing influence that helps Maddie balance her studies and her cooking. “You know how people decide to take study breaks and go drink coffee or something? I’m like that, but I just go cook lunch,” she says.

While Maddie has been cooking for years, she did not start using social media to showcase her talents until her sophomore year. “I figured that if I started posting these photos, I would inspire other people to start cooking,” she says.

She also tries to incorporate her cooking into her academics. (The Pittsburgh native is also president of the Advocating Global Health & Development Club and a student first-aid provider/ athletic trainer.)

“I just try to find other ways to incorporate it in my life, like for school projects. We did a recipe book for refugees in one of my classes last year.” Maddie says, “We took all the ingredients that you can find in other countries but that cannot be found here and I found a way to locate some substitutions for them. So that’s my way of incorporating the expression of cooking in my life.”

During the past summer, she stayed in Meadville and enjoyed going to the Second Saturday events organized by the Market House. “I love produce stands, and farmers’ markets are some of my favorite things. I love supporting local businesses and seeing what they have to offer. I also love seeing what the community does with the produce,” she says.

She also bought seeds from the Carrden — the Carr Hall hands-on learning and teaching garden for the Allegheny campus and community — and planted her own garden which allowed her to have fresh produce regularly.

It all makes for a recipe for fun and frugality, Maddie says. “I think it would be nice for people on campus to have a club that would reach out to them and show them that you can cook on a nice tight budget. It’s not as hard as people think it is!” 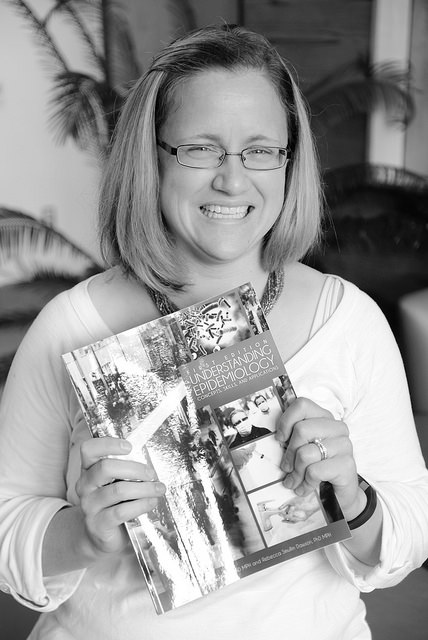 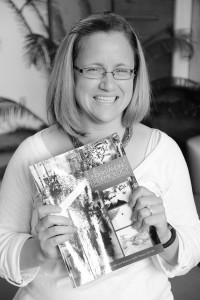 Professor Rebecca Dawson of the biology department published the first undergraduate textbook on epidemiology this summer. Photo by Amasa Smith.

Dawson’s textbook focuses on teaching students to think critically about global health issues with the use of exercises and case studies.

After being unable to find an introductory textbook to epidemiology, Dawson and Poms came together to create one of their own.

“It’s written for an audience who not only want to do epidemiology, but also for those who know nothing about it and may never study it again,” Dawson explained.

Professor of Biology, Neuroscience, and Global Health Studies E. Lee Coates and Professor of Physics Dan Willey recently presented “Development of an Undergraduate Research, Scholarship, and Creative Activities Office at Allegheny College” at a Council on Undergraduate Research workshop held in Alexandria, Virginia. Coates also presented “Development of a Summer Research Community” during one of the workshop sessions.