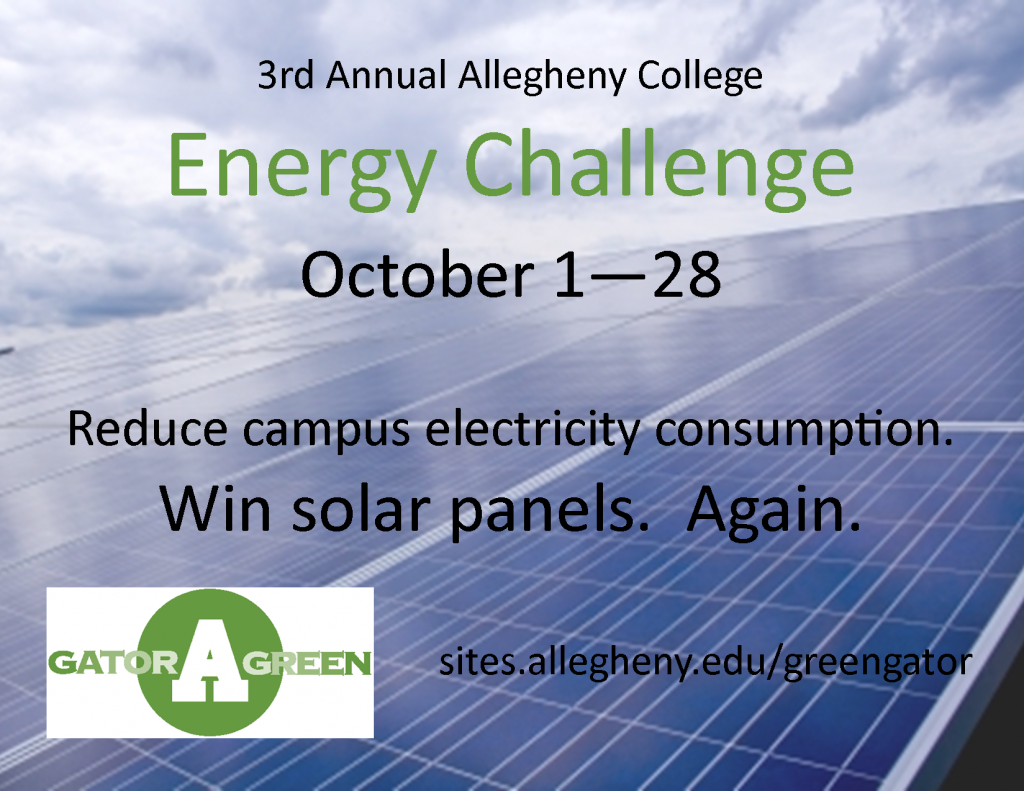 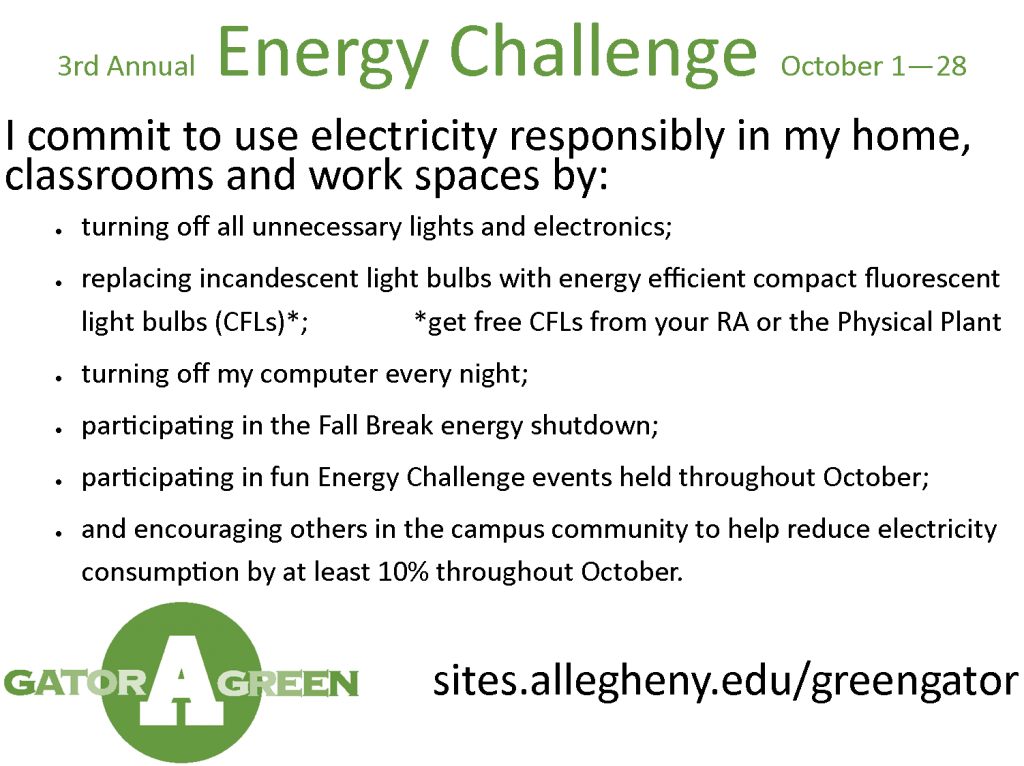 On Monday, April 23rd at 8:00 p.m. there will be a screening of “Eating Mercifully” in Schultz Banquet Hall. The documentary is about factory farming and ways to be more aware of where our food comes from and how animals are treated. We’ll be watching the film (which is about 25 minutes) and then Professor Faith Bjalobok from Duquesne University will be speaking about factory farming and how her own farm animals live. People will be able to sign letters against gestation crates for pigs and to improve conditions for laying hens. Factory farming is a really big issue that everyone should be aware of and this screening is a great way to get more involved.  If you have any questions, please contact Brynya Bowden <bowdenb>.  Hope to see you there! 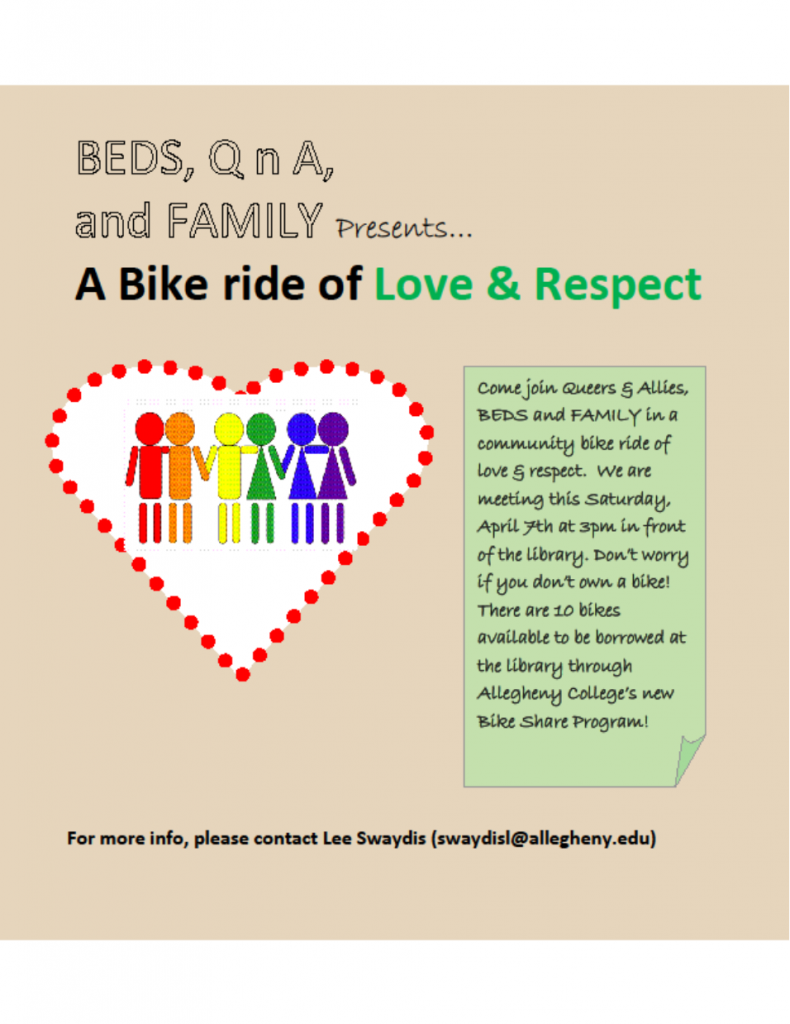 It’s no surprise the compact fluorescent light bulbs, or CFL’s, have become widely used.  Compared to a traditional incandescent bulb, a CFL requires about a quarter of the energy and lasts up to 10 times longer, which saves money and energy.  However, the contents of the CFL have caused concern among customers.

On average, a CFL is likely to contain 4 milligrams of mercury.  Mercury, which was once present in household thermometers (that contained about 15 milligrams of mercury), is known to have detrimental effects on the nervous system, especially in children and developing fetuses.  With this potentially harmful chemical being contained by nothing but some fragile, glass tubing, legitimate concerns about the safety of CFL’s have emerged.

One major source of unease is the disposal of the bulbs.  When they break in a landfill, will mercury seep into soil or water sources, or will it evaporate into the air?

Of course, keeping mercury out of natural spaces is important.  If mercury, specifically in the form of methylmercury, enters certain ecosystems, it gets passed up the food chain through a process known as biomagnification.

Many lakes in the U.S. contain fish with staggering levels of mercury. [Source: U.S. Geological Survey]

Surprisingly, using CFL’s will theoretically reduce the amount of mercury to enter these natural spaces.  As mentioned previously, CFL’s use about a quarter of the energy that incandescent bulbs use.  The energy to power the bulbs is likely coming from a coal plant.  Coal naturally contains traces of mercury, and when the coal is burned, the mercury is released into the atmosphere.  So, burning coal to harness energy to fuel an incandescent light bulb will emit more mercury than in the case of a CFL because the incandescent requires more energy altogether.  For this reason, Julianne Pepitone at Popular Mechanics asserts that the total mercury emission resulting from the use of an incandescent bulb will exceed that of a CFL by 4.65 milligrams (source).

So, to reduce the amount of mercury being released into the atmosphere, use CFL’s.  But, be sure to dispose of them properly.  Many communities have environmental services that take care of recycling potentially hazardous waste, like CFL’s.  For Meadville, ECS&R is a reliable source.  As mentioned in the Popular Mechanics article, Earth911.org can help readers locate such service centers.

Free CFL’s are available for Allegheny College Students!  Contact an EcoRep for your free bulb. 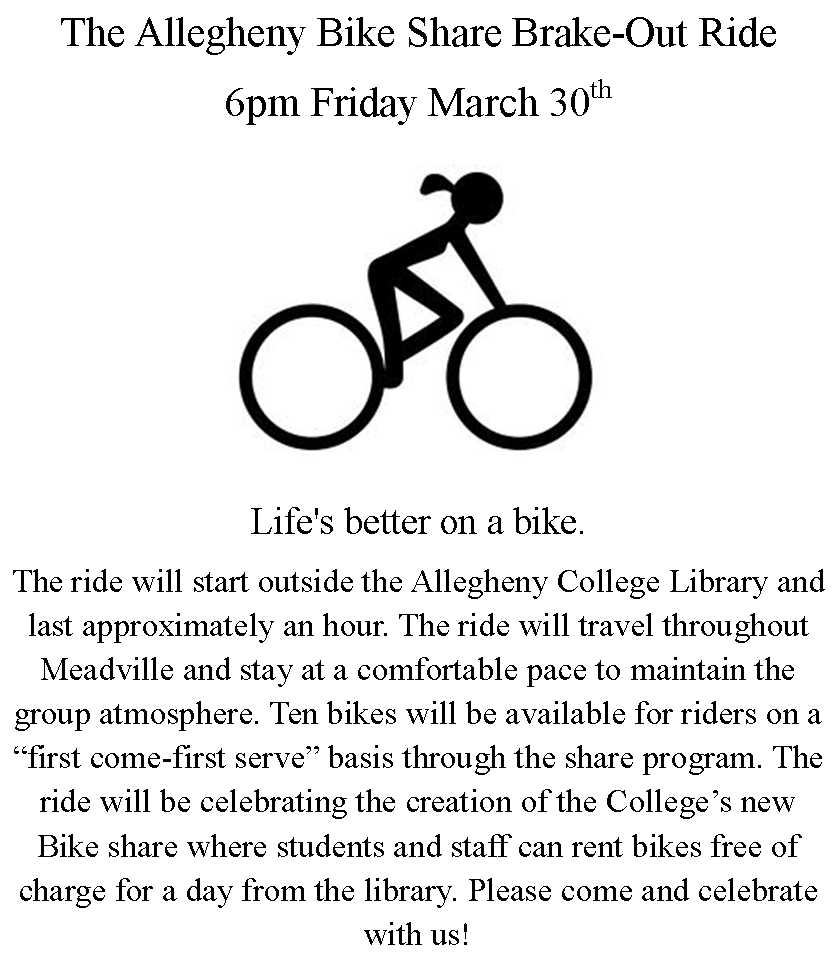 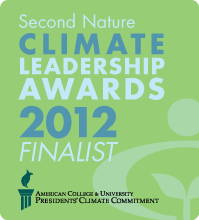 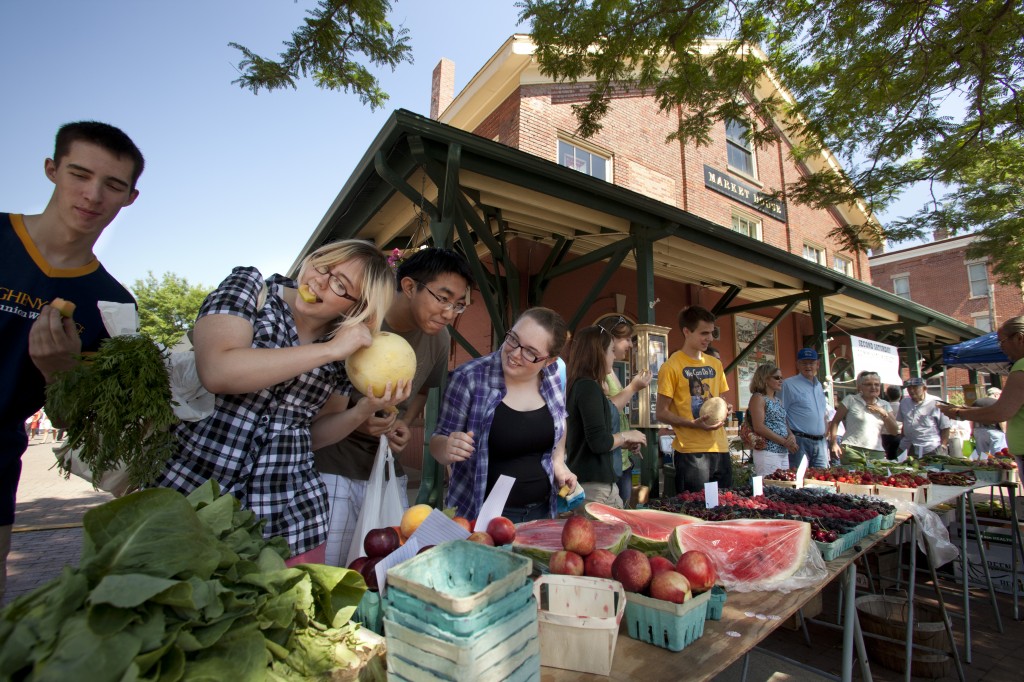 Allegheny is a finalist for Second Nature’s 2012 Climate Leadership Award. Check out our video and “Like” it to vote and help us win! Please share this far and wide! 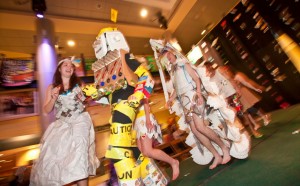 On March 3rd 2012, Students for Environmental Action & the Eco-Reps co-hosted the innovatively creative Third Annual Fashion Trashion Show in hopes of emphasizing the importance of waste minimization in a fun and engaging manner. Over 16 models representing various campus groups like Grounds for Change and Green Living & Learning Community strutted down the green runway fashioned in outfits made from assorted materials from bottle caps to toilet paper rolls found in their trash bins. 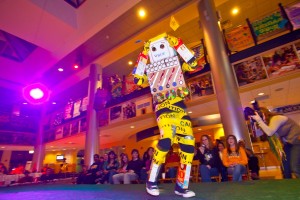 In the days leading up to the event, designers brainstormed their ultimate costumes that displayed their inspirations from robots to classy Victorian ladies. Putting together these outfits was no simple task either as seen by hot glue gun burns and the sewing needle pricks. Overall, the hard work paid off and the audience including guest judges was captivated by the spectacular show and excited about the gift giveaways

Congratulations to the following groups: 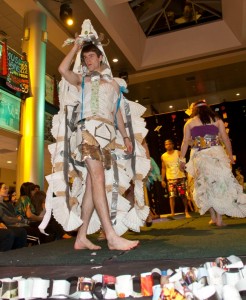 Model: Aubrey Morano
Designer: Elizabeth Ozorak for Rags to Riches
Materials used: Jacket made from coffee bags collected since September and the rest is packing supplies and chocolate wrappers. 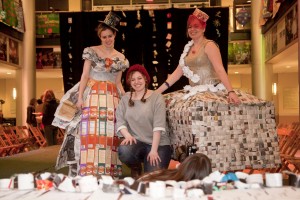 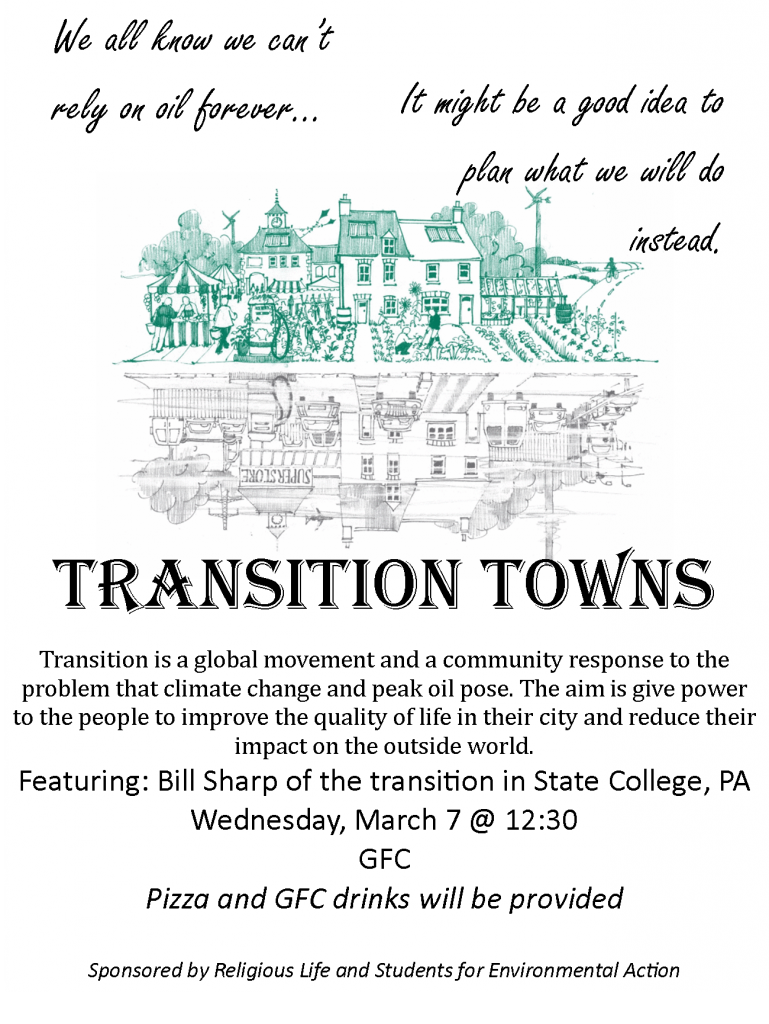 Come learn more about emerging transition towns with Bill Sharp, guest speaker of the transition in State College, PA. The discussion will happen this Wednesday at 12:30 pm. Lunch is covered with FREE pizza and GFC drinks! 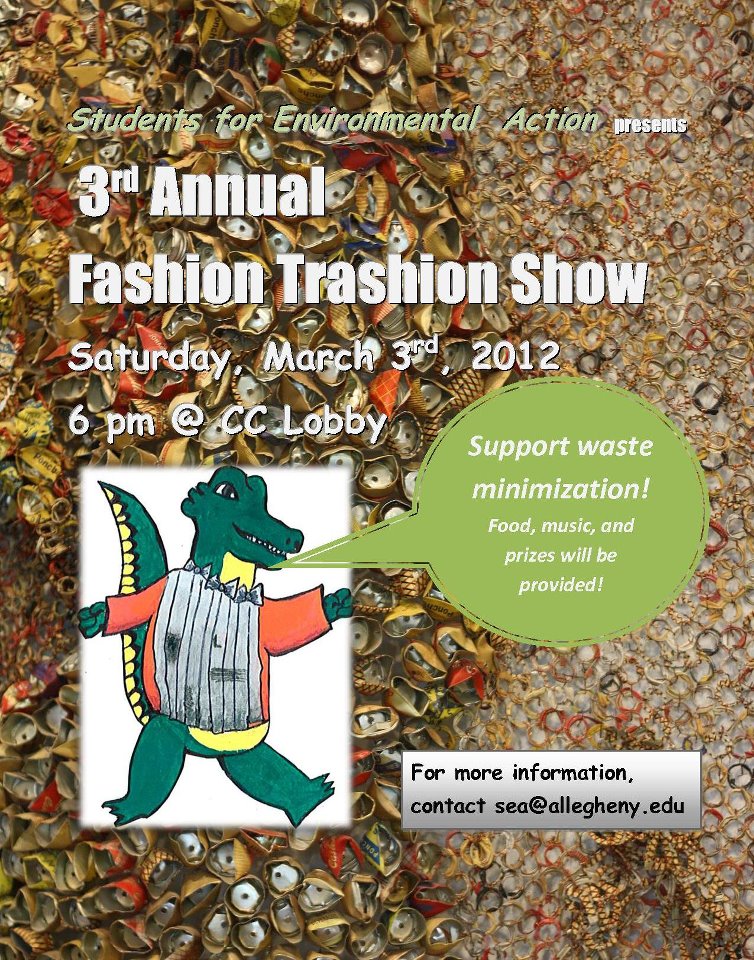