Documents of War: The Ethics and Challenges of Visual Storytelling 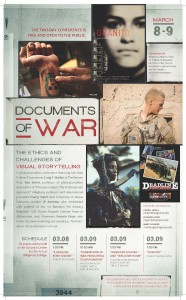 On March 8 and 9 (Friday and Saturday), Allegheny will host a mini-conference on the visual representation of armed conflict.  “Documents of War: the Ethics and Challenges of Visual Storytelling” will feature the following presenters:

These guests, along with Allegheny students, will present their work and discuss with attendees the challenges and implications of representing their subjects. The conference will wrestle with timely moral, aesthetic, and political questions for a world increasingly eager for visual evidence of suffering.

The conference also will include an exhibit of photographs from the Nuremberg trials, on loan from the Robert H. Jackson Center in Jamestown, N.Y.

Sponsored by Allegheny’s Center for Political Participation, the Provost of the College, and the Robert H. Jackson Center, the conference itself begins Friday, March 8, at 7 pm, with a showing and panel discussion of Deadline Every Second at the Vukovich Center.

All events are free and open to the public. All events will be at the Vukovich Center.

March 8 at 7 p.m.–“A Deadline Every Second”  Film by Ken Kobre, with panel discussion to follow.

March 9 at 10 a.m.–Generation of War: From Africa to Afghanistan with Cheryl Hatch and JR Ancheta