Oct. 12, 2012 – Maria Vargas, director of the Better Buildings Challenge at the U.S. Department of Energy, spoke at Carr Hall at Allegheny College today at a ceremony to dedicate the Richard J. Cook Center for Environmental Science. Vargas also serves as a senior program advisor in the Office of Energy Efficiency and Renewable Energy at the Department of Energy.

Following the dedication, Sir Peter Crane was the guest speaker at a dinner – featuring locally grown foods — to honor Richard Cook, president emeritus of Allegheny College and a national leader in sustainability efforts at colleges and universities. Crane, former director of the Field Museum in Chicago and of the Royal Botanic Gardens at Kew, has been Carl W. Knobloch Jr. Dean of the School of Forestry and Environmental Studies at Yale since 2009. 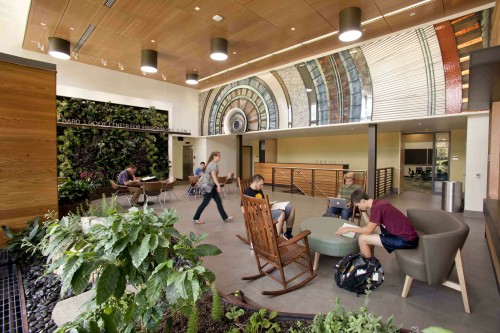 The Richard J. Cook Center opened in August as the new home for Allegheny College’s Department of Environmental Science, one of the oldest and most respected environmental science programs in the country. The lobby features a working model of an aquaponics system with marigolds and koi in interconnected tanks. Another, large-scale aquaponics system in a lab grows tilapia and romaine lettuce for use in the college’s dining rooms. A living wall designed by students includes a variety of plants watered from a rainwater catchment system that drains from the building’s roof.

The building also features solar panels and a performance monitoring system installed as part of a Senior Project by Carlyn Johnson, who majored in physics and environmental science at Allegheny; day-lighting through solar tubes to enhance natural light; and the use of innovative building materials such as sorghum board, bamboo and carpet squares made with recycled content.

The lobby features an installation by Jan Loney, a Pittsburgh based artist who visits scrapyards all over western Pennsylvania to find materials for her artwork. The 40 by 8 foot installation in Carr Hall – which Loney says could be interpreted in a number of ways, including as ripples in a pond or the orbit of planets – includes wood-grained aluminum from a swimming pool, rusted steel handsaws, roofing copper, and corrugated heat exchange plates from an industrial heating system, as well as art glass crafted by Heather Joy Puskarich. In addition to the other recycled materials, Loney incorporated into the installation copper pipes salvaged from the renovation of Carr Hall.

The Cook Center also includes a teaching kitchen. Plans are to create a garden outside Carr Hall next spring to grow vegetables that will be sold to Parkhurst Dining Services to use in meals in the college’s dining rooms.

In advance of the renovations to Carr Hall, architects worked with the college community to create a design that would not only be energy efficient and showcase sustainability initiatives but that would result in classroom and lab spaces that would optimize how members of the department, both faculty and students, engage with their research and with each other.

In 2011 Allegheny College was among only seven colleges and universities nationwide to join the Better Buildings Challenge that Maria Vargas directs for the Department of Energy. Participants in the challenge, including more than 50 CEOs, mayors and labor leaders, committed to invest nearly $2 billion of private capital into energy efficiency projects and to upgrade energy performance by a minimum of 20 percent by 2020.

Carr Hall, which was built in 1964 and which also houses the college’s Department of Physics, was the focus of the Better Buildings Challenge program at Allegheny.

A widely acknowledged leader in sustainability, Allegheny College has committed to achieving climate neutrality by the year 2020. Through the Better Buildings Challenge, Allegheny will reduce energy consumption 20 percent by 2020 in 1.3 million square feet of building space across their campus.

Richard J. Cook was president of Allegheny College from 1996 to 2008. He was one of the early signatories of the now 660-member American College and University Presidents Climate Commitment (ACUPCC)—a national challenge to colleges and universities to develop a comprehensive action plan to reduce greenhouse gases by becoming more energy- and materials-efficient—and he served on the ACUPCC’s steering committee.

Through his foresight, Allegheny was selected as one of 11 ACUPCC signatories to launch pilot projects to further green their campuses—and was the first college or university in the nation to submit a request for proposal from energy service companies under the program.

Other milestones in his efforts include his appointment of a Task Force on Environmental Responsibility, development of a set of environmental guiding principles that shape the college’s approach to environmental stewardship, installation of an advanced composting facility and a commitment to “green,” energy-efficient building, such as the North Village residential complex.

Cook’s leadership role in environmental issues on college campuses was a natural outgrowth of his own background. He began his academic life as a chemistry professor whose specialty was the intersection of science and public policy. Following work related to the Love Canal hazardous waste depository at Niagara Falls (NY), Cook held gubernatorial appointments to the Michigan Toxic Substance Control Commission and later to the Governor’s Environmental Science Board.

More recently, he was an inaugural 2009-2010 Senior Fellow of Second Nature, a nonprofit designed to help create a sustainable society by transforming higher education.

Cook is a principal of Lahti Search Consultants, a nationally recognized search consulting firm focused on finding highly qualified professionals for enrollment-related positions at colleges and universities throughout the United States.