As published by NCAA.org

Allegheny backstroke specialist Joan Lange made big waves in 1976 when she became one of the first two women to win an NCAA Postgraduate Scholarship – as a captain of the Gator men’s swim team, six years before the Association began sponsoring competition for women.

She and SMU diver Christine Loock each received a $1,500 scholarship, joining 862 men who had been honored in the then 12-year-old program.

Lange put the funds to good use, graduating with honors from the Dartmouth School of Medicine in 1979, and she eventually became a prominent consultant to companies and international travelers on threats posed around the world by outbreaks of diseases.

But Lange made her first splash athletically, when she capped her freshman year with a sixth-place finish in the 100-yard backstroke at the Presidents’ Athletic Conference championships – making her the first woman to score at the meet.

A year later, Allegheny began sponsoring a women’s swim team, but Lange opted to continue competing with the men. Through her career, she collected 14 first-place finishes in dual meets and placed in the PAC – the league in which the current North Coast Athletic Conference school competed at the time – all four seasons.

Alongside those athletics honors, she maintained a near-perfect grade-point average at Allegheny and was active in campus activities, including serving as Panhellenic vice president. Her classmates took notice, electing her homecoming queen. She was escorted at her coronation by teammate Marty Pfinsgraff, a Division III all-American swimmer and her future husband. 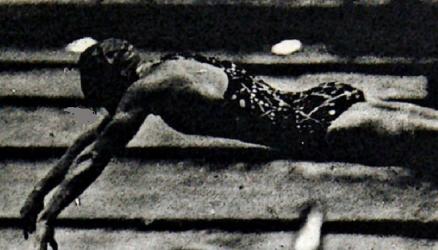 For the past five years, she has served as an independent medical consultant, describing herself in a biography as interested in “bringing innovative therapies to patients who have serious health problems and few therapeutic options.” She previously was director of health intelligence for iJet, where she helped clients cope with such travel health risks as SARS, avian influenza and H1N1 pandemic influenza.

The Pfinsgraffs remain prominent at their alma mater, supporting participation by Allegheny students in science internships.

Joan Pfinsgraff also remains active athletically at age 60, participating in U.S. Masters Swimming as a member of the Terrapin Masters Club. She swept backstroke events for her age group in March at the Carol Chidester Memorial Swim Meet in Maryland and again in April at the Colonies Zone Championships in Virginia.

Today, 87 women annually receive NCAA Postgraduate Scholarships, along with 87 men. The program seeks to identify “individuals whose dedication and effort are reflective of those characteristics necessary to succeed and thrive through postgraduate study in an accredited graduate degree program.”

There isn’t much doubt – after a career in intercollegiate athletics that remains noteworthy four decades later, as well as academic success and professional achievement – that the first woman scholarship recipient in Division III lived up to expectations.