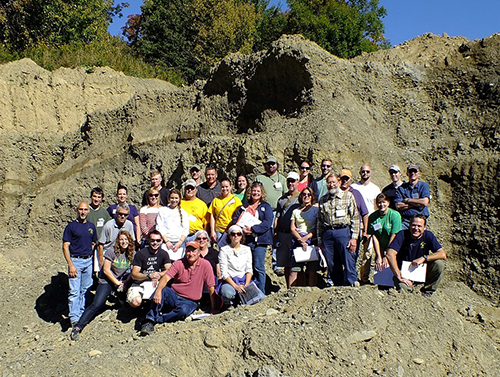 In addition to pursuing careers in geology – and the obvious fact that all three share last names that begin with the same letter – Castle, Carter and Cooney have served as the last three editors-in-chief of an internationally renowned environmental geosciences journal. Carter passed the torch to Cooney earlier this year.

“It’s pretty amazing to have three generations of Allegheny alumni serving as editors-in-chief of the same journal,” says Carter when referring to their roles for Environmental Geosciences, a publication of the American Association of Petroleum Geologists. “The journal has been around for about 20 years, and Michele is probably the youngest editor. I think it says a lot about Allegheny’s geology program.”

The three alumni met on campus during the Allegheny Geology Alumni Symposium held Sept. 26 and 27. The symposium included alumni presentations, meetings and mentoring opportunities for alumni and geology students, a field trip and time for socialization.

According to Ron Cole, geology professor and department chair, he and Roger Willis ’80, a geology major, developed the symposium two years ago as a way for alumni to connect with each other and the department.

“For the past two decades, we have had alumni returning to campus for guest lectures and our geoscience career events, and we consistently hear that they enjoy returning to campus and would like to stay connected,” Cole says. “I credit Roger Willis with the concept of the alumni symposium, providing a balance of professional and social activities. The first symposium in 2013 was a huge success, with more than 40 alumni returning to campus and even more attending in 2014. We’ll have the next symposium in fall 2015 in honor of the Bicentennial, and thereafter we envision having it every other year.”

Another reason Cole and Willis developed the symposium was to foster student-alumni connections – and Carter and Cooney serve as a primary example. Carter, assistant state geologist with the Pennsylvania Geological Survey, first met Cooney when she came back to campus in 2009 to recruit student interns for her organization and to speak about the geology field.

“I like hiring Allegheny interns, they’ve always been reliable and are able to think outside the box,” says Carter, who double-majored in geology and environmental science at Allegheny.

After their first meeting, Carter and Cooney kept in touch, and Cooney was eventually hired as an intern at the Pennsylvania Geological Survey in 2010, the summer after her sophomore year. She was then invited back for a second summer and continued on through part of her senior year.

“My internships actually led into my junior year thesis comp-planning process. Kris gave me the idea to do something on the Utica shale, which was a project the Pennsylvania Geological Survey was researching at the time,” says Cooney, who majored in geology and minored in writing.

“So while I was doing my internship, I also was doing my comp presentation planning. In fact, every Friday I would leave Allegheny and drive down to Pittsburgh to work on research and data as part of my internship and my comp,” she adds. “I was fortunate that I had the unique opportunity to combine my internship and comp experience. Kris even served on the committee of advisers for my senior comp.”

Following Cooney’s graduation, she completed a summer internship at a different organization in Pittsburgh. She then returned to the Pennsylvania Geological Survey as a geologic contractor.

“Kris has been my mentor going on five years now. She’s a great leader,” Cooney says. “She’s also opened many doors for me, including the role as editor-in-chief for Environmental Geosciences and through an organization called the Women’s Energy Network.”

“I love making trips back to Allegheny so I can meet and mentor students like Michele,” Carter adds. “I also like coming back for this symposium because I get to see people like Jim Castle, who is a geology professor at Clemson University and one of my mentors. It really comes full circle.”

Being back on campus brings back memories – especially about Alden Hall – for Carter and Cooney. Looking back on her experience, Cooney says she believes Allegheny prepared her well.

“Allegheny gave me tools such as how to be an independent researcher and worker,” she says. “The amount of research I did at Allegheny also prepared me well for graduate school. I had so many opportunities to do research and then apply that research to the workforce. Those experiences have been invaluable for me as a recent Allegheny graduate.”