From Junk to Funk

Lying on the table were a few pieces of cardboard, some wrinkled aluminum foil and about 30 never-before-played CDs. Oh, and don’t forget the large bag overflowing with old microfilm.

Some would see this and search for the nearest trashcan. But not Jared Balik, Emily Herwerden and Rose Fischer. These students look at what most consider trash and instead see treasure.

The students are using these items and more to create costumes for Allegheny’s sixth annual Trashion Show, an annual fashion-style show that encourages groups and individuals to create funky outfits using only recycled material that would otherwise go in the recycle bin or trash. The show will take place Sunday, March 29, at 4 p.m. in the Campus Center Lobby.

This year’s event, called “Junk Jungle,” is hosted by Students for Environmental Action (SEA), a group whose goal is to work for a positive change, creating a healthier environment and more sustainable planet and way of life. 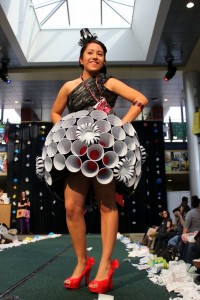 According to junior Jared Balik, SEA co-president, the idea for the Trashion Show is to promote waste awareness and recycling/reuse. Some examples of materials used for costumes in the past include egg and milk cartons, newspaper, plastic bottles, solo cups, flour bags and 35-mm film.

“We try to use the event as an educational opportunity to raise awareness about waste minimization efforts,” says Balik, who is a double major in biology and environmental science. “I think participants walk away with an enhanced appreciation for what creativity can accomplish in terms of repurposing ‘junk.’”

Each year, the show averages 10 to 12 entries. A panel of judges including administrators and students chooses winners based on categories such as “best outfit” or “most wearable outfit.” Assistant Professor of English Matthew Ferrence serves as emcee.

“The Trashion Show is a chance for students to show their creativity,” says senior Emily Herwerden, SEA treasurer who is a double major in environmental studies and German. “This is my first time creating an outfit for the show. I’m really excited to be involved this year.”

Herwerden says she plans to use CDs that were donated from the College’s radio station, WARC 90.3, to make a dress for the show. “I plan to flip the CDs silver-side out and use them on the skirt,” she says. “We also received the donation of old microfilm from the library, so I plan to use that as the bodice.” 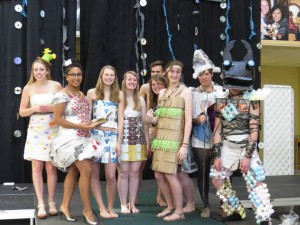 Planning for the annual event doesn’t happen overnight. Balik says it requires a “daunting amount of planning and a bunch of student-led committees,” with the group setting up the Campus Center lobby and stages, coordinating lights and sound, advertising and promoting the event, designing decorations and recruiting individuals to create outfits.

Freshman Rose Fischer, who plans to major in environmental science, serves as an SEA member and is on the decoration committee for this year’s Trashion Show. She says the group already has brainstormed ideas to make sure the stage fits in with this year’s “Junk Jungle” theme.

“We’re planning to use potato chip bags to make a sun and cardboard to make animals like monkeys, jaguars and toucans,” she says. “We also hope to make bugs out of bottle caps and packing peanuts, and we’re planning to spray-paint the microfilm green to make vines.

“I’m excited to see everyone’s creativity,” she adds. “We tend to think of trash as waste, but you can really repurpose it in a lot of amazing ways. Making fashion out of it is one way to do that.”

“The planning for the event can be stressful, but seeing it all happen is so satisfying, and everyone has such a great time,” Balik adds. “And if someone learns something, that’s even better. Somehow it always comes together, and it’s beautiful.

“I think the Trashion Show is unique in that it brings a kind of creativity to campus that I’ve never seen elsewhere,” he adds. “It brings people together, and it gets people pumped about environmentalism.”