The day began with the first student walking into a classroom saying: “Yes! I love science! I want to be a scientist!”

It’s safe to say that March 17 was a good day for that student and many of his classmates.

This student, along with fourth-graders from all five Crawford Central elementary schools, got the chance to gain hands-on experience with a variety of science topics during the Fourth Graders as Scientists event, held on Allegheny’s campus March 17, 19 and 20. This is the third year for the event, which is held in conjunction with the Crawford Central School District and Partners in Education. 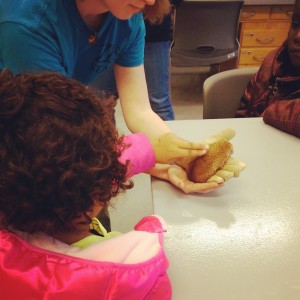 Allegheny professors, staff and students, as well as volunteers from outside the College, presented various science workshops to the fourth-graders. Topics ranged from agriculture and seeds, astronomy, circuits and electricity, and the water cycle to forces and friction, the rock cycle, animal adaptations, recycling, aquatic invertebrates and ecosystems, and bird migration and habitats.

“The program allows students to be exposed to a wide variety of science-related lessons in a setting outside the classroom,” said Lisa Whitenack, assistant professor of biology. “The topics that we cover are also covered by the science Pennsylvania System of School Assessment (PSSAs), so this event compliments the hard work that teachers are doing to prepare students for those exams.”

“The kids are loving this!” added Julie Sloat, a fourth-grade teacher at West End Elementary School. “They like being able to experiment with lots of hands-on activities.”

On the first day of the event, Kerstin Martin, Allegheny garden manager, presented a workshop about where foods come from. During her talk, students completed a food passport activity. “I think it’s important to get children thinking more about their food and its origin,” she said.

At the same time in another classroom, students learned about aquatic macroinvertebrates (“water critters”). 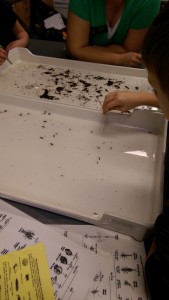 “They had the opportunity to study the creatures that live in the stream to determine if the stream is healthy or not,” said Wendy Kedzierski, director of Creek Connections, a partnership between the College and K-12 schools that focuses on hands-on watershed education. “They learned that this is what scientists really do and get paid for, and that this is a career they could have in the future if they keep going to school.”

“This is fun!” added Dylan Garza, a fourth-grader from West End Elementary, as he used tweezers to search for macroinvertebrates in a small pool of water with his classmates. “Today we learned about constellations, energy and power, food and now insects.”

Throughout the jam-packed week, volunteers said they enjoyed seeing the look on the students’ faces as they participated in each session.

“These hands-on activities really bring science alive for them,” Kedzierski said. “We want to keep that momentum going.”