No, we’re not talking about fish. We’re talking about the College’s Gator Social Venture Challenge, a competition that allows student entrepreneurs to pitch ideas for a new social venture or an improvement of an existing social venture to a panel of judges. The event took place April 24 and 25 in Quigley Hall.

This year, 26 teams from Allegheny and Grove City College participated in the two-day challenge, which is part of the managerial track programming in the College’s Department of Economics.

“The challenge is designed to provide community-based experiential learning opportunities, envisioned by the Allegheny Gateway, for students. They also present their ideas to highly successful professionals in their respective fields,” says Chris Allison ’83, entrepreneur in residence at Allegheny. “It also offers students networking opportunities with distinguished Allegheny alumni and friends of the College.”

TJ Eatmon, assistant professor of environmental science, worked with some of the teams presenting their ideas this year. The challenge is the final project for his “Ecopreneurship” class, where students were charged with creating a product that has an environmental impact. For example, one group from his class presented their idea of turning empty prescription bottles into lawn supply products such as shovels and rakes.

“I think the challenge shows that environmental ideas and business can coexist,” Eatmon says. “It gives the students great experience in designing their own business plan. Their liberal arts education also gives them an advantage by allowing them to think and communicate with people across a variety of professions.”

Eatmon adds that a partnership between Allegheny and Parkhurst Dining – Allegheny’s food service provider – was actually the winning idea in 2012. The business plan now has been put into action; Allegheny sells fish and lettuce from its aquaponics system – which uses fish waste to grow plants in a recirculating system – directly to Parkhurst.

For this year’s challenge, preliminary round judging took place on April 24, with all teams pitching their ideas to the judges. Nine student team finalists advanced to Saturday’s championship round. 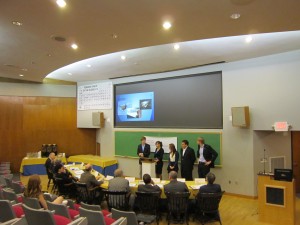 The group’s idea was to take advantage of an impending supply chain problem in the production of LAL, which is the finest indicator of sterility in the biomedical industry and is required for testing of the majority of medical equipment. According to the group, since LAL is produced from the blood of horseshoe crabs, the collection of horseshoe crabs in the wild is about to be increasingly regulated. The group’s idea was to develop a sustainable method of farm-raising horseshoe crabs to protect their species and produce LAL in a reliable manner.

Second place and $750 in prize money were awarded to the Kinbox team from Grove City: Andrea Howe, Jordan Jensen and Karolina Lagerquist.

Third place and $500 in prize money were awarded to the Lunch Time team from Grove City: Ashley Henderson, Haley Nerlich and Taylor Stein.

In addition, an honorable mention and $300 in prize money were awarded to the Wheel House team from Grove City: Elisabeth O’Brien and Hannah Vaccaro.

For the improvement of an existing social venture, first place and $1,000 in prize money were awarded to the Market House Authority team from Allegheny: Ryan Cambier, Robert Pickett and Matt Tilley. The group proposed an innovative solution to develop new marketing strategies to help improve the business’s operations and preserve the historic Market House building, a long-standing Meadville icon.

Second place and $750 in prize money were awarded to the Community Care Network team from Allegheny: Andrew Hotchkiss, Liam McNamee and Mary Nagel.

Third place and $500 in prize money were awarded to the Special Olympics of Crawford County team from Allegheny: Lucas Morton, Hannah Russell and Walter Stover.

This year’s judges were: