Allegheny Students Design T-shirts for a Cause

What started as an artistic endeavor developed into a lesson in business and marketing — and ended with more than $2,600 in donations to four local nonprofits.

Over the course of two days, 20 Allegheny College students in Assistant Professor of Art Steve Prince’s Introduction to Studio Art class raised $2,615 for Active Aging Inc., Women’s Services Inc., the Center for Family Services Inc. and Bethesda Children’s Home through the sale of T-shirts the students designed and printed. The money will be split equally among the four agencies.

“It’s refreshing in that this is a group of young people who thought of seniors. … It renews my faith that the younger generation isn’t forgetting” about senior citizens, Geer said.

The assignment was meant to introduce students to the basics of design and screenprinting in a way that benefited the Meadville community. But the project went further: Working in teams, students met with representatives of the four agencies to better understand their missions. The Allegheny teams developed business plans, considered how many shirts to order and in what sizes, and debated price points and how best to market the shirts.

The last day of the sale found sophomore Derek Sawer of Edinboro hawking his team’s shirts from a table carefully designed to attract eyeballs — and dollars for the Center for Family Services. The team’s T-shirts featured a logo of an entwined family of three in the shape of a tree.

“That’s what Center for Family Services does,” Sawer said. “They (give families) the ability to make roots … those essential things that are the foundation for success.” 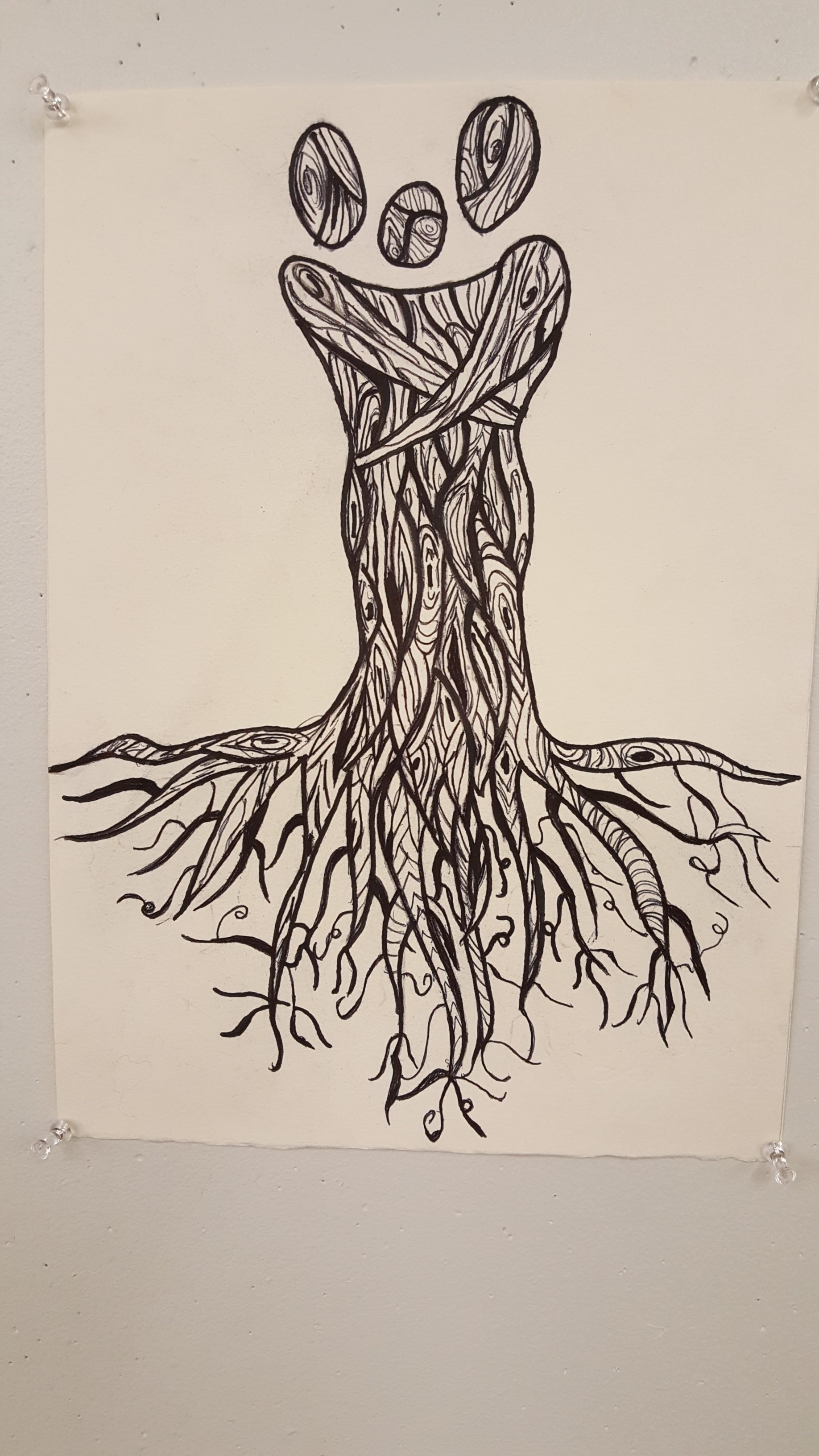 Passersby were invited to sign leaves made from construction paper and pin the leaves to a cutout of a tree near the table. The group also launched a campaign on a crowdfunding site to raise money.

“I really learned a lot from this class about executing an idea,” Sawer said. 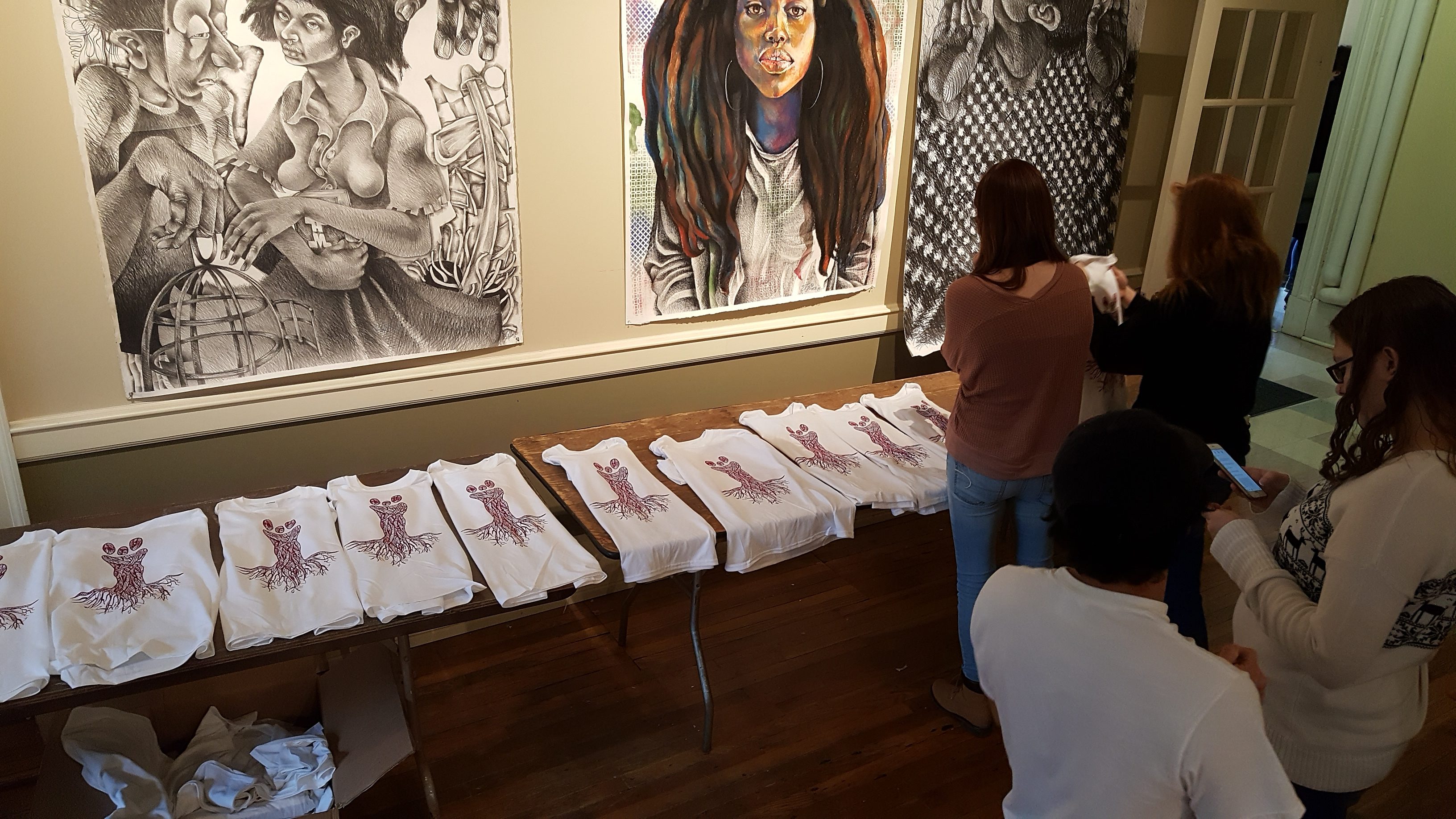 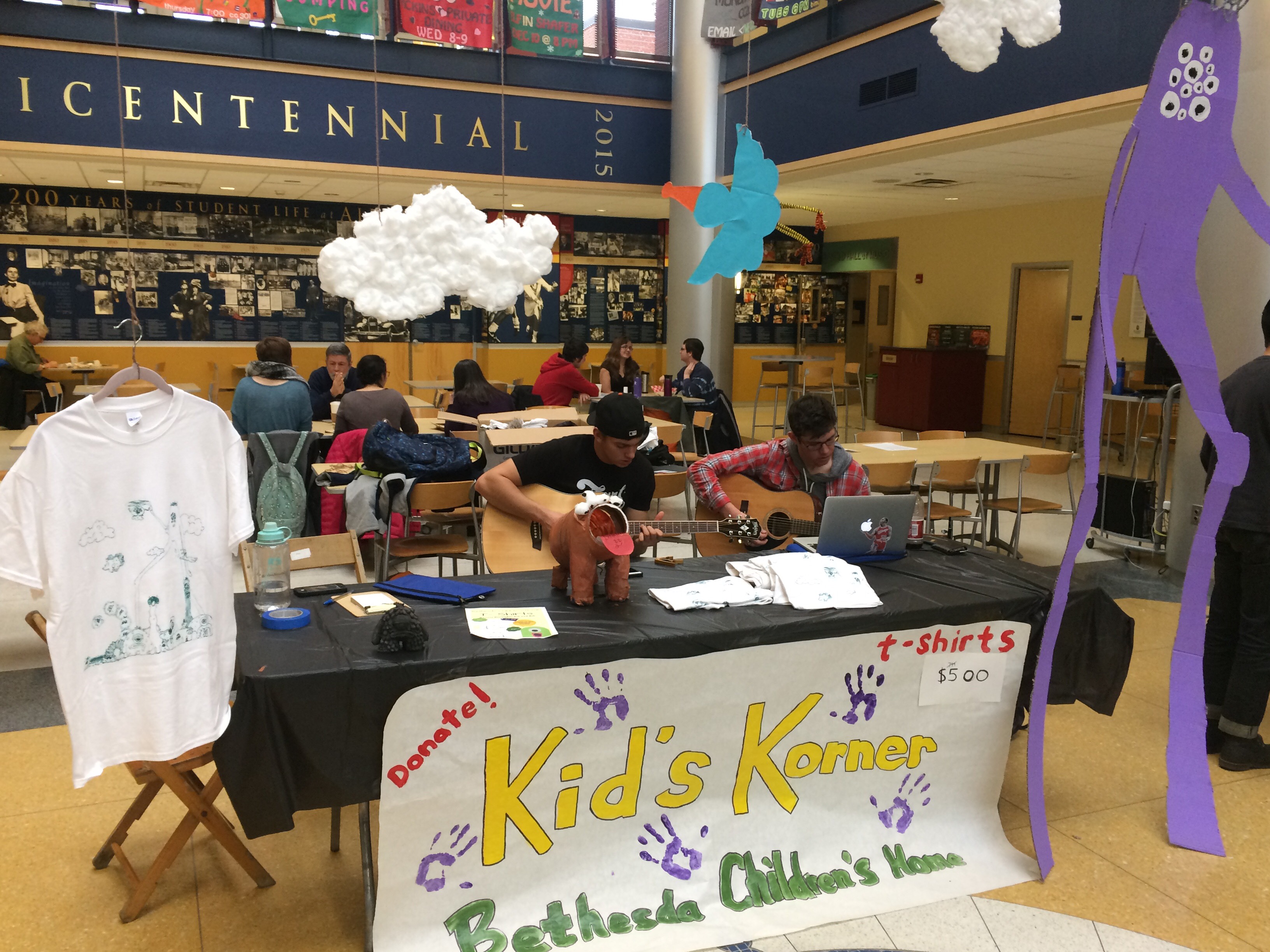 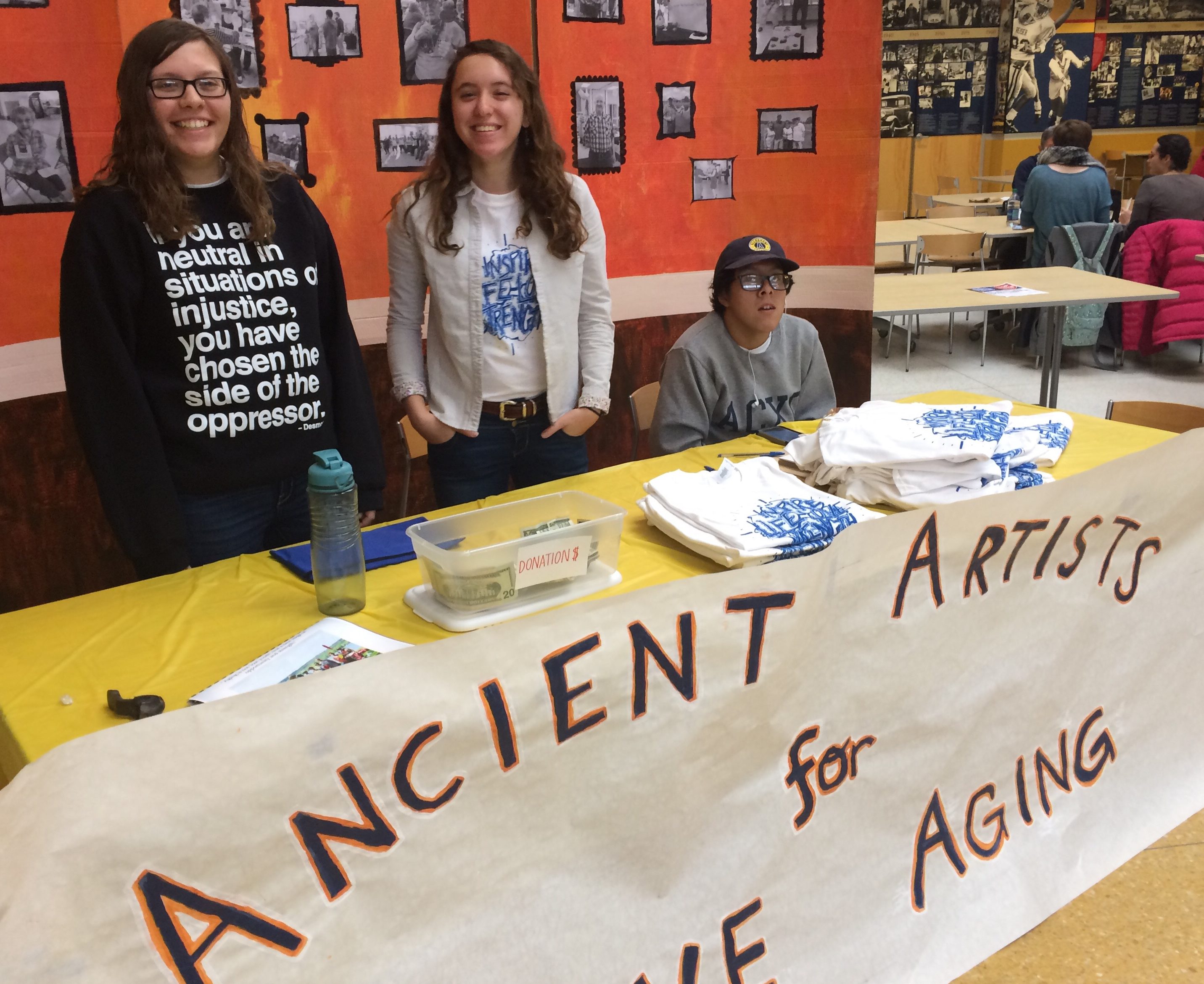 Much of Prince’s work centers on community engagement. He is the designer and coordinator of The Big Zipper, a community art project constructed from wooden puzzle pieces carved by Meadville residents.

“Right from the beginning I wanted to do a project that went beyond the self,” Prince said of the T-shirt assignment. “How do we make students understand that they’re planted in Meadville for four years and understand the community context that they’re living in? Wherever you’re planted, you need to be active in that community.”

It’s a lesson that will stay with Rachel Crookston, a first-year student who plans to major in psychology and neuroscience and minor in art. She and her teammates raised money for Women’s Services; their T-shirts featured a purple design patterned on a phoenix and a butterfly: symbols of rebirth. 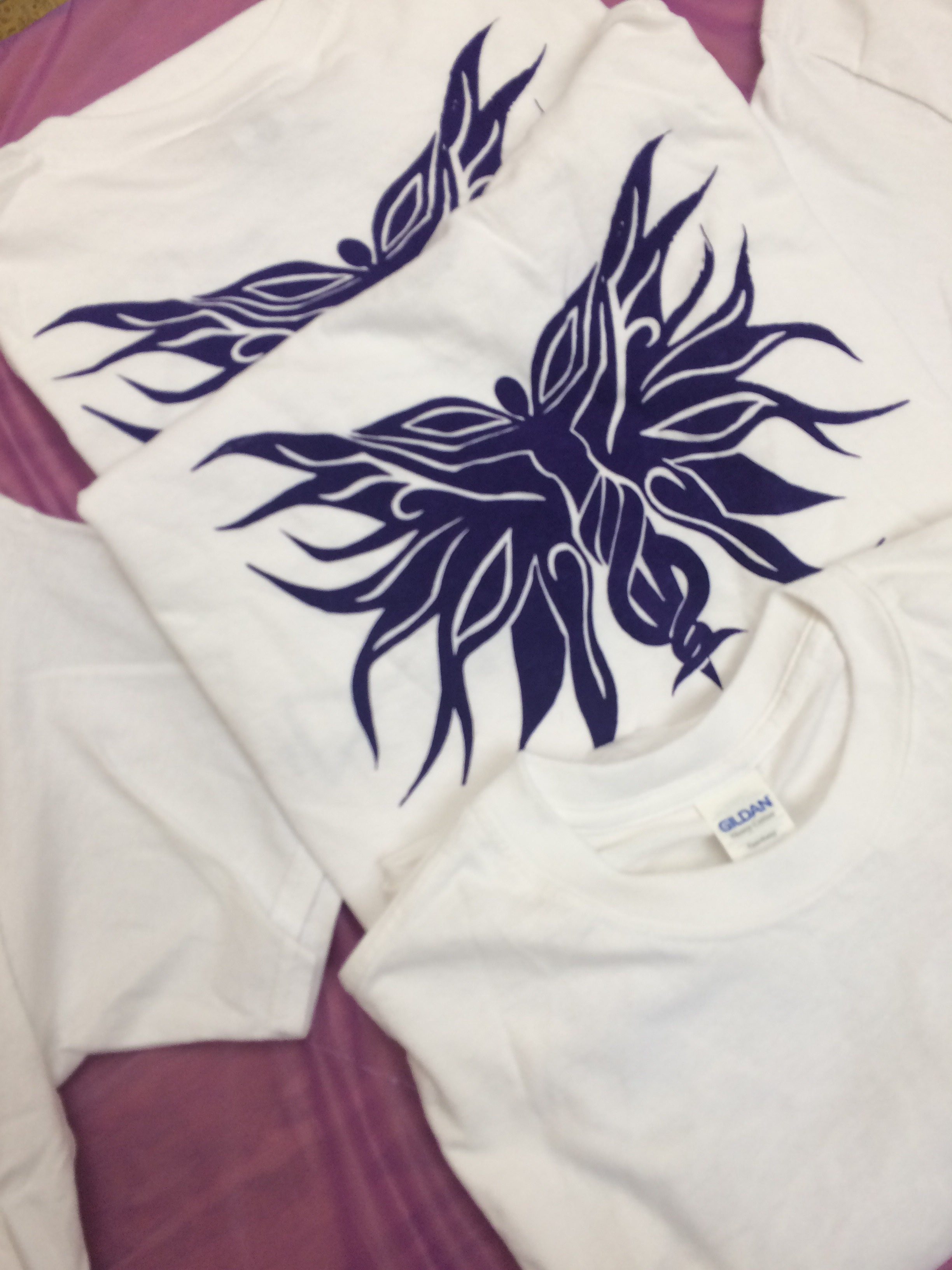 The project allowed Crookston to combine her favorite things: art, advocacy and charity. She said she once served on a forum for abuse victims in her hometown of Valparaiso, Ind., and plans to become an art therapist.

“I know what art can do for people,” she said and smiled. 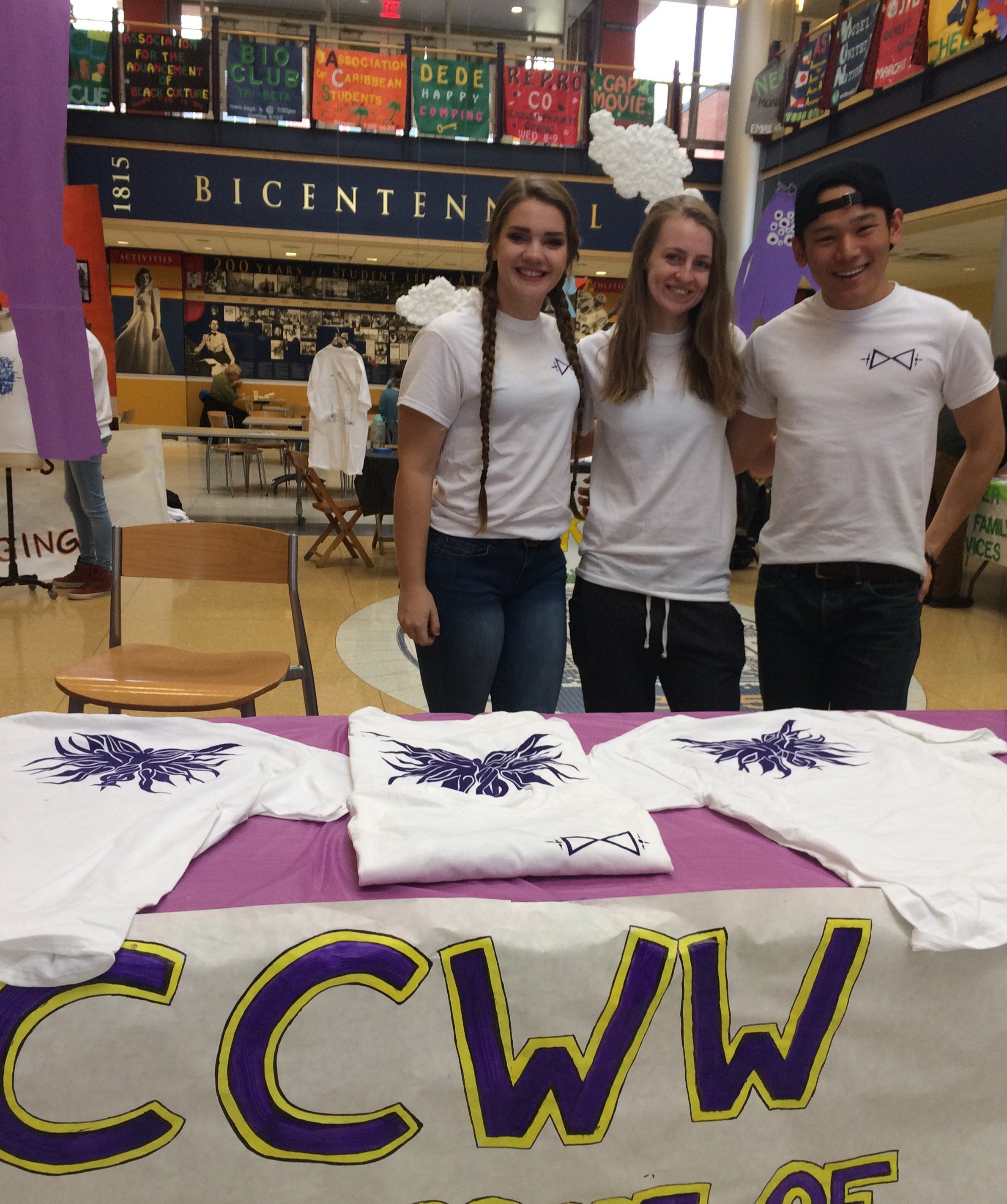