“It’s amazing to see,” said Taylor Cook, 18, a first-year student from Mt. Orab, Ohio, who is planning to major in art and technology.

But that didn’t matter to the roughly 100 students, faculty and staff who gathered on the lawn outside Allegheny’s Newton Observatory. Looking through special eclipse glasses, pinhole cameras and telescopes, they were treated to a partial eclipse that blocked out about 77 percent of the sun.

The group included Allegheny President James H. Mullen, Jr., Provost and Dean of the College Ron Cole and more than 40 students involved in the Access Allegheny Scholars Program, a program designed to improve the first-year college experience of traditionally underrepresented or underserved students, including, but not limited to, first-generation college students and students who come to Allegheny from a great distance.

“It’s a great initial experience for them, being a part of a national experience while here at Allegheny,” said Rachel O’Brien, associate professor of geology and dance studies. 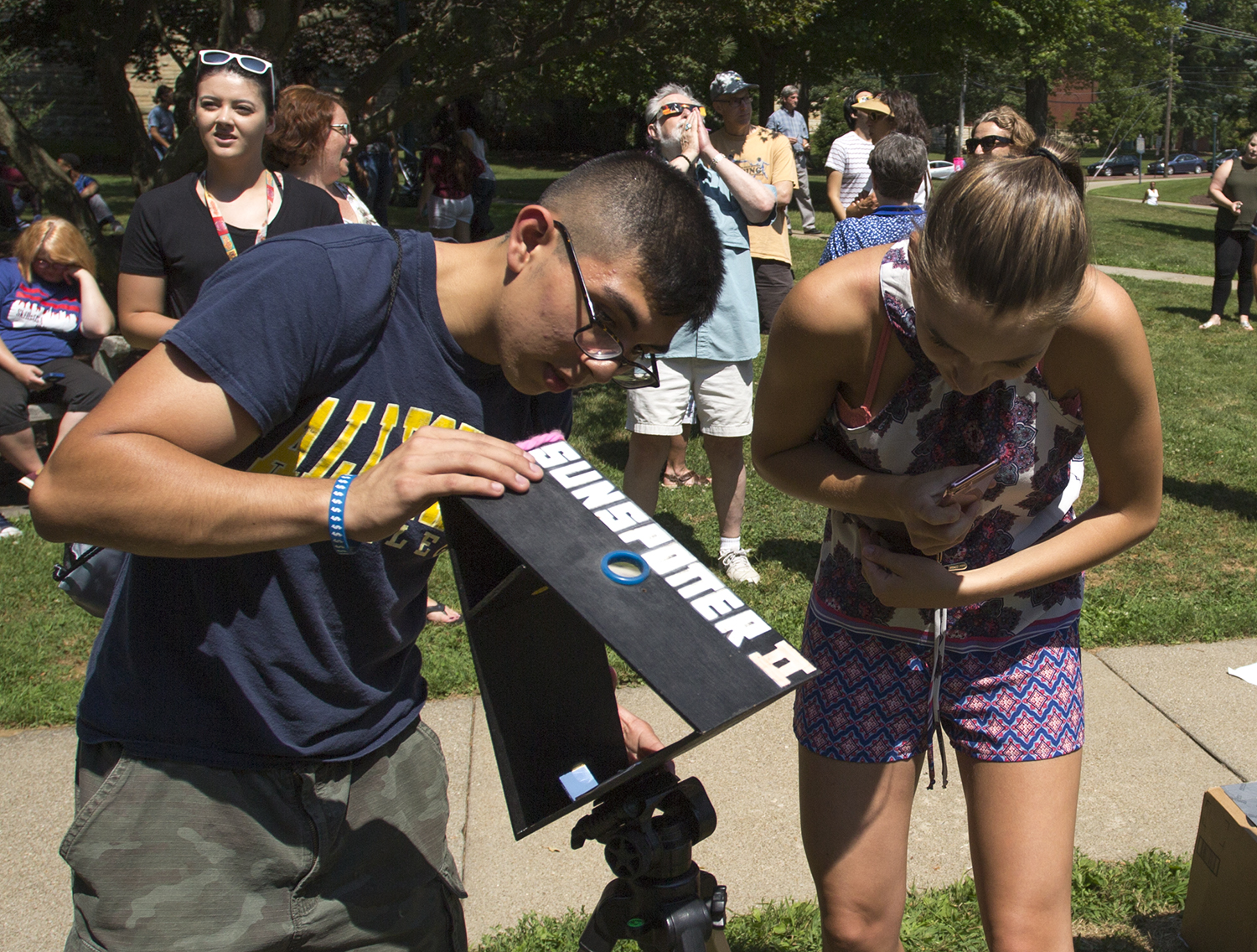 Outside on the lawn, students passed around glasses and gathered around a Sunspotter, a special telescope that projects an image of the eclipse onto white paper for safe viewing. Inside the observatory, Associate Professor of Physics Jamie Lombardi gave visitors a quick tutorial on the workings of its 9.5-inch refracting telescope. The telescope is more than 100 years old and is outfitted with a mirror on the end that blocks almost all of the sun’s light.

“That’s crucially important,” Lombardi said. “If it didn’t have that, you could literally blind yourself.”

The eclipse is the kind of special event that can help ignite a person’s interest in science, Lombardi said.

“People have been interested in this kind of thing for hundreds, thousands of years,” he said. “Everyone, regardless of age, has a connection to the universe and a curiosity about the universe.”

Sean O’Gary, a 19-year-old first-year student who plans to major in physics, is from Chattanooga, Tennessee, inside the path of totality. He was disappointed not to see the full blackout, but still impressed by the partial eclipse and the chance to view it through the Newton Observatory telescope.

The eclipse puts our presence in the universe in perspective, O’Gary said.

“We’re just tiny people and we’re privileged to be able to think about what’s going on and understand it,” he said.

Miss the eclipse? Not to worry. Northwestern Pennsylvania will be in the path of totality for the next total solar eclipse in the United States, in April 2024.