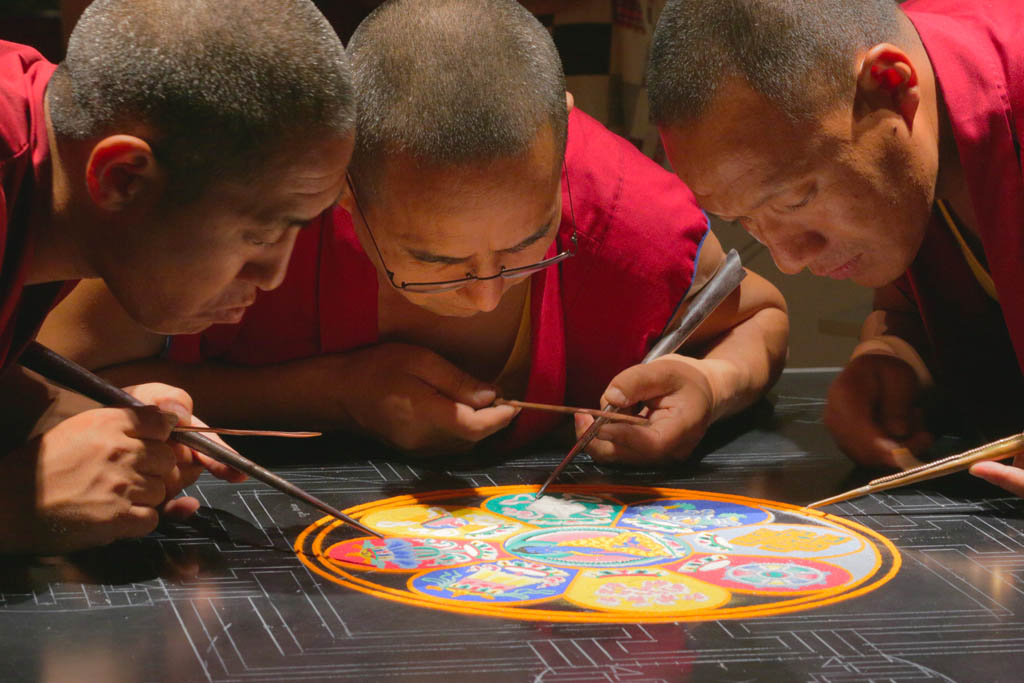 This event is funded by the Harry C. Winslow and Madeleine King Winslow Ecumenical Fund.

From all the artistic traditions of Tantric Buddhism, that of painting with colored sand ranks as one of the most unique and exquisite. In Tibetan this art is called dul-tson-kyil-khor, which literally means “mandala of colored powders.” Millions of grains of sand are painstakingly laid into place on a flat platform over a period of days or weeks. Formed of a traditional prescribed iconography that includes geometric shapes and a multitude of ancient spiritual symbols, the sand-painted mandala is used as a tool for re-consecrating the earth and its inhabitants.

Traditionally most sand mandalas are deconstructed shortly after their completion. This is done as a metaphor of the impermanence of life. The sands are swept up and placed in an urn; to fulfill the function of healing, half is distributed to the audience at the closing ceremony, while the remainder is carried to a nearby body of water, where it is deposited. The waters then carry the healing blessing to the ocean, and from there it spreads throughout the world for planetary healing.

On previous US tours the lamas have displayed this sacred art in museums across the country, including the Arthur Sackler Gallery, Washington; Field Museum of Natural History, Chicago; Peabody Essex Museum, Salem; the Indianapolis Art Museum, Indianapolis; Kimbell Art Museum, Fort Worth, and The Provincial Museum of Alberta, Edmonton, Canada.

The lamas begin the work by drawing an outline of the mandala on the wooden platform, followed by the laying of the colored sands, which is effected by pouring the sand from traditional metal funnels called chak-purs. Each monk holds a chak-pur in one hand, while running a metal rod on its grated surface; the vibration causes the sands to flow like liquid.

The Mystical Arts of Tibet is a world tour endorsed by His Holiness the Dalai Lama to promote world peace and healing by sharing Tibet’s rich and authentic sacred performing and visual arts with modern audiences. The tours offer a rare opportunity to witness one of the world’s most ancient sacred traditions presented by a group of monk artists for whom these traditions are a way of life.

From the first tour in 1988, the Mystical Arts of Tibet tours by the Drepung Loseling monks have enjoyed an overwhelming reception across North and South America, as well as in Europe. Due to the timeless nature of these Tibetan arts, and the spirit of universal values they inspire, the tours continue to capture the imagination of the West.

The artists are monks from Drepung Loseling Monastery, which has been re-established in exile in South India. The performers on The Mystical Arts of Tibet tour are not full-time professionals; rather they are genuine monks who are taking time off from their life-long devotion to contemplation and study to participate in the tour. These monk artists consider it an honor to be selected to represent their monastery and share their cultural traditions on the tour, hoping that they will be able to make some small contribution toward world peace and toward greater awareness of the Tibetan situation. At the end of each tour the monks return to Drepung Loseling Monastery to continue their vocation.