2013 Prize for Civility in Public Life

“Allegheny College is honored to award its 2013 Prize for Civility in Public Life to Senator Dianne Feinstein and Senator Lindsey Graham,” said President Mullen. “Two proud partisans, who strive for civility in America’s most difficult political battlefields. And in doing so, challenge all of us to reflect more seriously about what civility really means.

“They have been true to their respective beliefs. They have shaped both the politics and the policy of their time. They have found joy in the give and take of the arena, while respecting the inherent dignity of the elected office and those who hold it.”

“The one thing about being civil is, it doesn’t mean you don’t have passion.”

“We have a big job on our hands to be able to restore civility.”

The civil senators, Feinstein and Graham

March 13, 2013 – It has been fascinating and instructive to listen to the reactions to this year’s winners of the Allegheny College Prize for Civility in Public Life. Sens. Dianne Feinstein of California and Lindsey Graham of South Carolina were honored last month with the 2013 prize at the National Press Club in Washington. Reaction to their selection has been widely positive. And universally civil. But some commentators have argued that one winner or the other was undeserving.

Such criticism reflects the hard work we still have to do if our political discourse is to become more civil.

Clearly, the long careers of Sens. Feinstein and Graham demonstrate a deep commitment to civility. That commitment, however, was but one of two reasons for their selection. The second reason is that they are proud partisans who strive for civility where it is most difficult to achieve, and where it is most dearly needed — on the most contentious political battlefields of our day. They have sought to practice civility on issues where our nation is deeply divided. In doing so, they challenge us all to reflect more seriously on what civility really means.

About the Allegheny College Prize for Civility in Public Life 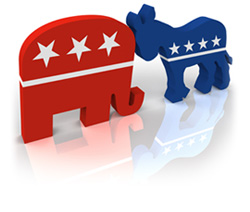 The issue of declining civility in American politics is clearly a serious one—as vexing a challenge to our democratic processes as we have seen in decades. In particular, we are convinced that the decline portends a reversal of hard-won progress we’ve seen in political participation among young voters.

With that concern in mind and seeking to honor the best traditions of the liberal arts, the college has adopted a special focus on civility in public discourse. In conjunction with numerous innovative programs and initiatives of the Center for Political Participation—a national center at Allegheny College that is dedicated to encouraging greater political involvement among young people by fostering an appreciation for the vital link between an engaged, active citizenry and a healthy democracy—the college is establishing the Allegheny College Prize for Civility in Public Life.

As Allegheny prepares to celebrate its bicentennial in 2015, a moment that coincides with the sesquicentennial of the end of the Civil War, we can think of few contributions as valuable as those which strengthen the social fabric not only of our nation, but also of our increasingly complex, diverse and interconnected global community. In particular, we hope this award will inspire and challenge young citizens to act with insight, passion, ethical awareness and sensitivity on the complex challenges of their world.