2019 Allegheny College Prize for Civility in Public Life in Pennsylvania 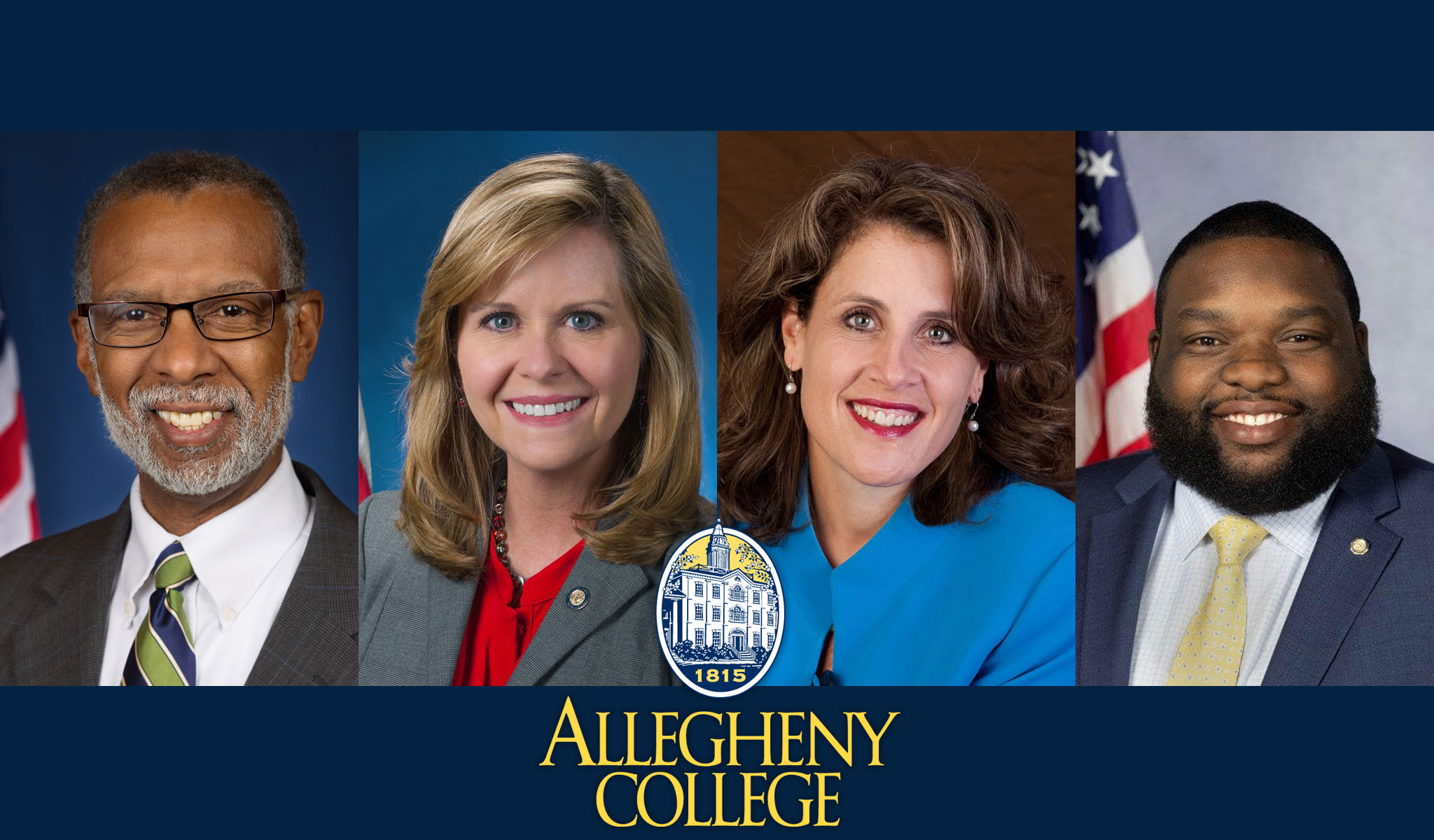 The four legislators were presented with the prize for their efforts to build bipartisan consensus on reforms to the state’s criminal justice system; with the ultimate goal of reducing recidivism and helping individuals who have learned from past mistakes re-enter into the workforce.

The presentation was made during the 35th Annual PA Chamber Dinner in Hershey – an annual gathering of 2,000 political, business and labor leaders from across the Commonwealth. September 23, 2019 (Harrisburg, PA) – At tonight’s 35th Annual Chamber Dinner, the Pennsylvania Chamber of Business and Industry was proud to partner with Allegheny College to present the third annual “Allegheny College Prize for Civility in Public Life in Pennsylvania” award to the four chairs of the General Assembly’s Criminal Justice Reform Caucus – Senators Camera Bartolotta, R- Greene, and Art Haywood, D-Philadelphia, and Representatives Sheryl Delozier, R-Cumberland, and Jordan Harris, D-Philadelphia. The four legislators were presented with the prize for their efforts to build bipartisan consensus on reforms to the state’s criminal justice system; with the ultimate goal of reducing recidivism and helping individuals who have learned from past mistakes re-enter into the workforce.

“We’re honored to partner with Allegheny College for the third year in a row to incorporate the presentation of the Pennsylvania ‘Allegheny College Prize for Civility in Public Life’ into our Annual Dinner program,” said PA Chamber President and CEO Gene Barr. “In today’s divisive political environment, all too often bipartisanship is the rarity instead of the norm. But tonight’s honorees show that it is possible to work across party lines to find common ground and move important issues forward. As part of our overall workforce development efforts, the PA Chamber has worked closely with all four Criminal Justice Reform Caucus chairs and we are proud to recognize their work tonight.”

Allegheny College, a 204-year-old national liberal arts college in Meadville, Crawford County, created its Prize for Civility in Public Life to honor public officials from both sides of the political spectrum who have conducted themselves with noteworthy civility. The Prize has been awarded nationally since 2012, and in Pennsylvania since 2017. Last year, former Republican U.S. Rep. Charlie Dent and Democratic state Auditor General Eugene DePasquale received the state prize.

“The four chairs of the General Assembly’s Criminal Justice Reform caucus represent districts from one end of the state to the other, districts that powerfully reflect Pennsylvania’s rich diversity,” said Dr. Hilary Link, president of Allegheny College. “Too often, such differences preclude working together constructively. But our winners tonight show us that it need not be so. They have set differences aside to work together in good faith, to achieve common ground where they can, in one of the most important public-policy issues of our time.”

Bartolotta, Haywood, Delozier and Harris founded the Criminal Justice Reform Caucus in January of 2019 to build on the success of the passage of the Clean Slate Act – a first of its kind law that will help former, non-violent offenders who have learned from their past mistakes get a second chance by automatically sealing criminal records that are 10 years old or older. The caucus aims to advance policies that address issues such as barriers to employment in the occupational licensure system; education and workforce skills during incarceration; probation and parole issues; and programs focused on successful rehabilitation and re-entry into society.

“In an era of divided government and deep partisan disagreements, civility has never been more important in public life. We all have similar goals; we just need to work together to achieve them,” Senator Camera Bartolotta said. “I appreciate Allegheny College not only for recognizing the ongoing efforts on both sides of the aisle to improve the criminal justice system, but also for continuing to honor the leaders who are committed to working together without being divided by party affiliation or ideology.”

“Thank you to Allegheny College for recognizing us with this honor at the PA Chamber dinner,” said Representative Sheryl Delozier. “We are doing great things to reform the criminal justice system in Pennsylvania. I appreciate being recognized for my willingness to work across the aisle in what are widely considered to be polarized times politically. My door is always open to my constituents and colleagues.”

“It’s incredibly humbling to receive an award that has been given to such great figures in American politics as Vice President Joe Biden and Sen. John McCain, Congressmen Beto O’Rourke and Will Hurd, Sens. Dianne Feinstein and Lindsay Graham, the Women of the United States Senate, and Supreme Court Justices Ruth Bader Ginsburg and Antonin Scalia,” Representative Jordan Harris said. “Civility in politics is essential to ensuring that we are able to accomplish our goals and properly represent those who elect us to serve. It’s possible to disagree without being disagreeable, and this ability to be civil helps us work together when we find common ground. Success found through bipartisanship can inspire other lawmakers to follow the same path and restore civility to our political process.”