Ahead of the Curve: Allegheny Infuses the Liberal Arts, Economics into Business Education 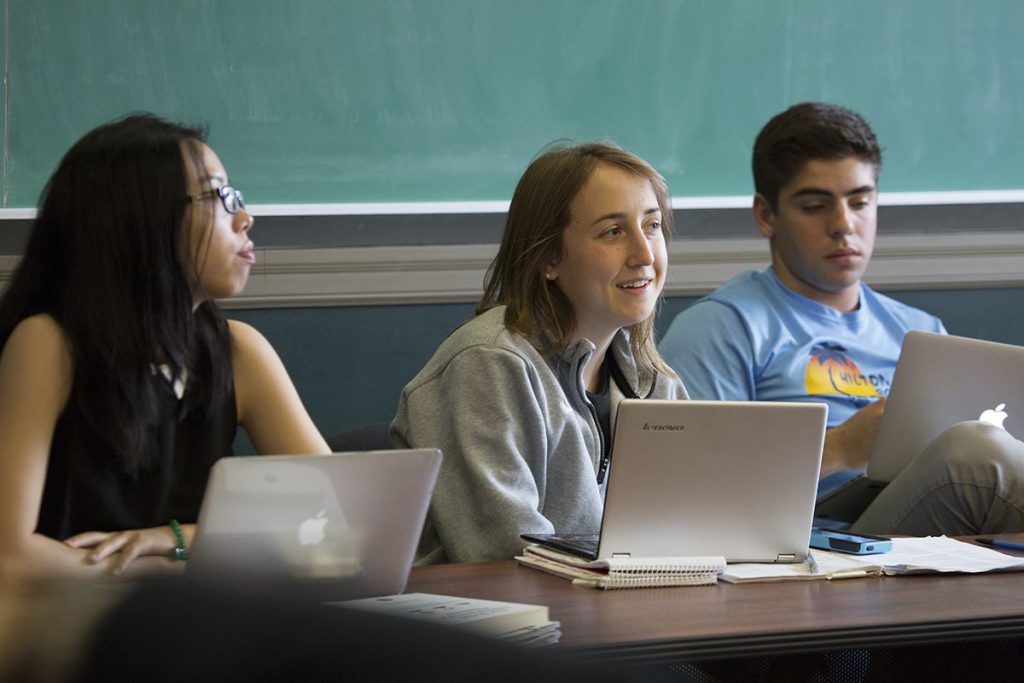 “It just had one of those atmospheres that make you want to work there,” Barrett, a senior, recalls.“You could just tell everyone was vibrant and striving to be their best.” The financial information services firm was one of four major corporations that Barrett and two dozen other Allegheny students visited on a two-day tour of New York City.

A few months later, back on the Allegheny campus, College Trustee Jennifer Daurora ’99 shared career insights with several dozen students while they munched on pizza in Quigley Hall.

“I love questions,” Daurora, director of operations for McGinnis Sisters Special Food Stores in Pittsburgh, said as she reached the end of her presentation. Daurora rewarded the first student to raise his hand with a coffee shop gift card.

Though separated by some 400 miles, Barrett’s trip and Daurora’s talk have a common thread. They’re part of a sustained effort to help prepare Allegheny students for careers in business — in particular through the business economics track in the College’s economics major and the Center for Business and Economics.

Why study business at Allegheny instead of a university with a traditional business administration program? That’s a question that high school students and families at admissions events often pose to Stephen Onyeiwu, Economics Department chair and Andrew Wells Robertson Professor of Economics.

Onyeiwu often frames his answer as “liberal arts-plus.” He explains that Allegheny students can take the courses they would find in business programs, such as finance, management, accounting, entrepreneurship, human resources and more. But they also gain the abilities that are hallmarks of a liberal arts education: writing and speaking well, thinking critically, integrating different areas of study in analyzing a problem, and contributing to the good of the community.

Like all Allegheny students, economics majors in the business economics track must also declare a minor (or a second major) in another field. That breadth encourages students to approach problems from multiple perspectives and also helps them become more marketable to employers, says Chris Allison ’83, Economics Department entrepreneur in residence and Center for Business and Economics co-director.

Senior Bethany Bauer is doing just that. A double major in economics and French, she became interested in globalization after an introductory course with Onyeiwu. Bauer also studied abroad for a semester in France during her junior year. While her courses there didn’t focus on business, she did observe differences between the retail sector in Europe and the United States, thanks to insight she gained through an internship with the Pittsburgh-based Giant Eagle supermarket
chain.

Bauer’s Senior Comprehensive Project — which includes a chapter written entirely in French — focuses on foreign aid to Haiti. It’s a topic she developed with the guidance of her advisor, Professor of Economics Tomas Nonnenmacher ’90.

“Without Professor Nonnenmacher’s help, I wouldn’t have even thought to look at a former French colony, to look at one of them through the lens of economics,” says Bauer, who is seeking a career in international business.

A Change in Name — But Not in Rigor

Bauer is among the 50 percent of Allegheny economics majors who pursue the business economics track. Until last fall, the program was known as the managerial economics track, which was established in
2002 through the leadership of Professor Emeritus of Economics Donald Goldstein.

Initially, naming the program something other than “business” served as a differentiator among other colleges, Onyeiwu explains. However, as increasing numbers of students expressed an interest in the field, the Economics Department and admissions office saw an opportunity.

“The change in name has allowed Allegheny to connect more directly with students interested in business and more effectively share the program’s longstanding strengths with them,” says Cornell LeSane II, vice president for enrollment and dean of admissions. “We have eliminated a barrier for students and families who might not have even considered Allegheny simply because they didn’t see ‘business’ on a list of our academic programs.”

The renaming hasn’t diminished Allegheny’s emphasis on situating the study of business in the broader context of economics, Allison says. It’s a rigorous curriculum that requires students to consider more than simply what makes a business successful. They also examine its place in the overall market and how economic principles and strategies influence a company’s day-to-day operations.

“Some people in business, I think, not only do they get the answers wrong, they don’t know the questions to ask,” Allison says. “Because we’ve got that really, really strong underpinning in economics, I think our students know how to ask not only ‘why,’ but ‘why not’” when studying an issue.”

The business economics track also complemented a recent initiative to create the College’s Center for Business and Economics (CBE). Part of the Allegheny Gateway, the CBE helps connect students of all majors with business-related learning opportunities outside of the classroom.

“It doesn’t stray away from that liberal arts foundation, but rather tries to build on those ideals such that our students are ahead of the curve when they are hired because of what they’re doing here,” says
Russell Ormiston, CBE co-director and assistant professor of economics.

Helping students find internships has become a key part of the CBE’s work in partnership with the Gateway. Students in the business economics track are required to complete an internship, and many complete more than one.

“I was able to learn so much and ended up falling in love with the profession and am pursuing it as a career opportunity,” says Barrett, a Spanish minor. “The internships are a great opportunity, and Allegheny alumni are the best way to go about getting one because they know how qualified you’re going to be.”

As Barrett discovered, students pursuing business careers gain access to a powerful network of Allegheny graduates. “The alumni engagement has been tremendous,” Ormiston says. “It’s wonderful as an educator to have those kinds of resources available.”

That connection translates into alumni executives like Daurora visiting campus to teach and advise students in the classroom, on panels and through one-on-one mentoring. In addition, Allegheny graduates are opening doors at their places of employment for students, including a biennial trip to visit firms in New York City.

Alumni involvement not only helps current students learn about careers and find internships, but it also supports graduates as they seek to advance in their careers. Those relationships often result in firms hiring several Allegheny graduates, Onyeiwu says.

“That is what often carries our students into that second or third job, when you have that network of alumni and former classmates,” he says. “Our students are very close — they learn collaboratively, they do things together, they work as a team. Then they use that teamwork to build a network when they graduate.”

Alumni also are providing generous financial support for business education at Allegheny. The members of the CBE Board of Visitors, an advisory group of executives, recently established an endowed fund to support internships. Additional resources, Ormiston says, expand the learning opportunities the CBE and the Gateway can offer to students.

Allison, who has taught at the College since 2006, notes that it’s especially gratifying when students he has mentored return to help current students. “That’s the best for me,” Allison says. “It’s really fun to watch them come back and see how they’ve developed into seasoned executives.”

This article appeared in the Spring 2017 issue of Allegheny magazine.