This year marks the two hundredth anniversary of our College’s founding. The Bicentennial affords us the opportunity to celebrate the tradition and values that have carried Allegheny across two centuries. As a centerpiece of that celebration, and in recognition that our institution’s legacy mirrors that of our nation, this year’s Allegheny College Prize for Civility in Public Life honors moments of extraordinary civility in American history.

We are highlighting moments when choosing the civil course required exceptional courage and created an important positive impact for our country.

We hope that these moments will remind us all that civility has played a profound role in our history.

Moreover, we hope that they will inspire young people to see the possibilities of public service and encourage today’s civic leaders to choose civility in their public interactions. 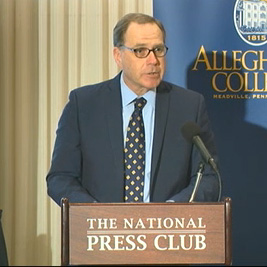 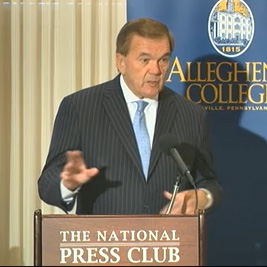 “The fact that the individual on the other side vehemently disagrees with you – that’s great, that’s democracy. He’s your foe, he’s not your enemy. Let’s bring civility back into this whole discussion. Let’s follow the lead of Allegheny College.”

“There are causes and issues that are bigger than any party.”

“Congressman Lewis, with great emotion, accepted” the badge, Mr. Mullen said. “I think that’s a moment of reconciliation that’s grounded in civility, and it gives us great hope.”

WASHINGTON, D.C. (May 4, 2015) – Mounting racial tensions in America set the stage for the winner of the 2015 Allegheny College Prize for Civility in Public Life.

Allegheny College President James H. Mullen, Jr. had previously announced that, in recognition of Allegheny’s 200th anniversary this year, the 2015 Civility Prize would be used to recognize the most important moment of civility in American history. Prominent historian Douglas Brinkley helped lead the effort and joined Mullen for today’s announcement.

The winning moment, announced by Mullen today at the National Press Club: former Montgomery (AL) Police Chief Kevin Murphy taking off his badge and giving it to Congressman John Lewis (D-GA), as an act of contrition for the police department’s treatment of Lewis in 1961.

“Historians could rightly say that other moments of civility were more important in American history,” said Mullen. “Perhaps that’s true. But I believe this is the moment America needs to reflect upon right now. Because it shows the incredible power of civility to bridge our racial divides. To foster reconciliation. And to give us all hope. And with America jarred so deeply by images from Ferguson, Cleveland, Staten Island, Brooklyn and now Baltimore, that is what we most dearly need.”

The other historic moments named 2015 Civility Prize finalists were:

Brinkley said that some of America’s most well regarded historians submitted nominations for this year’s prize, including Yale University’s David Blight; Doris Kearns Goodwin; David Levering-Lewis of NYU; and the Allegheny College history faculty. Brinkley, a 2013 Allegheny College honorary degree recipient and nationally renowned historian, helped lead the civility effort and was on hand to announce the finalists.

“Each of these moments is a uniquely powerful story for today and the tensions, conflicts and incivilities we face,” Brinkley said.

Former Pennsylvania Governor and the first U.S. Secretary of Homeland Security, Tom Ridge, a Civility Prize advisor to Allegheny, opened the event by explaining the history of the Prize. “We risk losing an entire generation of young people to public service because all they hear are our leaders bickering and posturing,” Ridge said. “Allegheny’s own research has shown that to be the case. We must work hard to reverse course, and that’s what the Civility Prize aims to do. And since Allegheny this year is celebrating a 200-year arc of history that nearly parallels our nation’s – it seemed right in 2015 for the Prize to turn to history for inspiring examples of civility.”

The College created the Civility Prize in 2011 to highlight and reinforce the unheralded public figures that advance civility. The Allegheny College Prize for Civility in Public Life annually recognizes two political figures, one from the left and one from the right, who argue passionately but with civility for their beliefs. The Prize seeks to honor politicians who have demonstrated steadfast civility throughout their career or shown authentic, courageous civility at an important moment in time.

The inaugural award was bestowed at the National Press Club in February 2012 to political journalists David Brooks and Mark Shields, in recognition of their longstanding record of civil commentary. In 2013, the College awarded the Prize to Senators Dianne Feinstein (D) and Lindsey Graham (R) for their efforts to exemplify civility while leading debate in some of the most contentious issues of our time. In 2014, Allegheny College judged that the most fitting recipient was an entire group of Democrat and Republican lawmakers – the Women of the Senate – for their role in helping to end the government shutdown in October 2013.

Additional information on the winning moment of civility, and the three other 2015 finalists:

About Allegheny College
Allegheny College is a national liberal arts college where 2,100 students with unusual combinations of interests and talents develop highly-valued abilities to explore critical issues from multiple perspectives. A selective residential college in Meadville, Pa., Allegheny is one of 40 colleges featured in Loren Pope’s “Colleges That Change Lives” and is also featured in “Harvard Schmarvard: Getting Beyond the Ivy League to the College That Is Best for You” and Peterson’s “Competitive Colleges, 400 Colleges That Attract the Best and the Brightest,” among many other guidebooks. Allegheny is one of the nation’s oldest liberal-arts colleges and is celebrating its 200th anniversary of learning at its picturesque campus in 2015.

For interview opportunities or more information, contact Zach Chizar at (717) 439-2182.

About the Allegheny College Prize for Civility in Public Life 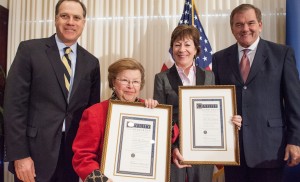 The Allegheny College Prize for Civility in Public Life – the nation’s leading effort to positively reinforce civility in contemporary American politics – will take a different approach this year. In this its bicentennial year, Allegheny is engaging nationally renowned historians to help the College identify and award the most important moments of civility in American history.

Usually, the Prize is awarded to contemporary political figures – such as last year’s prize, awarded to the 20 women of the Senate for their work in defusing a federal shutdown. As Allegheny celebrates its 200th anniversary in 2015 — a history nearly as old as America herself – the time was right to look back, said Allegheny President James Mullen.

“Civility has played an essential and under-appreciated role in American history,” said Mullen. “It is our hope that by helping people to appreciate the profound, essential and positive role that civility has played in American history, we can in some small way inspire current politicians to recommit to civility. And perhaps most importantly, we hope to inspire young people to see politics as a vocation worthy of their aspirations.”

Mullen said that nationally renowned presidential historian Douglas Brinkley, author of Cronkite and other acclaimed histories, has agreed to lead the bicentennial Civility effort with Allegheny. Other prominent historians are assisting by submitting nominations.

“Allegheny’s work to underscore civility has quietly become an important force for good in American politics today,” said Brinkley, who received an honorary degree from Allegheny in 2013. “It will be meaningful to look back over the arc of American history to remind ourselves that civility has been at the root of some of our most important national moments.”