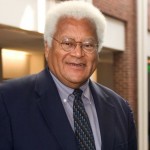 James M. Lawson, Jr. (born 1928) is a minister and civil rights activist. As a college student, he joined the Fellowship for Reconciliation and the Congress of Racial Equality. He declared himself a conscientious objector and refused to report for the draft in 1951, serving fourteen months in prison as a result. As a Methodist missionary to India he studied Gandhi’s principles of nonviolence. Lawson, described by the Rev. Martin Luther King Jr. as “the leading nonviolence theorist in the world,” enrolled in the Vanderbilt University Divinity School and began nonviolence training workshops for the Southern Christian Leadership Conference. These led to the sit-ins in downtown Nashville in 1960. He played a role in efforts such as the Freedom Rides and the Mississippi Freedom Project (Freedom Summer). He was expelled from Vanderbilt because of his civil rights activities.

He became pastor of Centenary Methodist Church in Memphis, and in 1968 was chair of the strategy committee for a strike by African American sanitation workers. He invited Martin Luther King, Jr., to come to Memphis to support the strike. King delivered his famous “Mountaintop” speech there the day before he was assassinated. Lawson continued his ministry, leading Holman Methodist Church in Los Angeles from 1974 to 1999, as well as his social activism and nonviolence training. Vanderbilt apologized to Lawson for expelling him, and he later served as a Distinguished Visiting Professor at the school. 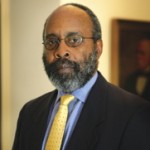 In addition to numerous essays, Outlaw has published On Race and Philosophy (Routledge, 1996) and Critical Social Theory in the Interests of Black Folks (Roman and Littlefield, 2005). He is a member of the editorial boards of Philosophy and Social Criticism and Speculative Philosophy.

Susan Burch, Ph.D., is an associate professor of American studies and former director of the Center for the Comparative Study of Race and Ethnicity at Middlebury College. She is the author of Signs of Resistance: American Deaf Cultural History, 1900 to World War II (New York University Press, 2002). Burch also coedited with Brenda Jo Brueggemann Women and Deafness: Double Visions (Gallaudet University Press, 2006), Deaf and Disability Studies: Interdisciplinary Approaches, with Alison Kafer (Gallaudet University Press, 2010), and Disability Histories, with Michael Rembis (forthcoming in 2014 with University of Illinois Press). She and Hannah Joyner coauthored Unspeakable: The Story of Junius Wilson (University of North Carolina Press, 2007). Burch served as editor-in-chief of the three-volume Encyclopedia of American Disability History (Facts on File, 2009). With Katherine Ott she has curated “Every Body: An Artifact History of Disability In America,” an on-line exhibit with the Smithsonian National Museum of American History (2013).

Burch’s work has been recognized with various awards, including a Fulbright scholarship (Czech Republic, 2004), multiple Mellon Foundation Grants, a National Archives Regional Residency Fellowship, and a NEH grant. She was a co-founding member of the Disability History Association and currently serves on its Board of Trustees. Burch also has served on the Advisory Board of the Society for Disability Studies. She previously taught at Gallaudet University, Charles University (Prague, Czech Republic), King’s College (Aberdeen, Scotland), and The Ohio State University.

Research and teaching subjects “at the margins” draws Burch’s attention, and particularly the historical impact of race, ethnicity, disability, gender, sexuality, and material culture on lived experiences in America, Russia, and beyond. 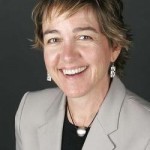 Ellen T. Armour is E. Rhodes and Leona B. Carpenter Chair in Feminist Theology and director of the Carpenter Program in Religion, Gender, and Sexuality at Vanderbilt Divinity School. Armour’s research interests are in feminist theology, theories of sexuality, race, gender, disability and embodiment, and contemporary continental philosophy.

She is the author of Deconstruction, Feminist Theology, and the Problem of Difference: Subverting the Race/Gender Divide (Chicago: University of Chicago Press, 1999) and co-editor of Bodily Citations: Judith Butler and Religion (Columbia University Press, 2006), as well as a number of articles and book chapters. Her current book project, tentatively titled Signs and Wonders: Theology After Modernity, will diagnose and craft a theological response to the shifts in our understanding of “man” and “his” others (sexed/raced, animal, and divine) as modernity declines. 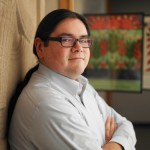 Matthew L. M. Fletcher is professor of law at Michigan State University College of Law and director of the Indigenous Law and Policy Center. He is the Chief Justice of the Poarch Band of Creek Indians Supreme Court and also sits as an appellate judge for the Pokagon Band of Potawatomi Indians, the Hoopa Valley Tribe, and the Nottawaseppi Huron Band of Potawatomi Indians. He is a member of the Grand Traverse Band of Ottawa and Chippewa Indians, located in Peshawbestown, Michigan. In 2010 Fletcher was elected to the American Law Institute.

Fletcher recently published the sixth edition of Cases and Materials on Federal Indian Law (Thomson West, 2011) with David Getches, Charles Wilkinson, and Robert Williams, and American Indian Tribal Law (Aspen, 2011), the first casebook for law students on tribal law. His book The Return of the Eagle: The Legal History of the Grand Traverse Band of Ottawa and Chippewa Indians is forthcoming from Michigan State University Press. In recent years, he published American Indian Education: Counter-narratives in Racism, Struggle, and the Law (Routledge, 2008) and co-edited Facing the Future: The Indian Child Welfare Act at 30 with Wenona T. Singel and Kathryn E. Fort (Michigan State University Press, 2009). Fletcher has published articles with Arizona Law Review, Harvard Journal on Legislation, Hastings Law Journal, University of Colorado Law Review, Houston Law Review, Tulane Law Review, and many others. He is also the primary editor and author of the leading law blog on American Indian law and policy, Turtle Talk.