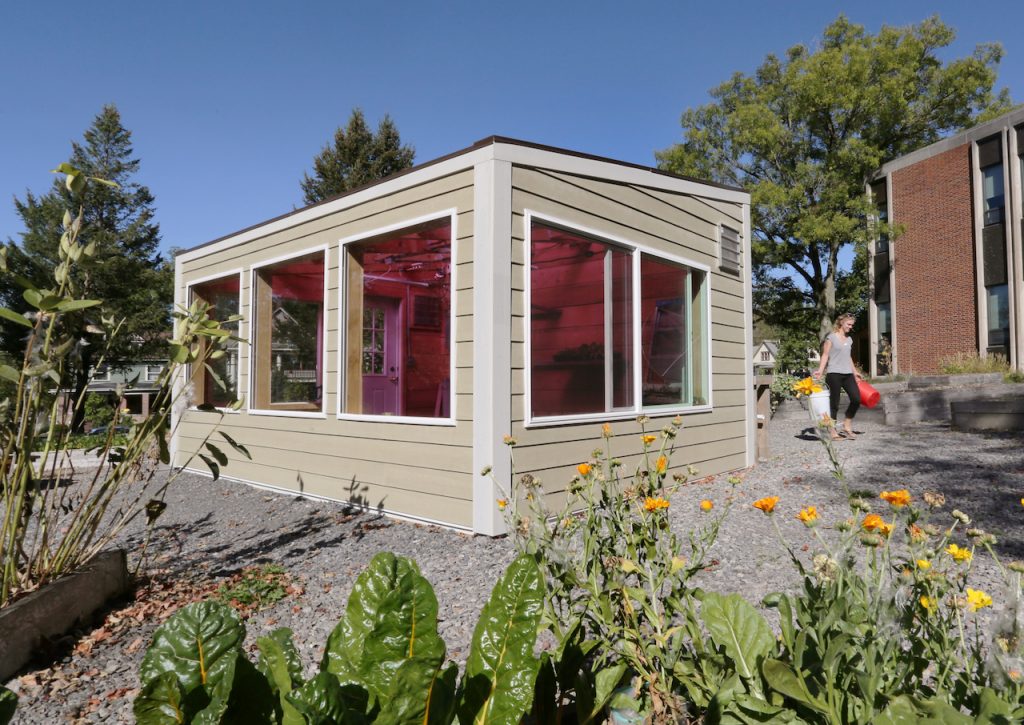 The building is in some ways like any other of its kind, a cozy box of protection against the elements, a source of warmth and light for the leafy green things that will soon grow within.

But the newly built greenhouse in Allegheny College’s Carr Hall garden is different, too, in one fundamental, game-changing way: It produces more energy than it consumes.

“When you have a greenhouse, you expect to pay a lot in electricity and heating costs,” said Kelly Boulton, Allegheny’s sustainability coordinator. “This is flipping that narrative. It shows how possible it is to have a greenhouse without a large energy budget and with a small carbon footprint.”

The roof of the greenhouse is a collection of luminescent solar concentrators, or LSCs, a novel photovoltaic technology that generates electricity from “wasted” light. The panels capture and convert wavelengths of light that plants cannot use into electricity while allowing photosynthetically active light to reach the plants below.

“We’re on the front edge of this,” Carbone said.

The greenhouse will extend a relatively short growing season, increasing production of fresh fruit and produce that is consumed on campus and shared with the community through a mobile food market. It will also serve as a hands-on lab for students and visitors to learn about energy use and food production, renewable energy, thermodynamics and more, Carbone said. A touch-screen monitor mounted to a wall inside Carr Hall displays energy consumption in real time.

“It raises awareness of where our food comes from and the energy that goes into the production of our food,” he said. “It also highlights an important problem, which is that local food isn’t always the most environmentally friendly” when grown in a more typical energy-intensive greenhouse.

Carbone, Boulton and Christine Scott Nelson Professor of Environmental Sustainability Eric Pallant helped secure a $37,500 grant that paid for the panels and heating system. The E2 Energy to Education grant from Constellation, an Exelon company, was part of $380,000 the company awarded to 17 projects nationwide “designed to enhance students’ understanding of science and technology, and inspire them to think differently about energy.”

The construction of the greenhouse itself was partially funded through a grant from Margaret A. Cargill Philanthropies.

Owen Ludwig, a 21-year-old environmental science major from Monclova, Ohio, helped take the greenhouse from blueprint to reality, finalizing the design, choosing contractors and obtaining permits. It was a chance to work with his hands doing the science he loves, Ludwig said.

“I feel like I’ve gotten to leave a very cool and tangible thing on this college campus,” he said.

Sarah Nathan, a senior from Toledo, Ohio, majoring in environmental studies, spent part of the summer developing lesson plans that incorporate the greenhouse. She said she hopes the greenhouse and the LSC technology can be a model for other, larger-scale farming operations.

“That’s a really good application of the greenhouse. Students can be looking at the technology we’re using, assessing how feasible that is for farmers in the area, and if it’s not feasible, then what other options do they have for eating local food in the winter?” said Nathan, 22.

Nathan and Ludwig have both worked with Carbone on the idea of creating a flexible photovoltaic material that could be rolled out over areas for larger-scale or commercial use.

“I’m excited about producing energy and taking advantage of this land resource, this farm land, where there’s a lot of space,” Carbone said. “There’s not a lot of roof space in the country but there are a lot of fields and there are a lot of places where people are growing food where we can potentially also be generating sustainable energy if we’re smart about it.”