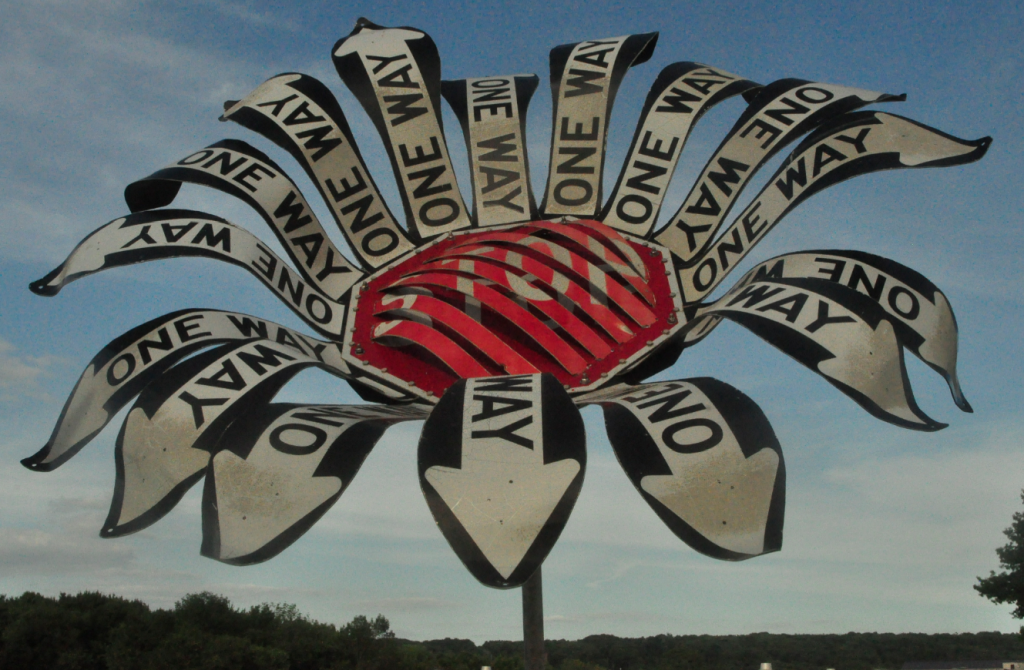 In my travels, I’ve gazed upon many spectacular public art pieces in small towns and large cities. But this summer I encountered one of the most unique.

On my trip to Meadville, Pa., in Crawford County just across the Ohio border, I viewed a magnificent display called “Read Between the Signs,” which is made of discarded highway signs. It’s on a fence at the PennDOT maintenance building along Route 322 heading into the city from the west.

Since 2002, when Allegheny College art professor Amara Geffen and a former highway maintenance manager initiated the project, the display has expanded to 1,200 feet long.

It has been embraced by Allegheny’s Center for Economic and Environmental Development and PennDOT, and many Allegheny art students and PennDOT workers have collaborated.

The work, which continues to grow each year, depicts life in Crawford County. It includes images of landmarks such as the courthouse and Allegheny’s Bentley Hall, plus events such as the county fair and Thurston Balloon Classic.

There also are farm and seasonal scenes, and images of several buildings standing in the quaint town of 13,000 residents.

The fence isn’t the only part of the project. There are sculptures of flowers and posts in the corner of the parking lot — all made of worn out or damaged road signs. Instead of scrapping them, they have been used to create something which enhances pride in the community.

This art project is not the only one which attracts attention among visitors to Meadville.

An urban pedestrian walkway through Market Alley in the heart of town was completed in 2011, and across Park Avenue from the walkway is a colorful 12-by-73-foot mural comprised of 27, 4-by-8-foot panels painted by local residents and business owners.

It is titled “Streams Converging: Meadville at the Center.” Organized by 2007 Allegheny College graduate Berry Greene, it is on a brick wall and depicts the rich history of Meadville and Mill Run, a small stream which runs through town.

Meanwhile, a city-owned parking garage sports blue and white waves made of old street signs that focus on Mill Run. “Park Theater Memories,” completed in 2009 by Greene, is a 17-by-80-foot mural on the back wall of the former Park Theater.

Even the daily newspaper — the Meadville Tribune — got into the act with a sculpture series called “Blue Box Renaissance,” in which 11 newspaper vending boxes have been transformed into works of art.

Geffen also collaborated on many of the other art projects around town.