Jan. 12, 2015 – The art galleries of Allegheny College will present “Performing Blackness :: Performing Whiteness” from Tuesday, Jan. 20 through Tuesday, March 3. The artists will talk about their work at 7 p.m. on Jan. 20, with a reception following in the galleries from 8 to 9 p.m. A second reception, from 7 to 9 p.m. on March 3 in the galleries, will close the exhibit. Both the exhibit and the receptions are free and open to the public.

Curated by Gallery Director Darren Lee Miller, the exhibition examines constructions of racial identity. The artworks interrogate oversimplifying binaries and destabilize the often unexamined position of “whiteness.” The artists deploy visual texts in the service of asking uncomfortable questions, reflecting upon identity and asking the viewer to consider his/her own role in building, enabling or perpetuating stereotypes. 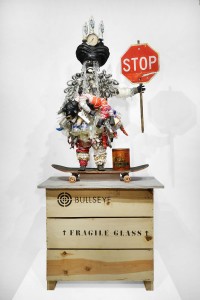 The idea for the exhibition came from the National Public Radio series “Code Switch,” launched in April 2013 to explore “frontiers of race, culture and ethnicity.” Some of the earliest stories focused on code switching, the practice of literally changing the grammar, syntax and style of delivery of one’s speech in order to more appropriately match the expectations of a situation or peer group. The practice raises questions about authenticity, (self)acceptance, assimilation and cultural legacies, pointing to the performative, fluid nature of identity construction.

The exhibition explores the ways in which Afro-Diasporic, Native-American, Asian/Pacific and Latino identities contend to construct themselves in relation to a white identity so normative and privileged that it largely remains unnamed.

This exhibition was made possible, in part, with support from the Andrew W. Mellon Foundation grant for Collaborative Undergraduate Research in the Humanities at Allegheny College, as well as contributions from the following departments and offices at Allegheny College: the Art Department, Black Studies, Dance and Movement Studies, Philosophy and Religious Studies, Political Science, the English Department, the Center for Intercultural Advancement and Student Success, and the Office of Diversity and Organizational Development. Other support comes from the Pennsylvania Partners in the Arts (PPA), the regional arts funding partnership of the Pennsylvania Council on the Arts, a state agency. State government funding comes through an annual appropriation by Pennsylvania’s General Assembly and from the National Endowment for the Arts, a federal agency. PPA is administered in this region by the Arts Council of Erie.

Gallery hours are Tuesday through Friday, 12:30-5 p.m.; Saturday, 1:30-5 p.m.; and Sunday, 2-4 p.m. Visitors are asked to call ahead to verify hours, since programs are subject to change. All events are free and open to the public.

The Art Galleries, which are wheelchair accessible, are located in Doane Hall of Art, east of North Main Street between College and John Streets in Meadville.

Image: “So Many Dead Black Bodies,” by Vanessa German.