An interview with Artist in Residence Steve Prince was published in Issue 78 of Image Magazine. The interview accompanied an article by Beth McCoy of SUNY Geneseo titled “Second Line and the Art of Witness: Steve Prince’s Katrina Suite.”

Professor Prince’s wife, Associate Professor of English Valerie Sweeney Prince, also wrote an article on Steve’s work for the International Review of African American Art. The article is titled “Portrait of a Marriage: Steve A. Prince’s Old Testament as Viewed by His Wife.”

Richard A. Schindler, Associate Professor of Art, presented the paper, “Dutiful Daughters? Phoebe Gloeckner’s A Child’s Life and Alison Bechdel’s Fun Home,” in a session on Issues in Contemporary Comics at the second annual Mix Symposium at Columbus College of Art and Design on September 27-28, 2013.

In June 2013, Max Lindquist ’14 attended the Association of Environmental Studies & Sciences Annual Conference where he presented a paper he co-authored with Assistant Professor of Global Health and Development and Environmental Studies Liz Olson, Associate Professor of Communication Arts Michael Mehler, Professor of Environmental Science Eric Pallant, Visiting Artist Tanja Beer, Theater Designer Leslie Fairman, Shannon Wade ’13, and Samantha Hoderlein ’15. The title of the paper is “Constructing Theater Scenery That Is Waste Free, Good for the Environment, and Good for People,” which was based on the spring 2013 Junior Seminar course taught by Professor Olson.

We’re delighted to welcome  Artist-in-Residence Steve Prince to the Art Department this year.  If you’d like to get to know him, check out this recent interview in Image magazine, issue 78. 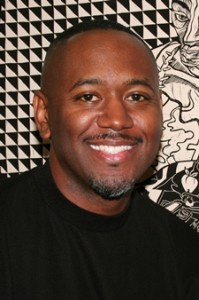 Or better yet, drop by his studio on the first floor of the Art Department, a new space sectioned off of the galleries and accessible from the corridor.  He gladly welcomes visitors.

Steve Prince is teaching drawing this fall semester, but creates in various media, including printmaking and sculpture, and has worked with art students of all ages.

Steve would like to take his message to the streets. He explains:  “That’s where my visual ministry is focused.  That’s where my church is.  My art becomes a traveling evangelism show for our contemporary culture, providing answers for today’s troubled world.  But it also becomes a celebration; a celebration of that very broken yet extremely beautiful world. The art becomes a bridge to help people find their way from that brokenness to the beauty that I so clearly see.” 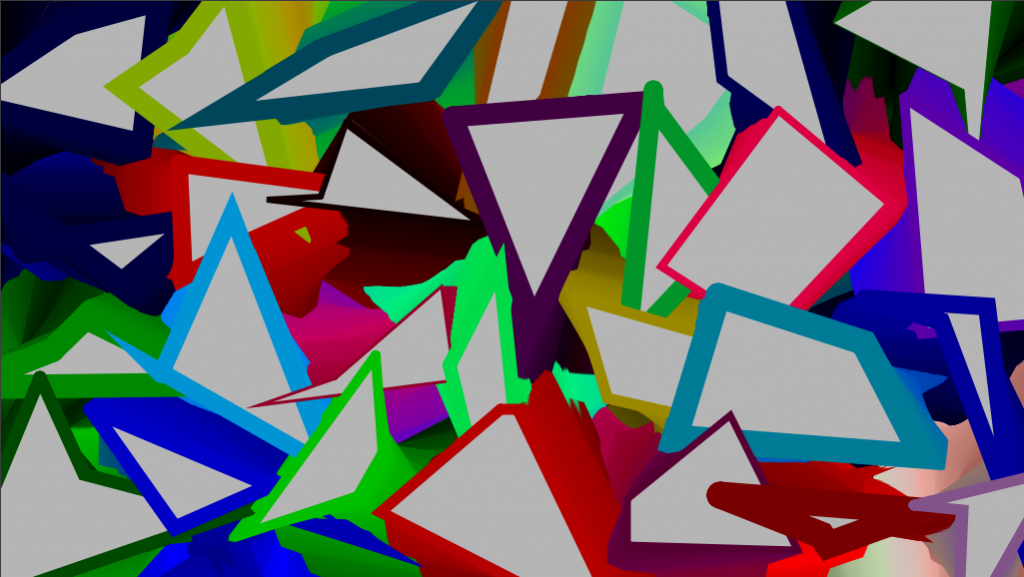 Professor of Art George Roland had a work of computational art accepted for exhibition in the 102nd Associated Artists of Pittsburgh Annual Exhibition, April 21–June 23, held in the Heinz Galleries of the Carnegie Museum of Art. This year’s exhibition was selected by David Norr, chief curator of the Museum of Contemporary Art in Cleveland.

Roland’s work was constructed through a computer program he developed using the Processing language. The program creates the images in real time, not by video or recording. As the program runs, the images appear as a rigid grid, vibrate, and then become a looser, more fluid structure.

Inspiration for the piece came from Roland’s desire to take static structures and give them the ability to perform flowing and organic movements.

“It is a singular honor to have my work represented at the Carnegie Museum of Art,” Roland says.

Staci Orie Summers ’93 uses an Allegheny opportunity to pursue her passion for volunteerism. 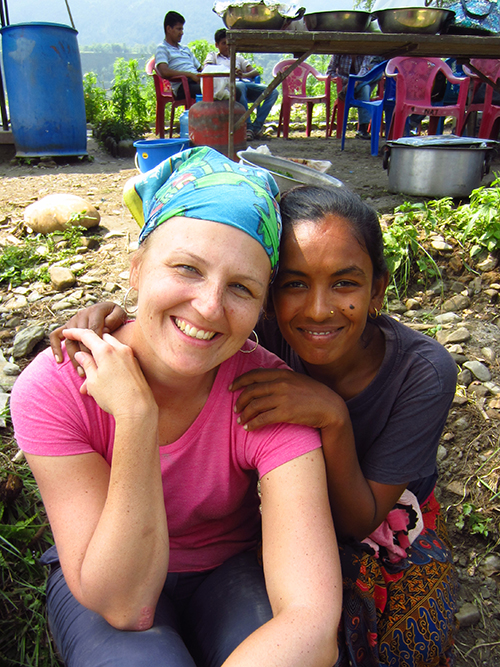 So in college, when a friend asked her to participate in Hut-A-Thon – an event where students build a hut on the Allegheny campus to raise awareness and funds for homelessness – Summers, a sophomore at the time, jumped at the opportunity to give back.

She never realized that this event would reignite her passion for helping others – and would eventually lead to her career in international development.

“As an art history major, I was unsure of what I wanted to do upon graduation,” Summers said. “This experience at Allegheny inspired me to pursue my passion for connecting with other cultures and partnering with people in need.”

Summers first acted upon that passion in 1994, when she traveled to India as a volunteer with Habitat for Humanity International (HFHI), an organization dedicated to eradicating poverty housing. One year later, she officially turned her professional efforts to making the world a better place, serving Pittsburgh Habitat for Humanity as an AmeriCorps VISTA representative in fundraising and community leadership development. She then went on to earn her master’s degree in international training and education from American University in Washington, D.C.

Throughout the years, Summers’ desire to, in her words, “dive into unfamiliar worlds,” has been a driving force. In addition to being a wife to her husband, Jason, and a stay-at-home mother to their children, Caton and Ainsley, Summers now serves as a volunteer team leader with HFHI’s Global Village Program, which facilitates short-term international house-building trips.

Since 1994, Summers has traveled to 29 countries, including Argentina, Brazil, Guatemala, France, Honduras, Jamaica, Kenya, Madagascar, Nepal, New Zealand, Turkey, and Zambia, and she has no plans of slowing down. In fact, she is planning her next trip to Malawi in September. 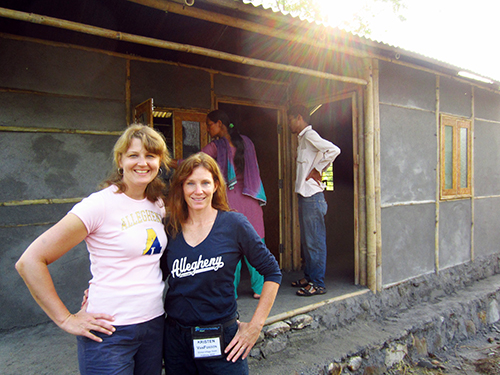 Summers says that when she arrives at a site, the homes can be in any stage of construction. She and the team typically work alongside the future homeowner and members of the community for one to two weeks performing a variety of tasks that range from making and laying bricks to constructing a home out of bamboo. In Nepal, Summers and her team worked alongside a woman named Sharmila Pariyar to construct a home for Pariyar and her son, Uttam.

“Our team, with help from the community and a few hired technicians, built Sharmila’s bamboo-style house in just eight days,” Summers said. “Working alongside the Nepalese was every bit as amazing as I had expected. And just like with all of my trips, the language barrier didn’t matter. The feelings of compassion and love translate to any language.”

Although she has participated in numerous trips, Nepal was the first where Summers served as the volunteer team leader. “The unknown is always the team, all or most of whom are traveling solo and are meeting for the first time in a strange place,” she said. “It’s like throwing a bunch of great ingredients into a hot pot to make soup – you don’t really know how it’s going to turn out until it’s been on the fire!

“I love the challenge of being a team leader because you have to come up with just the right mix of people,” she continued. “You live together, eat together, and work together on these trips, and along the way you hope the magic happens – the opening up, the bonding, the looking out and listening, the contagious laughter. I’ve never left a country with a dry eye. That is why I build; it doesn’t feel like work to me. I plan to do this as long as I’m breathing!”

In addition to serving as an HFHI volunteer, Summers donates her time and resources to her alma mater. Since graduation, Summers has served as a Gator Greetings volunteer, as co-chair of her 10th Reunion Committee, and as an Alumni Council member. She also is a member of the Timothy Alden Council.

“Allegheny gave me the skills and confidence to do anything I wanted to do,” Summers said. “I give back because I know I wouldn’t have been able to attend Allegheny if it weren’t for the generosity of others. I want to give current students those same opportunities. I also know that Allegheny has been managed well and will put my funds to good use.”

To read more about Summers’ travels, work with HFHI’s Global Village Program, and her passion for hospitality, visit Globalstaci.com.