Shannan Mattiace, professor and chair of the Political Science Department at Allegheny College, has received a 2018–19 Fulbright Award to teach and conduct research in the South American nation of Chile.

Mattiace said she plans to live in Chile for five months beginning in February 2019.

“It has been my dream for decades to receive a Fulbright Award,” Mattiace said. “Almost 30 years ago I lived in Santiago, Chile, for three months as a State Department student intern and have longed to return. I will be returning as a scholar of Mexican politics and hope to share my interest and experience on Mexican politics with Chilean students and professors at the Catholic University of Chile in Santiago.”

The Fulbright Program, which increases mutual understanding between the people of the United States and the people of other countries, is the flagship international educational exchange program sponsored by the U.S. government. Only about 500 teaching and/or research Fulbrights are awarded each year.

“I am incredibly honored to have been chosen by the Fulbright Commission to be a cultural ambassador to Latin America, representing the long-standing ties between North and South America. I so appreciate Allegheny College’s support of me in this project, which has been unfailing,” Mattiace said.

“The money that funds Fulbright awards is carved out of the State Department’s budget, so folks in Washington definitely think of the program as an effort at soft diplomacy,” said Patrick Jackson, Allegheny’s director of fellowship advising. “One of the reasons I think Shannan’s project was chosen is the way that she was able to successfully and convincingly draw a connection between the work she plans to do on the Chilean frontier with Bolivia and Argentina with interests that the United States has with regard to our own border with Mexico. Chile is trying to solve many of the same complex problems with indigenous communities and migrant workers that the United States and Mexico are trying to address. As an American specialist on Mexican politics, Shannan is in a unique position to study what is going on in Chile.”

Part of her time will be spent teaching and lecturing on immigration, Latin American indigenous and social movements, and Mexican politics at the Pontificia Universidad Católica de Chile (PUC), Mattiace said. The other time will be spent doing research, comparing indigenous communities in a border region of Mexico with indigenous communities on the western Bolivian border with Chile, she said. Mattiace also plans to establish contact with Chilean indigenous colleagues in Santiago for a future book project, she said.

“Latin Americans know far less about their neighbors and their region than many of them know about the United States and the rest of the world,” Mattiace said. “As a U.S. scholar of Mexico and of Latin America, I hope to bring a distinct perspective on Latin American politics to Chilean students. The research project on indigenous communities is explicitly comparative, examining indigenous communities in two border regions — Chile/Bolivia and Mexico/U.S. — that have been successful in keeping violence low through self-governance and autonomy in contexts of illicit activity. As Latin America is the most violent region of the world, understanding how to reduce levels of violence and crime is of intense interest to a host of actors, including U.S. policy makers.”

Mattiace becomes the 14th Allegheny faculty member to receive a Fulbright Award in the past 20 years.

Professor of Political Science Shannan Mattiace attended a research workshop on September 21 and 22 sponsored by the Kellogg Center for International Studies at the University of Notre Dame and the Latin American Research Review (LARR) on Societal Responses to Criminal Violence in Latin America with co-authors Guillermo Trejo and Sandra Ley.

Professor of Political Science Sharon Wesoky recently published a book, co-edited with Kingfai Tam of Hong Kong Polytechnic University, titled “Not Just a Laughing Matter: Interdisciplinary Approaches to Political Humor in China (Springer Humanities).” The book, a product of a multi-year collaboration, grant from the Chiang Ching-kuo Foundation, and international conference in Hong Kong, collects the work of 12 international scholars to examine the role of multiple genres of political humor in China from the late Imperial period to the present day. Wesoky also recently was invited to contribute a piece to the inaugural “Women and Gender in China” blog. Her article, “(Dis)continuities in Chinese feminisms: navigating local and global” can be found at https://www.wagic.org/blank-2/2017/08/29/Discontinuities-in-Chinese-Feminisms-Navigating-Local-and-Global.

Employers want to meet YOU at the WestPACS Job and Internship Fair, Wednesday, October 11, 10 am – 3 pm at the Monroeville Convention Center.

It’s the largest job fair in the region with 150 employers expected!

Pre-register today for FREE at www.westpacs.org.

Career Education provides transportation for $10. Sign-up by 4 pm on Friday, October 6, 2017, in The Gateway.

If you are interested in human rights work, international affairs and/or community organizing, this would be a fantastic experience for you.  Apply soon…it is very competitive.
John Rooney, a 2014 AC grad, was awarded a fellowship in 2015.  Click here to read about his experience.
Feel free to ask Professor Brian Harward or Patrick Jackson for advice on applying or for more information. 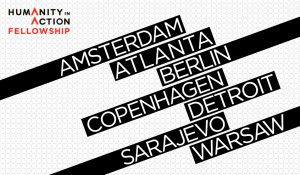