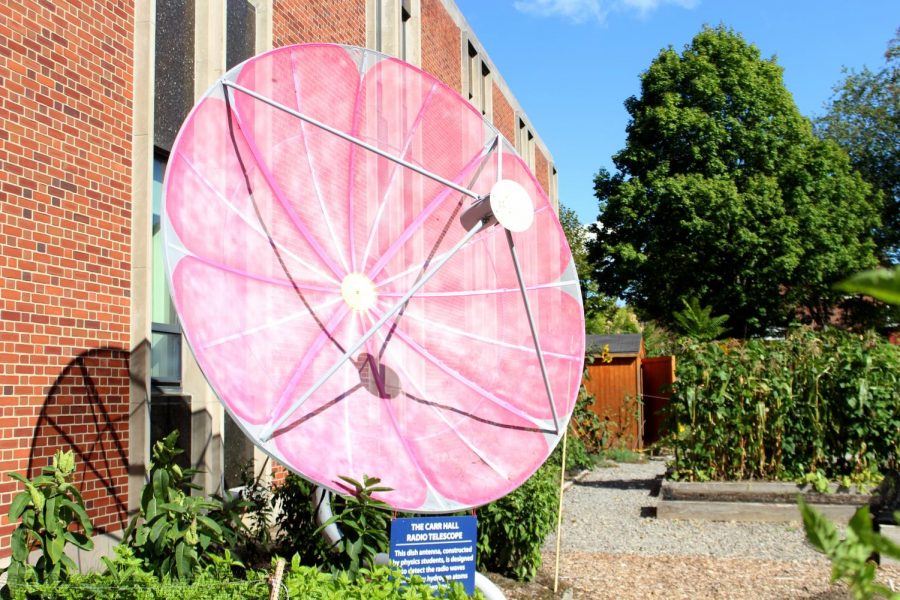 The radio telescope, located in the Carrden next to Carr Hall, was recently painted as a cosmos flower by Ben Ramsey, ’22. Ramsey worked on the radio telescope as part of his summer research with Professor of Physics Dan Willey.

Situated among the greenery of the Carr Hall Garden sits a large, repurposed television dish.

The dish in question — a radio telescope managed by the physics department — received a number of upgrades through a student’s summer research opportunity. The most observable being its new paint job, courtesy of physics major and energy and society minor Benjamin Ramsey, ’22.

“It now is painted like a flower, a cosmos flower to be exact,” Ramsey said. “It’s a bit of a play on words. … It’s representative of the greater cosmos that we’re studying with the telescope.”

Ramsey, who plans to use data collected from the telescope as part of his senior comprehensive project, explained that the radio telescope itself receives information from across our universe in the form of a specific frequency of radio waves.

“That telescope specifically records 21 centimeter neutral hydrogen emission,” Ramsey said. “Basically, a bunch of clouds in our universe are constantly emitting radio waves, and the radio telescope gathers those radio waves and receives them and then spits out data for me to look at.”

“(The Milky Way) is actually just made up of mostly gases with some dust particles included,” Willey said. “So when you want to look far into our galaxy, the problem is that a lot of light can’t get through all that dust and some of the gas as well. … If you want to see to that distance, you can’t see it optically because the light doesn’t get there, but the radio waves from this hydrogen do get here.”

Willey explained that it is possible to create a map of the galaxy by plotting points received by the radio telescope — an almost impossible feat through any other observational method.

“We’re stuck inside the galaxy,” Willey said. “We can’t go outside the galaxy and take a picture. It’s just way too far. You’d have to be hundreds of millions of light-years away to be able to look at this, and we’ve never sent anything close to that far. It’s hard to see what we’re in because we don’t have the perspective.”

According to Ramsey, the radio telescope has been an ongoing project for senior comps; something that has “always been sort-of functional, but never fully functional.”

“A lot of the comps on the radio telescope have been fixing it and making it ready for the next team to use it,” Ramsey said. “That’s not to tear down anyone’s work. I think everyone who’s worked on the radio telescope has done really good work, but (it) allows us to do observational astronomy. It’s really the only research that’s going on at Allegheny that is observational astronomy.”

Willey remarked that Ramsey’s summer work earned him renown within the physics department.

“I don’t think anybody has worked on this over the summer, which is good because oftentimes what happens is the students do the senior project (on the telescope), and by the time they’re ready to take data, time’s up,” Willey said. “So hopefully (Ramsey got) a head start by working over the summer.”

While the telescope has been worked on as recently as spring 2021 by then-senior Austin Shaw, Willey cited its troubled past as part of the reason for its constant need for work.

“That dish … used to be on top of Murray Hall,” Willey said. “Maybe they were getting T.V. from it. I don’t know.”

Willey explained that once it was reconfigured as a radio telescope, the dish sat on top of Carr Hall, as more exposed sky produces better results.

“The last time they renovated Carr Hall, when they moved the environmental science department in, we had to take it all down,” Willey said. “And after that, they said, ‘well, we don’t want people on the roof anymore.’ So we had to pick a place and (its current spot) was the place.”

According to Willey, the telescope currently still needs work on the motors that allow it to move up and down — at full functionality, it is capable of moving in all directions — and changes to wiring configurations, but otherwise Ramsey will soon be ready to begin data collection.

Ramsey hopes the opportunity to collect data from the radio telescope will help propel him forward post graduation.

“I want to go to grad school,” Ramsey said. “And I think this project opened my eyes to radio astronomy, and really observational astronomy in general. I always dreamed of being a theoretical physicist and dealing with general relativity, but … really this comp has opened up my perception to the idea that maybe I want to pursue observational astronomy as a potential career path.”

Willey acknowledged the hard work Ramsey put into the project, but still made clear he had his contributions.

“You can give him all the credit, but I did suggest (painting the telescope as a cosmos flower),” Willey said.

Roman Hladio is a junior from Wexford, Pennsylvania. He is an English major with a Journalism in the Public Interest minor. This is his second year on… 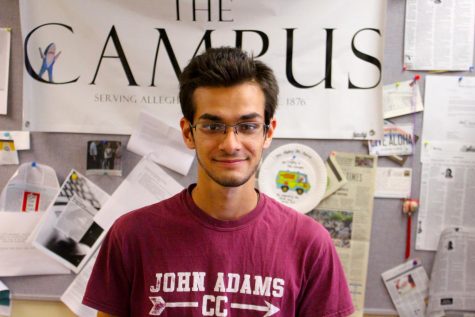 Sami Mirza is a sophomore from South Bend, IN. He intends to major in International Studies with a focus on the Middle East and North Africa and minor…

The era of multi-messenger astronomy is upon us. In the last few years, the LIGO observatories in Hanford, WA, and Livingston, LA have made it possible to witness cacophonous mergers of black holes and neutron stars, then call out to other telescopes around the world and in deep space, all in nearly real-time. But how can we tell so quickly what is happening out in the cosmos, just by staring at some convoluted data? The answer, surprisingly, can be understood through audio engineering — and the power of music. In this seminar we will explore connections between merging black holes and the physics of artful sound, examining what the pitch, timbre, intensity, and tempo of musical instruments can teach us about how to interpret this brand-new field of gravitational wave astronomy.

Meadville, Pennsylvania – The accredited degree program in Physics at Allegheny College has been ranked as a “Best Value for the Money” in the annual nationwide ranking of U.S. colleges and universities by College Factual.

The Physics program at Allegheny is ranked #24 out of 261 programs at colleges and universities in the United States reviewed as “Best for the Money.” This places Allegheny’s Physics program in the Top 10% of all such programs in the country reviewed by College Factual for value.

See the full ranking of Best Physics Schools for the Money.

In addition, Allegheny’s Physics program ranked #1 out of 18 colleges in Pennsylvania for value. This makes Allegheny the best value school in the state for Physics majors.

Allegheny has achieved this ranking 2 years in a row.

See the full ranking of Best for the Money Physics programs in Pennsylvania.

Learn more about Physics as a major.

College Factual’s Best Physics Schools for the Money Ranking takes into account the average yearly cost of the school, the average time students take to graduate, and the quality the school provides to students. This means schools who rank highly are offering a good value for the money for Physics graduates.

Allegheny College is located in Meadville, Pennsylvania in what is generally considered a small town setting, serving approximately 1,900 graduates.

Learn more about value at Allegheny.

College Factual, located in Troy, New York, is the leading source of data analytics and insights on college outcomes. It provides in-depth coverage for over 2,500 colleges and universities and over 350 college majors. These insights are available to students from over 200 countries interested in pursuing accredited college degree programs in the United States.

Learn more about the methodologies employed by College Factual.

Allegheny received a grant of $150,000 from the George I. Alden Trust to create a Center for Innovation and to purchase a high-definition, full-dome projector for the planetarium, which will allow some of the projects developed in the center to be tested and displayed in the planetarium. Recognizing the importance our students and their families understandably place on post-graduation outcomes, the college has committed to offering more opportunities for students to put their classroom learning into action. The Center for Innovation and interactive planetarium will offer our students the ability to engage critically and creatively with real-world situations and problems, working across the curriculum and co-curriculum in intentional ways.

Held at 12 different locations around the United States and Canada each year, the American Physical Society Conference for Undergraduate Women in Physics aims to spread awareness about the lack of women working the physics field, as well as connecting women who are studying the profession.

Sebolt, Rohaley and Krieger had the opportunity to attend the New Jersey conference this year on Jan. 21. The head of the department at Allegheny is Dr. James Lombardi. […] Read more at The Campus