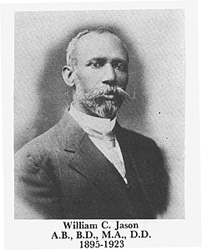 “Who is William C. Jason?” you might ask. Jason was Allegheny’s first black graduate, class of 1888. He dedicated himself to hard work and educational access, and even went on to become President of Delaware State University!  Jason spent his teens trying his hand at several different vocations, namely as a printer, barber, and even shopkeeper at the age of 18 before he became a Gator. As President of Delaware State University William Jason was known to accept any student at the college, even if they could not afford tuition, as long as the student was dedicated enough “to work his passage.”