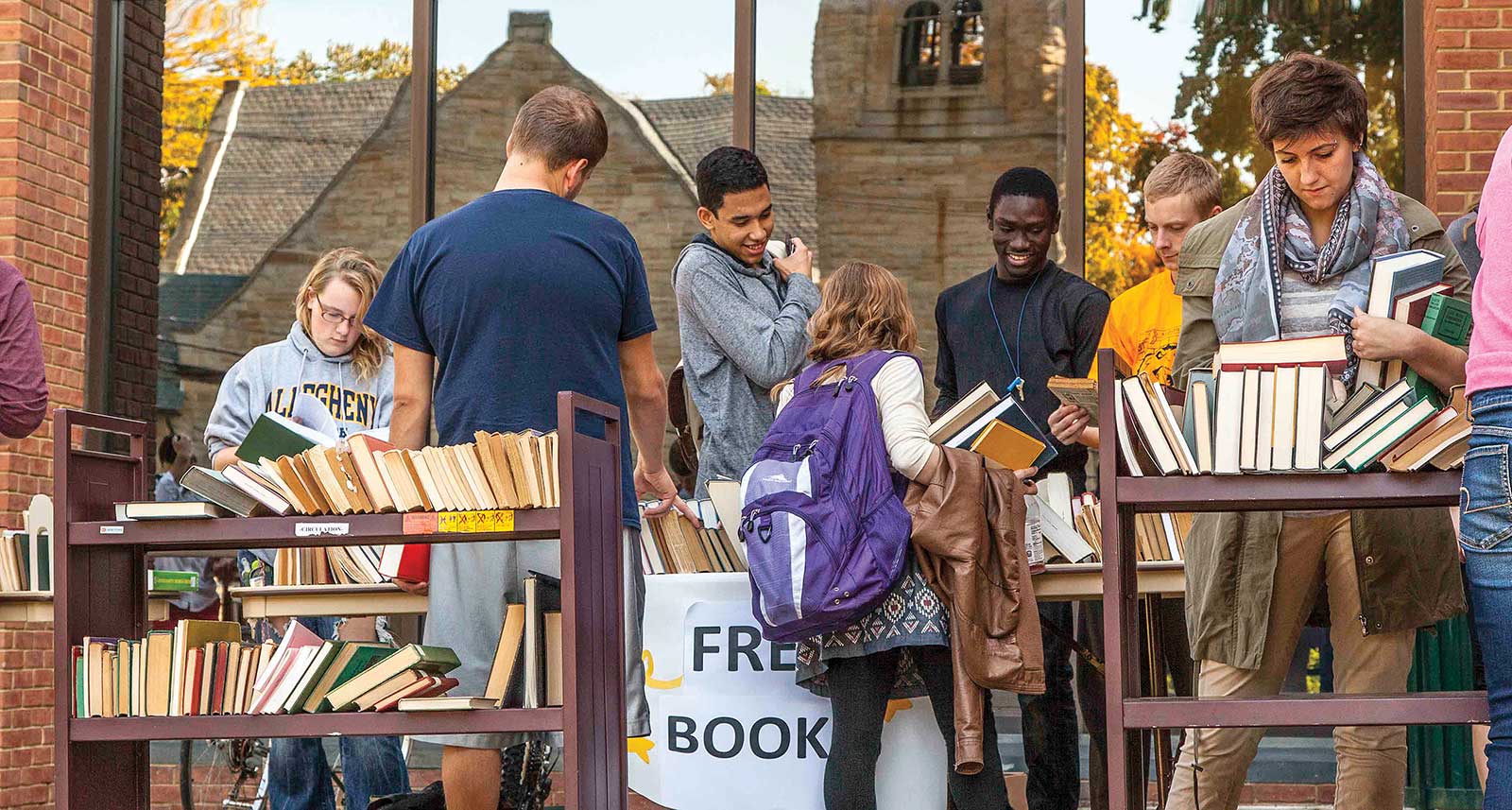 Awarded each spring semester to an outstanding foreign language student to help defray the expenses of study abroad.

Established through gifts from Harald Sauer in memory of his mother, Elli, father, Georg and brother, Johannes and later added to in memory of Harald.  The prize is awarded annually to the outstanding senior minoring in German.

Awarded annually to a student majoring in one of the modern languages. Professor Kalfayan taught French at Allegheny from 1927 until his untimely death in 1954. Selection is based on superior academic performance and demonstrated financial need.

Established by an anonymous gift in honor of Alice Kemp Moessner, an instructor at Allegheny in the 1950s. It is awarded annually to an outstanding junior or senior student chosen by the Department of Modern and Classical Languages.

Established in honor of Professor Blair Hanson, former chairperson of the Modern & Classical Languages Department, in recognition of her many years of dedicated teaching at Allegheny.  It is awarded annually to the student in the department who submits the most outstanding thesis in a modern foreign language.

Established by an anonymous donor to honor the memory of Mildred Ludwig, Allegheny instructor and matron of the Tarbell House in the 1930s.  It is awarded annually to an outstanding student majoring or minoring in a modern foreign language.

The WUSTL-ALLEX Intensive Chinese and Japanese Institute will offer intensive beginning level classes in Japanese and Mandarin Chinese at Washington University in St. Louis for seven weeks in summer. Each class meets for 2 hours per day, 5 days a week for 7 weeks. The course is intensive and requires 3-5 hours of mandatory self-managed study per day. A limited number of scholarships are available to qualified students. Please visit the Institute’s webpage for more information.

VolunQuest is actively seeking students to intern for The Ministry of Education in Quintana Roo, Mexico as ESL teachers in the public primary schools of Isla Mujeres.   Participants complete training in the national curriculum along with ESL teacher training and current teacher observation the first week of their participation. They are then placed with their own classes and constantly supervised, guided and given feedback back by their supervisors. Isla Mujeres is a little piece of paradise just off the coast of Cancun. Its white sandy beaches with turquoise waters and glorious sunsets have attracted a thriving tourist industry. Isleños are warm and welcoming to visitors, but without a working understanding of the English language, many new jobs are beyond their reach. The island is an extremely safe and family-friendly destination, with very low crime rates.

Scholarships for students of Arabic

Scholarships for students of German

Our language students undertake enriching internships all over the world. A recent sampling:

Tyler Allen (‘18, International Studies/Religious Studies double major) taught in the LEAP (Learning for the Enrichment and Advancement of Palestinians) program in Tyre, Lebanon.

During the past academic year, 8 of our students participated in the World Language Program, earning 2 credits for instructing elementary school language students in Meadville and Crawford County.

“The most amazing and fulfilling experience I have had since I became a student at Allegheny is the internship I participated in during the summer after my sophomore year in Fismes, France. I learned about the internship through one of my French Language professors, and I hurriedly applied. Through this internship, I traveled first to Paris and learned all about the history of the city for several days, and then I traveled east to Fismes, France, which is a small town just west of the city of Reims. There, I was able to work in the Office of the Mayor and help them prepare for their inauguration of a historical monument honoring the lives of American (specifically Pennsylvanian) soldiers who rebuilt the collapsed town during World War I. A connection between Meadville and Fismes has endured ever since this period, and I am so grateful that I was able to meet the wonderful people living in that small community, practice and strengthen my French-speaking skills, and live with the most amazing and welcoming host family.”

Ties between Meadville, Pennsylvania, and Fismes, its sister city in France, date from World War I. Located in the Champagne-Ardennes area, just west of Reims, Fismes (population 5,500) was rebuilt after 1918 with help from the City of Meadville and the Commonwealth of Pennsylvania. Historically, a more robust relationship between the two towns has been impeded by the problems of distance and language, but as the centennial of this relationship approaches, Allegheny College and the Mayor’s office of Fismes are instituting a month-long summer internship in the Mayor’s office for qualified and interested Allegheny College students.

In Fismes, students work in a variety of offices and municipal institutions and develop an understanding of local government and issues in a small French city. Typically, the internship takes place between in late May/June.