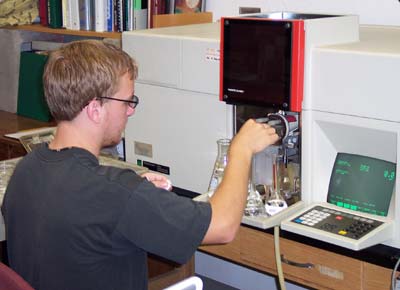 Professor Caryl Waggett doesn’t teach economics, but she still knows how to capitalize on an investment and transform it into greater rewards.

Waggett joined Allegheny’s Environmental Science faculty in 2003. When designing an environmental health class for her first semester, she chose lead poisoning as a topic because it allowed her to discuss what she considered to be a “success story” in the discipline: a health outcome that had been clearly associated with a specific environmental exposure and that had been effectively addressed through screening and prevention.

Through class research, Waggett and her students found that lead is still a significant health concern, particularly in certain states and in regions with older homes and a high population of lower-income families.

Along with students Suzanne Young and Seth Wilmore, Waggett applied to the Dean’s office for a Shanbrom Collaborative Research Grant to explore this area of research in her first summer at Allegheny. The project was designed to test the amount of lead in dust and soil of older homes with young children in Crawford County.

After receiving the grant, Waggett, Young and Wilmore spent much of the summer refining methods, identifying collaborators in the community and discovering needs within the state. By the end of summer, the researchers had developed appropriate protocols and initiated field research and data collection.

When these findings were added to the research conducted by her environmental health class, Waggett felt that there was sufficient information to justify further research. Preliminary findings had shown that the dust in homes and the soil in yards had significant quantities of lead and could pose a risk to children.

Waggett went on to apply for a grant through the Environmental Protection Agency to explore the possibility of screening children directly for lead exposure. She was awarded the EPA grant and credits the College’s initial support with setting the stage for that success. While Waggett says she could have funded some of the materials herself, the students’ summer stipends provided by the Dean’s office were a significant and critical component.

“I simply could not have conducted this research without student assistance—and would not have wanted to,” says Waggett.