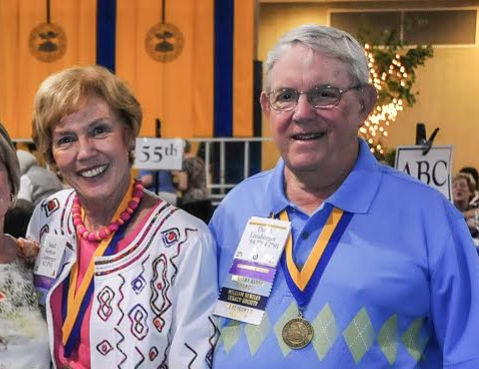 Jim and Sandi Linaberger are two of Allegheny’s most loyal alumni, having been active members of the Allegheny community since their days as students.

Sandi wants those considering making a gift to know that they would be investing in the future of some of the nation’s best and brightest students. Both Sandi and Jim believe that an Allegheny education changes lives and truly prepares students for their careers.

Jim, known to many as “Dutch,” graduated with a degree in history. After college, he went on to become an executive with People’s Natural Gas, where he worked for 37 years and from where he later retired. As an Allegheny student, he served as senior class president, a resident adviser, a member of Phi Gamma Delta, and head waiter at Brooks Dining Hall.

Sandi graduated with a degree in elementary education and went on to become a teacher, where she enjoyed “a most rewarding career.” Her activities as a student included Kappa Kappa Gamma and the Allegheny Singers. Sandi has fond memories of a beautiful campus, outstanding professors, and close, good friends.

Jim and Sandi were both married to Allegheny alumni who passed away – Elsa Held Linaberger ’60 and William S. Smith ‘61. During Reunion Weekend 2003, Jim and Sandi met and fell in love. Both have children who are Alleghenians, carrying on the family legacy.

Jim and Sandi are supporters of the College through their service and financial support. They have served on numerous reunion committees, and Jim was a trustee of the College from 1980 to 1988. He was awarded Allegheny’s Blue Citation in 2009 for his outstanding service to Allegheny.