The Tippie Alumni Center offers places to relax, converse, view memorabilia, look at yearbooks or books published by faculty and alumni, enjoy a meal at one of our alumni events and participate in meetings. Most of all, the Tippie Alumni Center is to be shared and enjoyed by Allegheny alumni, trustees, friends, students and staff. 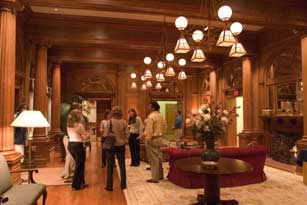 Through the years, the Alumni Lounge was perhaps the least modified portion of the main floor. Nonetheless, considerable restoration was needed to bring the majestic room back to its original glory. The massive pillars were removed, sections separated, planed, reglued, and refinished. All window sashes were replaced, as were the mirrors, with beveled glass. Beams were refinished. The door to what is now the gallery was expanded from a single to a double door, and matching pediments were constructed for it. 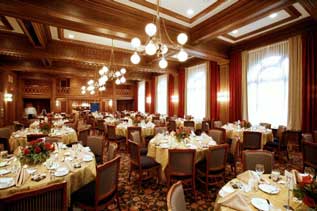 A gift from Bill Tillotson ’52 and his wife Carol Hefren Tillotson ’54 brought this dining room back to its original glory. Local craftspeople rebuilt the fireplace mantle, pillars and gallery railing using old photographs as a guide. Ten to fifteen coats of paint were meticulously removed from the oak-paneled walls during restoration. 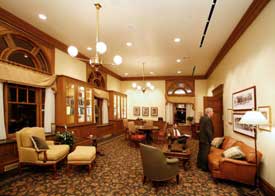 The Parent Library now serves much the same purpose that it did when Cochran Hall first opened in 1908 – a strikingly beautiful space for relaxation and reflection. Originally known as the “lounging room,” it was finished in oak, and all of its furnishings were leather upholstered. Restoration of the Library was made possible by a gift from longtime Allegheny supporters Dr. Fernand “Pete” Parent ’53 and Mrs. Evelyn (Koston) Parent ’53.

The Tippie Board Room 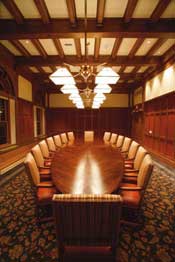 The “club dining room,” as this room was originally known, accommodated 60 guests. It was finished in the oak wood style of the other rooms and featured elegant, red woven silk wall coverings. The room was eventually converted to serve as office and meeting space, and both the silk and the wood on the walls were covered by white paint. While neither the silk nor the wood could be properly restored, both were replaced to replicate the room’s original appearance. The Tippie Board Room is named in honor of Henry Tippie and Patricia Bush Tippie ’56. 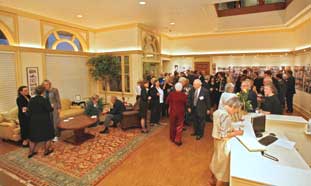 The Gallery space was originally a one-story kitchen that serviced the dining areas of Cochran Hall. In more recent decades this room housed bulk mail processing and other post office functions. The Tippie Center renovation transformed this space into a handsome new east entrance and gallery space that open to a mezzanine and skylight in the Alumni Office Suite above. The Hoag Gallery recognizes the generous support of Dave H. Hoag ’60 and Priscilla Booth Hoag ’62. A handsome handcrafted staircase was constructed just off the gallery to provide access to the offices of Development and Alumni Affairs on the second floor.