Communication, Film, and Theatre at Allegheny College has a long history of supporting undergraduate research in the humanities. Thanks to the Andrew W. Mellon Collaborative Undergraduate Research in the Humanities grant, and new Richard Cook and Teresa Lahti Scholars Symposium, students have the opportunity to work on research projects with faculty under school-wide, department-specific, or project-specific grants. 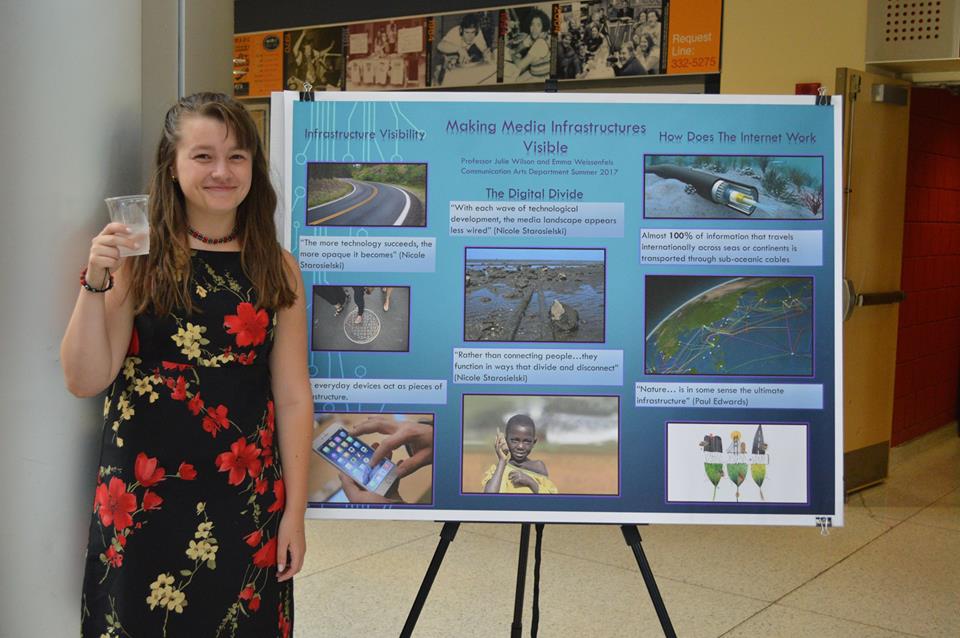 In keeping with Allegheny’s commitment to provide students with a liberal arts education that meets the highest standards, the Senior Project is not a mere report or semester paper, but a significant piece of independent study, research or creative work conducted under the supervision of one or more faculty members.

The outcome of a Senior Project is more than a grade or a written document; for the student it often results in a new way of looking at complex problems and inspires an appreciation for the power of ideas that might previously have seemed like abstract concepts in a textbook. Often it can be a pivotal time when a student realizes his or her own abilities and potential. The Senior Project also improves opportunities for graduate school and employment. Infrastructures like roads and buildings are vital to society. This summer Emma Weissenfels and Professor Julie Wilson studied media infrastructures, from underseas cables and data centers. Delving into the largely hidden workings of digital technologies and communication networks, they worked to understand the rapidly evolving and powerful infrastructures that undergird our everyday lives.

Under the supervision of Prof. Ishita Sinha Roy, Margaret researched how the representations of the white rural working class in recent country music and the 2015 Trump campaign have been seamlessly linked with the image of the blue-collar billionaire, to produce a white nationalism that supersedes class differences.  Margaret presented her work at the ACRoSS venue and will be developing this research into her Senior Thesis project.

Explored entanglements of digital media in youths’ everyday lives in Meadville as one element of a larger “Meadville Media” project (with Professor Julie Wilson) examining local media institutions and interactions. Sophie and Meric completed and transcribed approximately 20 in-depth interviews with Meadville youth and conducted many hours of participant observation in community spaces such as Tarot Bean Coffee Shop and Purple Fox Games. Meric also attended the Oral History in the Liberal Arts Institute at Kenyon College with former Mellon Fellow Chelsea Contino, ’18, and both Meric and Sophie developed blog posts for the Oral History in the Liberal Arts website (ohla.info)

Arianna O’Connell worked with Professor Joe Tompkins and Building Coordinator of the Vukovich Amanda Allen to create  update the Communication Arts website to make it more accessible to students. After noticing that Communication Arts students felt the need for more resources and direction in what they would be able to do with their degree, Arianna began working with Professor Tompkins and Vukovich Building Coordinator Amanda Allen, to collect student and alumni stories, collect data on the whereabouts and internships career possibilities for graduates with ComArts degrees.

This summer Professor Julie Wilson and Communication Arts major Amanda Fox worked with an interdisciplinary team of faculty and students from Economics, Computer Science, and Art to establish Zip Creative, an Allegheny student-run media agency that will offer services like video production, web development, and graphic design to the community.

Explored the ways in which the idea of “welcoming the stranger” and the “stranger” in general from Biblical verses are being deployed in today’s immigration reform.

She worked this summer with a grant through the Provost’s Office to develop an online multimedia undergraduate journal with Professor Ishita Sinha Roy.  The journal will accept blind-reviewed undergraduate scholarship and research-based creative work that is interdisciplinary, and addresses issues related to diversity, cultural/critical studies, and community and social justice. 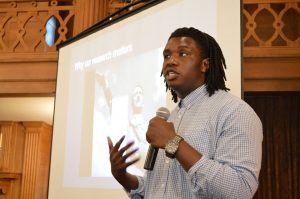 Rosa Orduno ’19, Brian Hill ’19 and Carina Saldivar ’19 with Professor River Branch, Exploring the role of the individual in replicating and perpetuating systems of abuse.

Through the Mellon Summer Research Fellowship and the Christine Scott Nelson Faculty Support Fund, Brian Hill  Rosa Orduno, and Carina Saldivar, conducted preliminary and primary research for Professor River Branch’s experimental documentary exploring the role of the individual in replicating and perpetuating systems of abuse.  Research spanned from close analysis of the complicity of individuals in historical atrocities and the contemporary political context, to psychiatric examinations of conformity, to non-fiction and fictionalized explorations of conformity and perpetuation in film, literature, music and theatre.  Hill, Orduno and Saldivar unearthed and synthesized the data from this research both in written and visual forms.  Their work provides a critical foundation in the development of Branch’s documentary. 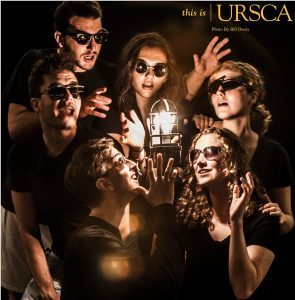 The company was formed in Fall 2014 and presented the performance in Fall 2015.
–adapted story by Natasha Torrence
–photo by Bill Owen