The History department is pleased to announce the following prize winners for the 2019–2020 academic year. Robin Laurinec received the Don M. Larrabee History Prize for best senior thesis, for her English/History double major, “Bloody Skyscrapers: Chicago and the Rise of Urban Serial Killing”. Brady Spaulding was awarded the Harold Huntley Haine Prize, which recognizes a senior History major who has demonstrated both academic promise and performance in the field of History, with a senior project titled “Take Our Land, Deny Us Our Culture, and Compromise Our Religious Freedom – Native American Indians”. Juniors Autumn Foreman and Maximus Levinsky shared the Outstanding Junior Major Prize, awarded for exceptional academic achievement, performance in the seminar, and contribution to the general life of the History department. Robert Crowe was presented with the Interdisciplinary Studies Senior Prize for his project for a double major in Economics/History, “Labor-Managed Firms in Yugoslavia: An Economic and Historical Analysis.”  Congratulations to all of these students!

If you think of the Middle Ages as little more than dirt, blood and Bubonic Plague, recent Allegheny College graduate Madeline Hernstrom-Hill can enlighten you.

“Sure, all that is there, but there is also so much more — complicated medical manuals, treatises about forms of government, astrological thought, trade across incredible distances, I could go on,” says Hernstrom-Hill, Allegheny Class of 2018.

And go on she will — to England, through a year-long Fulbright award to pursue a master’s degree in medieval history at the University of Leeds beginning this fall.

When she was 12, Hernstrom-Hill (at the prompting of her mother) read The Crystal Cave by Mary Stewart. That work sparked her interest in the Arthurian Legends and medieval times.

“It’s such a vibrant time, from the gold inlay on illuminated manuscripts to the types of stories they told each other about knights and monsters and ladies, many of whom don’t match up at all to our modern notion of the medieval damsel,” Hernstrom-Hill says.

After arriving at Allegheny from her home in Boston, Hernstrom-Hill began to take courses in medieval history and literature with Jennifer Hellwarth, professor of English, and Stephen Lyons, retired professor of history.

Hernstrom-Hill credits Allegheny with teaching her how to conduct independent research and to ask the right questions about it. Even more, Hernstrom-Hill says she has learned to listen to the responses she gets — “to conduct a dialogue, whether between yourself and your subject material, or with another scholar, or with really anyone who has a different perspective than your own. I think that’s a hugely important skill for trying to get the most out of an international experience.”

Hernstrom-Hill will bring impressive academic credentials to her Fulbright experience. At Allegheny, she not only majored in both history and English but also completed two minors: classical studies and medieval and renaissance studies. Her senior comprehensive project explored medieval women from three different faiths during the Crusades.

Patrick Jackson, director of national fellowship advising in the Allegheny Gateway, notes that Hernstrom-Hill took full advantage of all the resources that the College offers as she pursued her interests. For example, she received funding to conduct summer research on campus and to attend a conference in her field hosted by Western Michigan University.

“Madeline did all of this not knowing that it would be the foundation for a successful Fulbright, but because she was interested in pursuing an idea that moved her,” Jackson says. “That’s the secret strength of a liberal arts education. By following our passions where they lead, we often wind up advancing not only our careers, but our lives.”

Hernstrom-Hill says she is grateful to her mentors at Allegheny, and she wants to follow in their footsteps and ultimately become a professor. Following her time in England, Hernstrom-Hill will begin the Master of Fine Arts in creative writing program at Northern Michigan University, where she has already been admitted. She hopes to go on eventually to earn a Ph.D.

For now, though, Hernstrom-Hill is focused on making the most of her Fulbright award and studying in England.

“I hope to meet other people who are totally in love with the Middle Ages,” she says. “There’s a wonderful community of medieval scholars out there, and a lot of them spend time at Leeds.”

Allegheny College will host the northwestern Pennsylvania National History Day academic competition on Saturday, Feb. 24, with middle- and high-school students presenting projects related to the theme of “Conflict and Compromise in History.”

More than 20 students from schools in Erie, Crawford, McKean and Warren Counties are set to participate in the regional event. Students work closely with their teachers and present the products of their independent research in the form of multimedia documentaries and exhibits, and as websites and essays.

“The Allegheny College History Department is very excited to host the National History Day competition for the first time,” said Judson Herrman, Frank T. McClure professor of Greek and Latin and chair of the History Department. “We look forward to welcoming students and teachers from around the region to our campus and seeing the creativity and hard work that students have invested in their projects. Allegheny has a long tradition of pride in student research, and we are excited to connect with local students who are dedicated to independent scholarship.”

Faculty and students from the Allegheny History Department, along with other area university and high school faculty, will serve as judges at the competition.

Established in 1974, National History Day is a nonprofit education organization that offers year-long academic programs that engage over half a million middle- and high-school students around the world annually in conducting original research on historical topics of interest. National History Day also seeks to improve the quality of history education by providing professional development opportunities and curriculum materials for educators.

Brian Miller, visiting assistant professor of history, presented a conference paper entitled “‘Turkey will be Delighted’: Transnational Discourse on Turkish Modernization in the Pages of the 1960s Anadolu Gazetesi,” at the 41st Annual German Studies Association Conference in Atlanta, Georgia, in October 2017.

Allegheny College senior Madeline Hernstrom-Hill has won the Stony Brook Short Fiction Prize for her short story “The Church of the Reformed Eden.”

The prize, awarded to an outstanding undergraduate author, includes a $1,000 prize, a full scholarship to the Southampton Writers Conference in July 2018 and consideration for publication in The Southampton Review.

“This story features a remarkably complex, compelling, and humane look at some of the most important issues of the day: immigration, religious extremism, our destruction of the planet, same-sex partners, for example,” Hempel wrote in praise. “But there is never an agenda, rather they appear as part of a decent woman’s experience, a woman who is making her way in Florida to support her family in the Dominican Republic. In strong, assured prose, the author shows us what it is to try to navigate this difficult terrain while protecting one’s sense of oneself and staying open to possibilities that appear in truly surprising forms.”

Hernstrom-Hill, a double major in history and English with an emphasis in creative writing, wrote and revised “The Church of the Reformed Eden” as part of a combined senior comprehensive project and independent study group mentored by Matthew Ferrence, associate professor of creative writing. She described the work as speculative fiction.

“A woman immigrates to St. Augustine, Florida, from the Dominican Republic and accidentally falls in love with a female priest whose religion is on the wacky side,” said Hernstrom-Hill, 21, of Boston. “Everything spirals from there.”

The prize and Hemphill’s praise are validating, she said.

“My great fear, and the fear of a lot of undergraduate writers, is we write as undergraduates and we don’t actually go on and get into this community of people who write (beyond college) and are able to make a career out of writing,” Hernstrom-Hill said. “It’s super validating to have someone in that circle say nice things about my writing. It makes me feel happy about my possibilities after graduation.”

The 12-day conference, her first, is a chance to improve her writing and “see writers who are outside of college and be able to speak to people in the field and get a feel for how you actually do this,” she said.

Hernstrom-Hill credited Allegheny’s creative writing program for giving her the confidence to submit the story for consideration.

“I wouldn’t have produced this without being part of this supportive, very passionate creative writing community,” she said.

Madeline Hernstrom-Hill ’18 was awarded the Stony Brook Short Fiction Prize for her short story “The Church of the Reformed Eden.” The prize includes a scholarship to the Southampton Writers Conference in July. 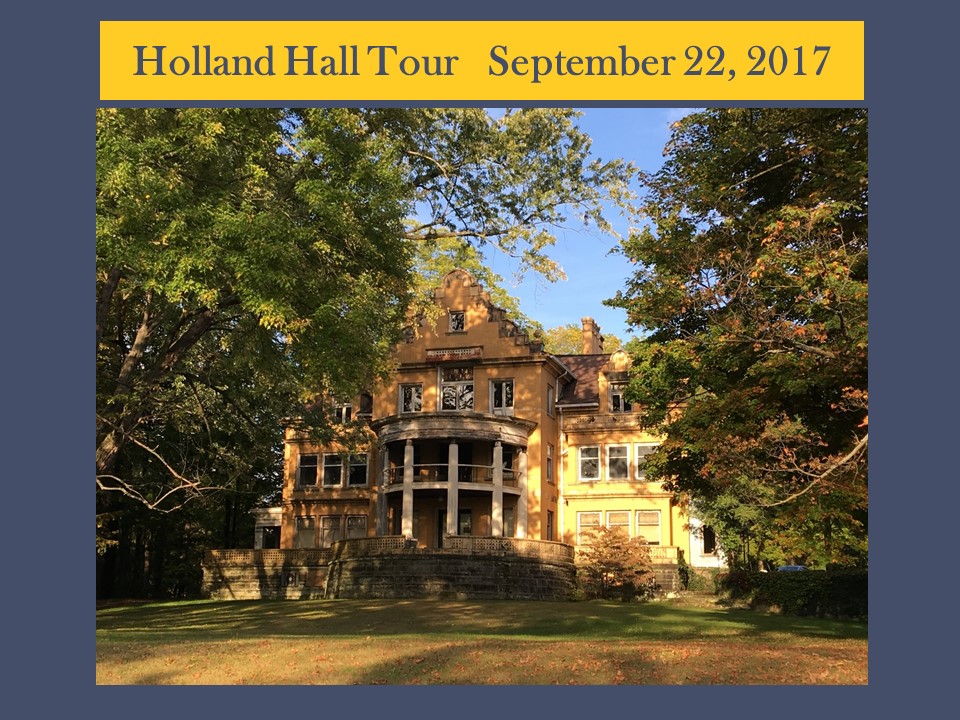 On Friday, September 22, the History Department coordinated with the Crawford County Historical Association to lead a group of more than 70 community members, including many History faculty and students, through a local historical site. Holland Hall, the former Huidekoper Mansion (located near campus at 681 Terrace Street) was built in 1899 for Arthur Clarke and Frances Reynolds Huidekoper, daughter of the Baldwin-Reynolds House Museum’s William and Julia Reynolds.  Dutch Revival in inspiration, the home served the family until the 1930s when, after the owners passed away, their children moved to Conneaut Lake and deeded it to Allegheny College. It served as the Phi Delta Theta House for many years, and now, after a period of private ownership, work is underway to return it to its former beauty. The Department was delighted to have the opportunity to connect the College community with our local history. 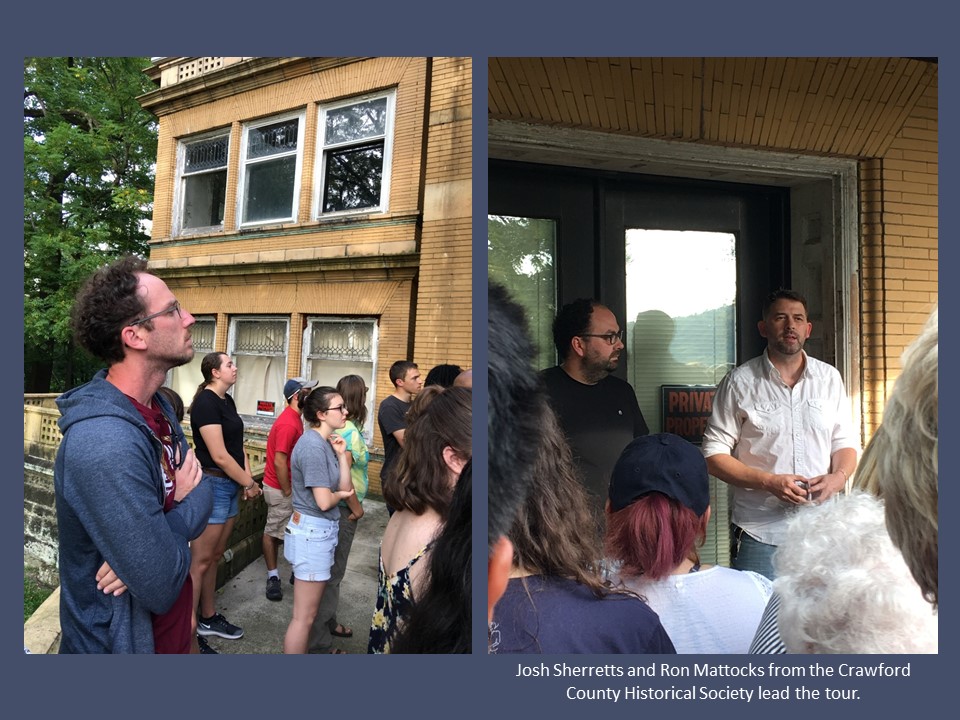 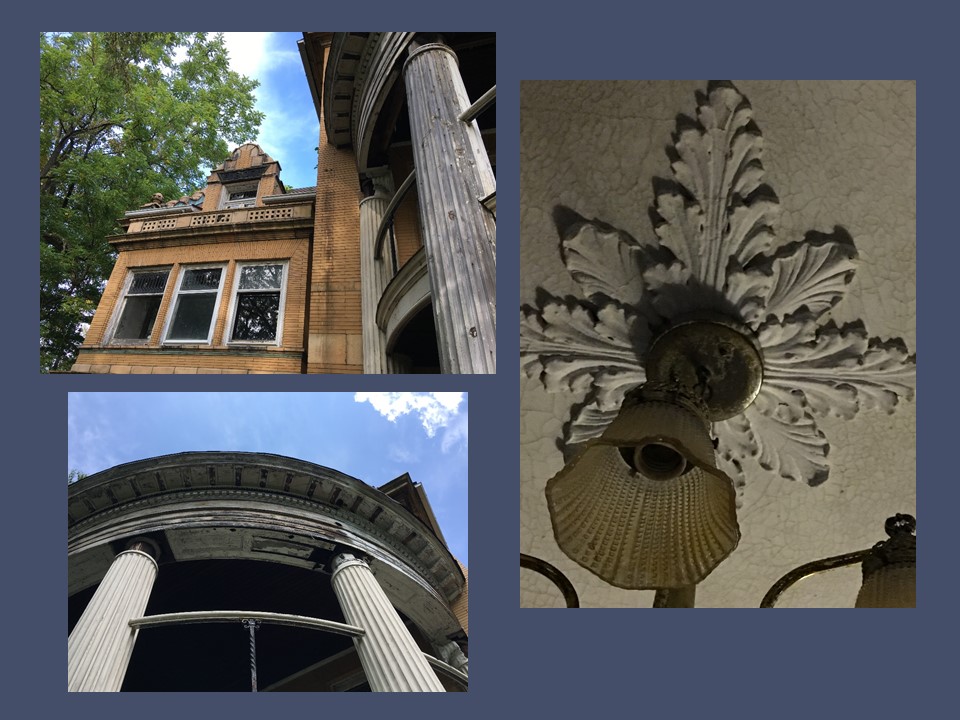 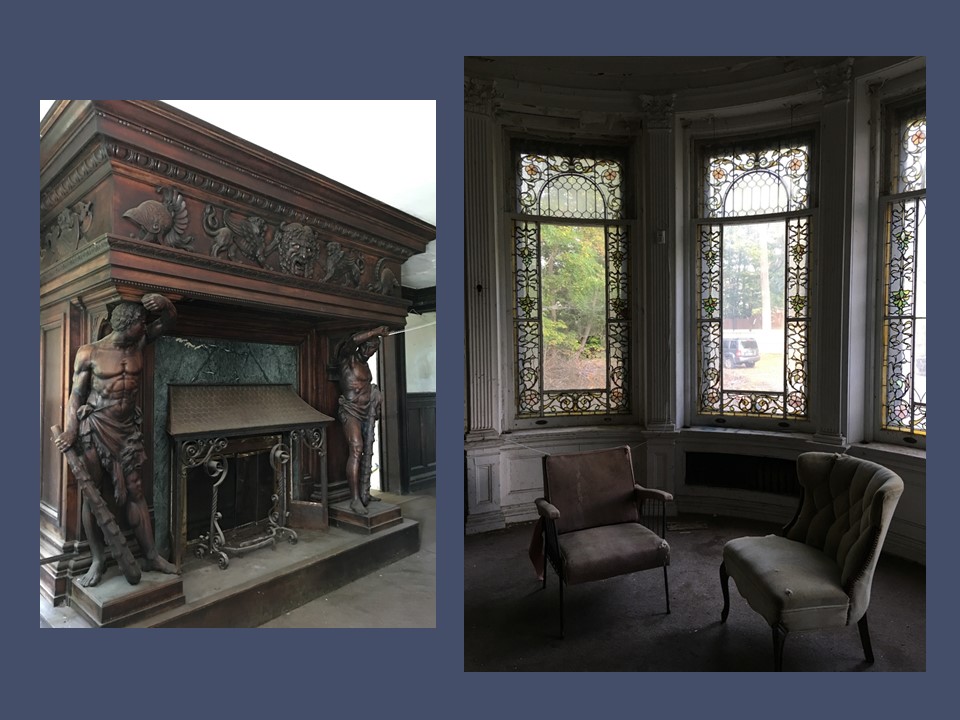 Associate Professor of History Guo Wu published a research article titled “Zheng Zhen and the Rise of Evidential Research in Late Qing Northern Guizhou” online in Journal of Chinese History (Cambridge University Press) in August, and another paper titled “Outsourcing the State Power: Extrajudicial Incarceration During the Cultural Revolution” appears in China: An International Journal (National University of Singapore Press). vol.15, no.3, (August 2017). In early May, he presented a paper “American Studies on Chinese Ethnic Minorities and Borderlands” to the Chinese Conference on Sinology and Translation, Nankai University, China, and in June, he presented a paper titled “‘A White Horse is Not a Horse’? Rethinking Pre-Qin Chinese Sophism in Light of Aristotelian Epistemology”, to the annual conference of the Society for Asian and Comparative Philosophy at Peking University, China. In May 2017, he was invited by the College of Ethnology and Sociology, Central-Southern University of Nationalities (Wuhan) to deliver a talk titled “American Studies of Modern Chinese History: Present and Future.”