Commitment to Summer Research Leads to Presentation at National Convention

“I don’t feel like I’m teaching them, per se. They’re teaching me about something that I’ve always wanted to learn.” 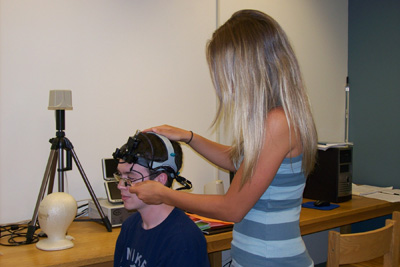 After three summers dedicated to research, Julia Harris and John Mahalchak, both senior neuroscience and psychology double majors, earned the honor of presenting at the Association for Psychological Science Convention. A rare but rich experience—contributions to the convention are typically reserved for graduate students or professors—Julia and John’s research explores cognitive studies of eye fixations.

The study involved the use of an eye-tracker, a piece of equipment not often found at a small liberal arts college. The eye-tracker is able to measure the time it takes for the eye to reach a key object, the amount of fixations made on the object, and how long each fixation lasts. The first students at Allegheny to use the instrument, John and Julia explored whether outside factors can unknowingly influence perception.

“Basically we’re studying how context affects the way we look at things,” says John. “We’re using information that you might not even be aware of to change the way you consider pictures. People listen to sentences, and we observe the way they look at a ‘Where’s Waldo?’ kind of picture. Then we see if the sentences they listen to change the patterns their eye uses.”

John and Julia shared their findings as a poster presentation at the APS convention among hundreds of other research teams. Although their project took an extensive amount of time, including a year and a half learning how to use the equipment, the students agree the investment has paid great dividends.

“It was a learning process, and just getting interpretive results was rewarding for us,” says Julia, “but getting accepted to the conference was great because people would be interested in the kind of work that we were doing. It was good to hear different perspectives and to find out how others were analyzing this difficult eye-tracking data we were working with.”

Julia and John’s advisor, psychology professor Aimee Knupsky, credited the students for the eye-tracking research, noting that it was a learn-as-you-go process for all involved. “I don’t feel like I’m teaching them, per se,” says Professor Knupsky. “They’re teaching me about something that I’ve always wanted to learn.”

Both John and Julia benefited from the opportunity to make their own discoveries – and learn from their mistakes – throughout the study. “The conference was the capstone to everything we’ve done,” says John. “We had little milestones along the way, but the conference has been our end goal. We wanted to not just share our research but also to get to see what so many other people are doing.”