“Even though I’m a chemistry major, that doesn’t mean I can’t do research with a computer science professor.” 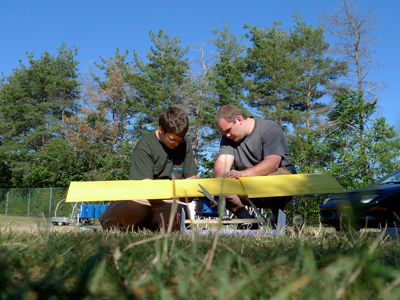 Allegheny computer science professor Matt Jadud and chemistry major/psychology minor Ian Armstrong might not seem like the typical student-faculty collaboration. They met in an even more unlikely way.

“Matt came strolling into my parent’s hobby shop one day last summer and basically said ‘I want a flying robot,’” says Ian with a laugh. “It just so happened that I was a student at Allegheny and knew how to fly remote-controlled airplanes.”

What began as Professor Jadud’s dream for a flying robot and Ian’s interest in miniature planes has since transformed into a multi-disciplinary research project. Ian, with the help of Professor Jadud and fellow students, is creating a small, robotic aircraft known an unmanned aerial vehicle (UAV).

“Our goal is to have the UAV used somewhere where they do long-term research studies and need to document everything very well,” says Ian. “Geology or biology researchers could put all kinds of sensors and cameras on an airplane like this and have it fly itself. It could take pictures at the same GPS points year after year.”

Controlled by an autopilot, the UAV uses a parallel programming system to perform multiple functions simultaneously, such as checking on sensors or orientation. The plane will be able to follow navigation coordinates and fly up to two miles from the controller. In accordance with FAA regulations, the UAV will allow its operator to regain control of the aircraft in case of an issue. 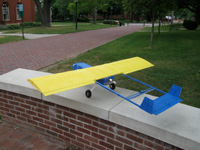 Although their collaboration may have seemed unlikely at first, Ian and Professor Jadud agree that it has evolved into a practical application of both of their fields.

And Ian appreciates that Allegheny provided an environment that encourages collaboration across academic disciplines. “Even though I’m a chemistry major, that doesn’t mean I can’t do research with a computer science professor,” he says. “Just be proactive and take advantage of those opportunities. I’ve gained research experience and the knowledge of how to bring things like this to reality.”