“As a biology major, I would have never expected to be able to experience a trip that would target my passion for the theatrical arts.” 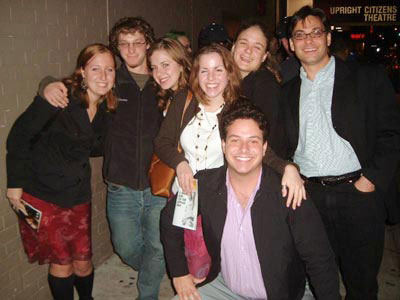 Professor Mark Cosdon asks students in his junior seminar in American theatre to stay informed of current developments within New York theatre. They read the New York Times, the Village Voice, Playbill, Backstage and other print resources. “During my four years at the College, I’ve consistently heard from my students that they wish they could actually study in New York and experience some of these events for themselves, rather than secondhand,” says Cosdon.

With funding from the Dean’s office, Cosdon transformed that wish into reality. He and six of his students traveled to New York for five days of theatre, workshops and meetings with professionals. The funding helped to defray the costs of the participants’ theatre tickets, lodging, food and travel. Students saw four Broadway and off-Broadway productions, as well as an improv performance. Each of the productions was discussed at length during morning seminars.

“Our conversations each morning were productive and deep,” says Cosdon. “We were pushed to think about the making of theatre in ways that can’t possibly be undertaken in our Arter Hall classroom.”

Students also met with a variety of professionals working in New York theatre, including an Allegheny alumna with the Pearl Theatre Company. As a result of that connection, one student is pursuing an internship with the company. “This opportunity has been an extremely special one for me because I had never seen New York or a Broadway show,” says student Caitlyn Smith. “As a biology major, I would have never expected to be able to experience a trip that would target my passion for the theatrical arts.”

Jenna Wagner notes that one of her best memories from the trip was watching the Tony award-winning play Doubt. “We were sitting on the edge of our seats,” she says, “completely absorbed by the riveting performances of four amazing actors who brought a story to life that kept us in discussion long after we had left the theatre.”