“The faculty really take a personal interest in what you would like to do with your future and move heaven and earth to give you as many opportunities as they can.” 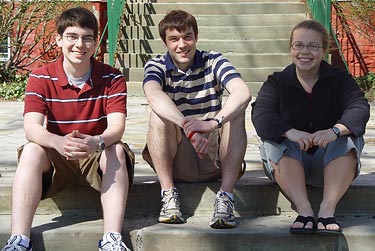 Bonnie and Damon performed in 2006 and 2007 with the prestigious National Wind Ensemble, which is open by audition to every college and high school musician in the U.S. Music faculty members Lowell Hepler, Ronald Stitt and Julie Hepler accompanied the students on the trips to New York City.

“The faculty really take a personal interest in what you would like to do with your future and move heaven and earth to give you as many opportunities as they can,” says Damon, who plays trumpet and runs on the College’s cross country and track teams. He came to Allegheny intending to major in English. But after taking several classes in the music department and working with its professors, Damon changed his mind.

Bonnie—a tuba player who planned on attending law school when she started at Allegheny—explains that the music department is like a second family for students. “The faculty have a passion not just for music but for people, which isn’t always the case, especially when you get people who are at really high performance levels,” she says. “They’re very nurturing, kind of like our extra parents.”

And it’s not only music majors who benefit from that support and interaction. Biology major Chris Wahlmark performed as first alto saxophone with the National Small College Intercollegiate Band at the University of Michigan. “I’m not treated any differently in the music department even though I’m not a major,” he says. “Professors still recommend me for all these bands and they’re allowing me to perform solo pieces with ensembles. I really appreciate that because music is still a large part of my life.”

Bonnie and Damon plan on pursuing graduate-level education in music and then careers teaching at small colleges, while Chris would like to continue studying biology in graduate school.

“As you get to college you sort of realize what your passions are,” says Damon. “You can’t deny what you really like to do.”