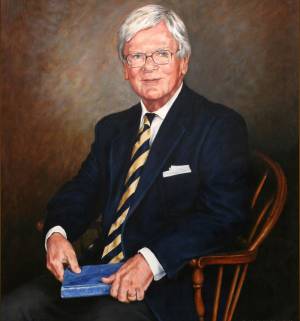 David Baily Harned became president of Allegheny College after establishing a distinguished record as professor and chair of the Department of Religious Studies at the University of Virginia, Charlottesville.

Born in Allentown, Pennsylvania on June 5, 1932, Harned graduated from Yale University in 1954. The next year was spent in study at New College in Edinburgh, Scotland. In 1957 he received a Bachelor of Divinity degree from Yale Divinity School. He then earned MA and PhD degrees from Yale in 1959 and 1963. He was ordained in the Pennsylvania Synod of the Lutheran Church of America in 1961. Except for Timothy Alden, he was the only non-Methodist of the thirteen clergy among Allegheny’s presidents prior to the millennium.

For three years beginning in 1957, Harned was an assistant instructor at Yale. The next year he spent at Williams College. From 1963 to 1967 he was assistant and associate professor at Smith College before moving to Charlottesville. At the University of Virginia he created dormitory seminars for first-year students that proved effective in personalizing education in a large university. In 1978 he won the Most Distinguished Professor Award. He also taught abroad, in the 1970–71 academic year as visiting professor of Christianity at Punjabi University in India and as visiting professor at the University of Edinburgh, Scotland, in 1972, 1976, and 1979. He produced scholarly books on a regular basis. From 1965 to 1980 he published six; especially noted was his 1967 volume on The Ambiguity of Religion.

An accomplished scholar and teacher, Harned was attuned to faculty concerns. Aware of mounting salaries in the increasingly competitive academic market place, he arranged substantial increases for continuing faculty and improved and updated faculty fringe benefits that had severely lagged. New tenure and promotion procedures were introduced that responded to current legal trends and the need for increased documentation. Computer science offerings were augmented and the aquatics environment major expanded into a more inclusive environmental science major. More foreign students were brought to campus, adding to its international perspective. Harned believed it was incumbent upon him to arouse the campus by inducing change. Personnel shifts took place in the administration and he pressed for curriculum review. Several areas received additional staffing, especially the development office. A $20 million capital campaign was begun. The annual fund grew from $400,000 to over $1 million. Another goal that Harned coveted was a loftier image for the College, and he actively compared Allegheny with other institutions such as Williams College. He made his staff more aware of statistical measurements of finances and qualifications of entering students as ways of building the reputation of Allegheny.

President Lawrence Pelletier had commented toward the end of his term that the tasks of a college president were becoming increasingly difficult for scholars, teachers, and educators. The demands of fund raising, budgeting, lobbying, and balancing multiple constituencies required administrative specialists. Harned never found these latter responsibilities palatable, and he experienced difficulty in mending rifts within his new administrative staff.  Connections with alumni faltered. When he accepted the presidency he spoke of a term of five years after which he would evaluate his success. The College undertook its own assessment as well, taking note of its special need for leadership of an expanding development program. After discussions with representatives of the executive committee of the Board of Trustees, on July 8, 1985, David Baily Harned submitted his resignation effective June 30, 1986, following a year’s sabbatical leave offered by the trustees. In 1986 Dr. Harned became Dean of the College of Arts and Sciences at Louisiana State University. Later in retirement he moved to Virginia and continued with his writing.