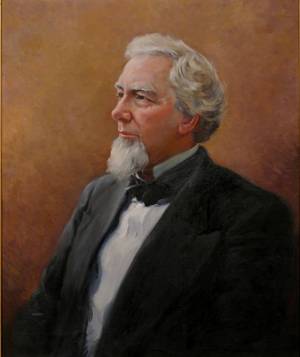 In 1852 Loomis became president of Wesleyan Female College in Wilming­ton, Delaware. His six years there were successful, but his northern sympa­thies led him to resign. In October 1860 he accepted the presidency of Alle­gheny College.

Loomis was a fine preacher and the recipient of an honorary Doctor of Divinity degree. His guttural perorations were such that the student body nicknamed him “The Great Iam­bic.” The adjective referred to his massive size, the noun to his prose. “Yank,” as he was also called by the students, seemed intimidating. This president was not as popular with the undergraduates as the genial John Barker. He was not physically graceful, yet his dis­tinc­tive charm and social skills won friends in the larger society, while his courage and calm leadership earned respect. Loomis strengthened science programs and focused on ex­panding the circle of sup­porters of the College.

Loomis staunchly sup­ported the Union. His finest hour, in the minds of his contempo­rar­ies, was the day the company of Allegheny vol­unteers departed to join the Union forc­es. He wished them Godspeed with an inspirational speech. Inevitably the war reduced enrollment. In 1862 when a move was afoot to send an­other volunteer detachment, the president urged the students to re­main on campus and com­plete their education. Most heeded his ad­vice. The ability of the president and the success of his work were such that in 1864 he was offered the presidency of Genesee College, a liberal arts college added to the campus of Genesee Wesleyan Seminary in 1850. The Allegheny trustees responded with a plea for Loomis not to leave, because a change in leadership “would be most untimely and disastrous to the interests of the college.” They assured him of their appreciation, continuing support, and “increased exertions to make Allegheny College in all respects what its patrons and its friends . . . have a right to expect of a first class college.” Loomis stayed.

Enrollment after the war rebounded only slightly. This problem, joined with the conviction of Loomis, the Pittsburgh Conference of the Methodist Episcopal Church, and some trustees that women should participate in Allegheny’s program, brought coeducation in 1870. The step was not without its critics but was accomplished fairly smoothly, in part because women stu­dents were few and far between, and in part because the president and a majority of the faculty and the hitherto all-male student body welcomed—or at least did not oppose—the new scholars.

Loomis had lofty ambitions for the College. The coming of the war curtailed them. They were further weakened by the collapse of the fortunes of Loomis’s friend and donor to the institution, Charles V. Culver. The latter’s fall took others down with him, to the chagrin of the College whose local reputation suffered. His gift of a large wooden dormitory, first named for Culver, then later retitled East Hall, could not be paid by him in full. Loomis’s ability to recruit new funds for the College was sullied. Strain deteriorated the president’s health, and he asked to be excused from teaching responsibilities from 1868 to 1870. He eventually returned to the classroom but did not teach in the fall and winter terms of 1871–72, pressed as he was with the College’s financial dilemmas.

Worn-out by the wartime struggle to keep the College going, weakened by the Culver fiasco, wearied by debates over coeducation and College gover­nance, and injured by a railroad accident, the dis­consolate Loomis retired in 1874. After a res­pite he assumed the initial presidency of the Foster School for Young Ladies in Clif­ton Springs, New York, in 1876, and guided it for ten years. He died on February 26, 1886.

Although Loomis’s vision for the College did not come to pass, undergradu­ates of those years, when older, remembered President Loomis as a hero. They saw him as a man who sacrificed personal goals and even some of the College’s own for the wel­fare of the coun­try. He taught them that loyalty to Allegheny meant loyalty to the United States. He is not commemorated on campus by any plaque or memorial. But a street built a few years after his departure, at the south edge of the campus along a line of property that he sold to the College in 1864, bears his name today.