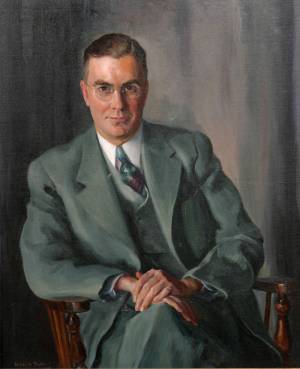 Born in Honesdale, Pennsylvania, on September 13, 1900, William Tolley grew up in Binghamton, New York. He excelled in public speaking and was valedictorian of his high school class. While at Syracuse University he misrepresented his age to volunteer in World War I, or so he later claimed. He saw no active duty, remaining on campus in the Student Army Training Corps. Tolley also sang in the Glee Club, played saxophone in a group he organized, the “Sinful Syncopaters,” and edited the yearbook. In his spare time he was president of the YMCA chapter and a shoe salesman.

He graduated in 1922 with Phi Beta Kappa honors. Intending to enter the ministry, he enrolled in Drew University while also taking graduate courses at Columbia University. He received a Bachelor of Divinity degree from Drew in 1925, a Master’s degree from Symmons University in 1924, and another Master’s from Columbia in 1927, followed by a PhD from Columbia in 1930. While at Drew he was alumni secretary for two years; he also taught philosophy and served as assistant to the president. In 1928 he became acting dean of the new undergraduate college for men at Drew, Brothers College, and full dean in 1929.

The Depression hurt many small colleges. Tough times called for strong action, and Tolley was prepared to take it in Meadville when he assumed the presidency of Allegheny on July 1, 1931. College requirements and curricula, he believed, needed streamlining to meet students’ individual needs. Programs were cut and athletic scholarships ended. New offerings were initiated, including Secretarial Studies. Inventory examinations were developed to measure educational progress, a first for American colleges. Allegheny became the first liberal arts college to operate a successful educational guidance clinic for high school students. Tolley’s aim was not to make the College bigger but to raise its quality. Placing Allegheny in the company of the nation’s very best small colleges was his unwavering goal. He did not shrink from gaining publicity for both the College and himself by adopting at Allegheny the role of a leading national spokesperson for educational reform and curricular innovation.

More than any previous presidents, he instructed the Board regarding national trends in education and their implications for Allegheny. As the trustees observed upon the tenth anniversary of his appointment, there were few administrators in the country who so “lived in the future” as did Tolley. When he left for Syracuse, the trustees lauded the president for carrying the College “to a fundamentally new philosophy of education.” “We say . . . that ‘Allegheny recognizes the fact of individual differences and adapts its program to meet the needs of the individual student,’[this] is the really revolutionary change that has been wrought.”1 A confident person, President Tolley projected an aura of leadership that came naturally but also was one he encouraged. Extremely neat and well combed in his appearance, he had the knack of making each person with whom he spoke feel that she or he was the sole focus of his attention.

He was also a master at praising others, but not insincerely or as a flatterer. Tolley called attention to achievement and accentuated the positive. He could charm; women found him interesting, perhaps because of his sense of humor and willingness to poke fun at himself.
In 1932 Tolley was appointed to the University Senate of the Methodist Episcopal Church,
a seat he held for nearly forty years. In 1964 he would provide the leadership that created the
United Methodist Higher Education Foundation. Tolley chaired the academic freedom and tenure committee of the Association of American Colleges (AAC) that with the American Association of University Professors formulated the famous 1940 Statement on Freedom and Tenure. In 1942 and 1943 he presided over the Association of American Colleges. After the United States joined World War II, he lobbied Congress for passage of bills creating the V-12 Program and the Army Specialized Training Program that would bring servicemen to depopulated campuses. A few years later he helped draft legislation that became known as the “GI Bill of Rights.”

Tolley and his wife Ruth, especially, loved Allegheny, wished its welfare, and later would enroll two daughters at the College. But Tolley’s interests and ambitions were broader than what could be fulfilled in Meadville. He saw himself as an apostle of higher education, enjoyed company with the influential and powerful, and needed a larger stage from which to launch his campaign for a new and reformed higher education.2 It was therefore not difficult for Syracuse University’s call on Tolley’s loyalty to take him there as its seventh chancellor in August of 1942. Tolley led Syracuse through the war crisis and through major expansion until his retirement in 1969. University assets grew from $15 million to $200 million; undergraduate enrollment expanded from 3,800 to 24,000, and graduate enrollment from 400 to 8,000. He maintained his reputation as a “hands-on” manager, a trait he said he developed as a dean and then as a small-college president. Tolley authored several books and received many honors, including a Doctor of Laws from Allegheny in 1943. In retirement he chaired the board of Mohawk Airlines. He died on January 26, 1996, in Syracuse, New York.

*This account is taken, with permission, from J. E. Helmreich, Through All the Years: A History of Allegheny College. Meadville, PA: Allegheny College, 2005.
1. Trustee minutes, 3 October 1942.
2. John A. Beach, “Minister of Higher Education: A Biography of William Pearson Tolley” ch. 5